Innovative Spaghetti for the Far North

The Far North now piques the interest of many countries, as it is rich with resources that are yet to be developed. For instance, last year the National Arctic Development Commission was founded in Russia. Those who are set on "conquering" the North face many challenges. One of them is how to feed everyone under cold conditions with difficult access to good roads, with food supplies coming once a year? Eating only canned foods won't do. ITMO University developed and patented a unique ultrasound technology for processing spaghetti that can really diversify the food of polar explorers. Today is World Pasta Day — so we will tell you about this innovative spaghetti with meat that has a shelf life of about a year and a half and can be shipped to the North by the slump, without breaking into pieces. 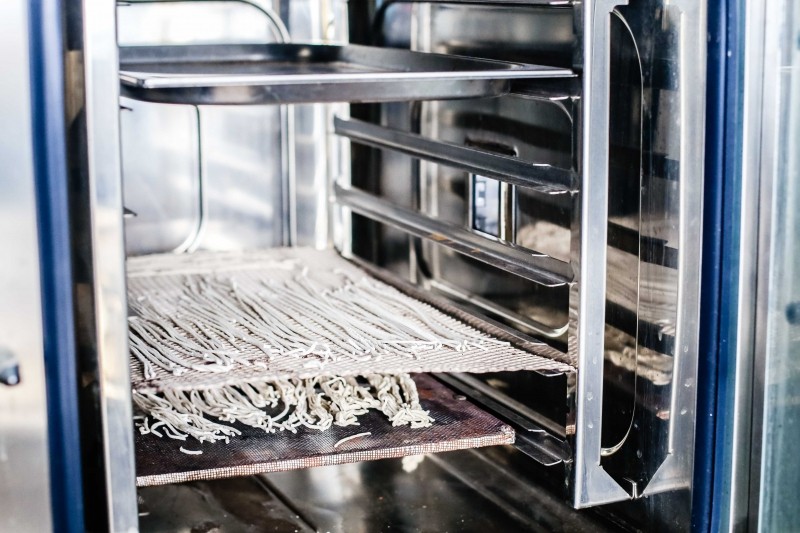 The innovative spaghetti are 70% straight white wheat flour and 30% gritted beef liver or chicken mince. This recipe is essential for the conditions of the North. In beef liver, there is a whole set of vitamins the polar explorers need: vitamin A, vitamins of B and P complexes, as well as other vitamins you can't get in the necessary amounts if you use synthesized ones. Formerly, one couldn't produce such a product: due to the high proportion of the meat additive, the product got spoiled even before dehydration due to the increase of acidity, and the spaghetti themselves chapped. ITMO's specialists found a way to press the dough using ultrasound in order to overcome such problems.

Scientists from the Department of Production Machines and Equipment started using ultrasound in 2013, when its PhD students won a grant and bought the necessary equipment.

"Using ultrasound, we get solid spaghetti: up to 1.4 g/cm3 instead of 1.24 g/cm3. The ultrasound's physical impact makes all of the flour particles move and squeeze out air and most of the moisture. Thus, the spaghetti's structure becomes less porous, and a protein coating appears on their surface — one that prevents oxygen, moisture and microorganisms from coming through. As a result, it prevents acidization and other processes that can spoil the product. Also, this makes the spaghetti 25% more sturdy. Organoleptic tests showed that our product can become popular among polar explorers: when you boil them, they smell pleasantly of liver", shared Valeri Antufiev, an Associate Professor of the Department of Production Machines and Equipment.

The sturdiness of the product allows to drop them from as far as 15−30 meters with no significant damage to it, which is important for shipping in the Far North. These spaghetti have a shelf life of about a year and a half, so the polar explorers can be sure their supplies will last until the next shipment. Also, such spaghetti doesn’t clot when the water boils slowly. Thus, they are a better choice for using in the Far North than regular spaghetti.

Soft straight white wheat flour that is used for the spaghetti is a conscious choice as well: this type of wheat grows both in the South and the North. Thus, one can get it from local suppliers even when the supply lines don't work. Also, it's a lot cheaper than flour from firm types of white wheat.

The proportion of liver was also calculated after a continuous research. The point is that 30% portion of the liver gives the necessary water to mix the dough. So, that gives a chance to produce these spaghetti not only at special production establishments, but on mobile plants right "in the field". In fact, transporting spaghetti has its challenges as they are fragile: one can't store more than 5 sacks on top of each other or they bottom one will get crushed, and it’s best not to throw them. So the new product solves many related problems. Also, if one eats 80 grams of these spaghetti a day, he gets the two-day amount of vitamins, which is really great under the conditions of the Far North.

"We've got two patents: one on the dehydration equipment, and the other on the spaghetti production technology. We are the pioneers of using ultrasound for these purposes. Why has no one ever done this before? Well, if you add more than 8% of additives, the spaghetti will crumble, as meat and other similar substances are particles of about 0.3 millimeter in diameter. But by using ultrasound, we can press the dough into an integral whole", comments Valerii Antufiev.

The specialists continue to test the spaghetti, using no special packages and in room temperature conditions. The experiment has been going on for eight months already. Afterwards, the samples pass an expertise to learn how long can they be stored under normal conditions.

The innovative spaghetti are really promising, as they can be used by the military and explorers, for working in harsh environmental conditions. In the nearest future, ITMO's scientists plan to try out other additives, as well. Representatives of several establishments, as well as some government institutions already showed interest in the new technology.