A group of Russian scientists have synthesized manganese–zinc ferrite nanoparticles that can potentially be used in cancer treatment. Due to their unique magnetic properties, the particles can serve as deactivators of affected cells while having almost no negative impact on healthy tissues. The results have been published in the Journal of Sol-Gel Science and Technology. 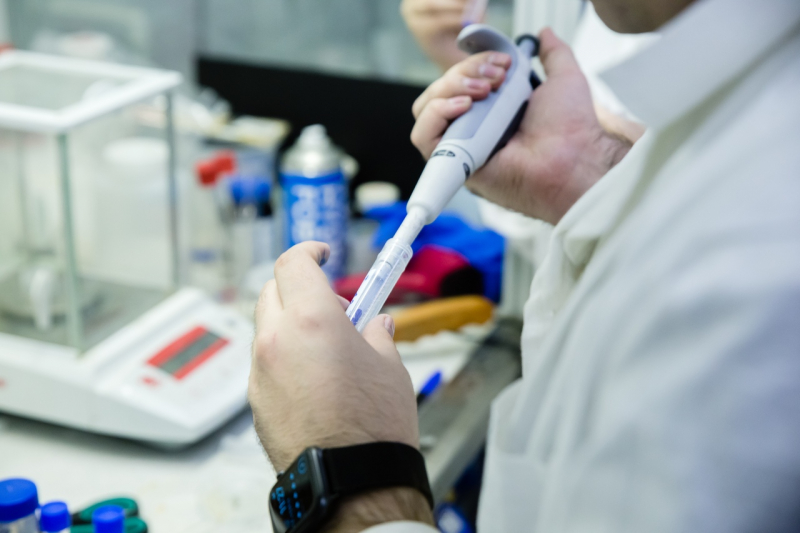 One of the most important global goals in today’s medicine is finding ways to combat cancer. Currently, there are several kinds of treatments with differing effectiveness and various side effects. In most cases, the treatment causes harmful impact not only to cancer cells but also the adjacent healthy tissues or the body at large.

“Magnetic fluid hyperthermia is a promising method in terms of alleviating the side effects of cancer treatment,” says Vasilii Balanov, Master’s student at ITMO University (the program Chemistry of Applied Materials) and one of the study’s authors. “This is a relatively new method which involves introducing a magnetic nanoparticles-containing sol into a tumor. Following that, the affected area is exposed to a variable magnetic field, which heats the nanoparticles so that they deactivate cancer cells. However, a problem arises – in practice, such particles get overheated; what’s more, the materials that are currently used are fairly toxic for the body.”

A potential solution to the issues of magnetic fluid hyperthermia are special nanoparticles capable of changing their magnetic properties depending on the temperature applied. In physics, there is such a notion as the Curie temperature (also known as the Curie point) – the temperature at which a second-order phase transition occurs in a physical body, that is, for example, a magnetic material undergoes a sharp decrease in magnetization. A team of Russian scientists, including those from ITMO University, decided to use the materials with a relatively low Curie temperature.

“When the Curie temperature is reached, a ferromagnetic changes into a paramagnetic, consequently the particles cease to be as susceptible to the magnetic field and their further heating stops,” explains Vasilii Balanov. “When the temperature drops back again, the particles resume their heating. Essentially, we observe a self-management of temperature in a narrow range. If we select a composition that experiences such a transition at the temperature we need, then it could prove effective for magnetic fluid hyperthermia.”

Zinc, iron oxide, and a little bit of manganese

Choosing the material, the scientists opted for ferrites – compounds of iron oxide (III)Fe2O3 with oxides of other metals. In general, due to their properties, these materials are widely applied in computer technologies, but, as it turned out, they can also be used for medical purposes. According to earlier studies, compounds of manganese oxide and iron oxide with partial substitution of Mn by Zn could have a suitable Curie temperature. It was important, however, to select the right amount of zinc.

“We took the particles with the general formula Zn(x)Mn(1-x)Fe2O4, in which zinc and manganese are selected in a certain proportion,” expounds Vasilii Balanov. “They don’t have a toxic effect on the body, and with the right ratio of manganese and zinc we were able to achieve a Curie temperature in the range of 40–60 degrees Celsius. This temperature allows us to deactivate cancer cells, concurrently, the short-term thermal contact is relatively harmless to healthy tissues.”

As of now, the scientists have already synthesized the nanoparticles and studied their magnetic properties. The experiments confirmed that the material doesn’t heat up above 60 degrees Celsius when exposed to a variable magnetic field. Their next step will be to work in vitro with individual cells, and, after the successful resolution of this stage, to move on to animal testing and further work on preclinical trials.