Some Like It Cold: ITMO Experts Talk Latest in Cryogenics

It’s a scorcher outside! Just the right time to think about the cold. And for a good reason: liquid helium, commonly used as a refrigerant, was first produced on July 10, 1908 by Heike Kamerlingh Onnes, a Dutch physicist who earned a Nobel Prize in 1913 for this discovery. Igor Baranov, head of ITMO’s School of Biotechnology and Cryogenic Systems, and Oleg Pakhomov, an associate professor at the Faculty of Energy and Ecotechnology, joined us to talk about cryogenic technologies and the latest advances in the field. 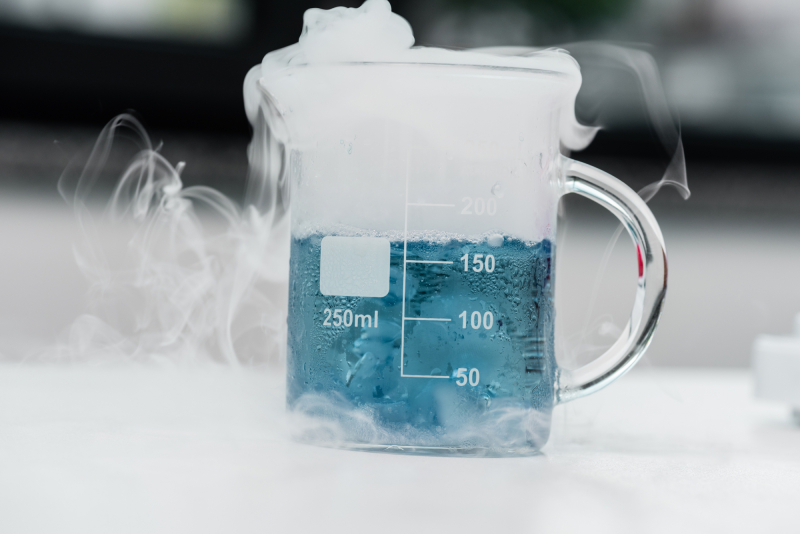 It all really started with helium. By the way, Heike Kamerlingh Onnes’ experimental set-up was only capable of producing just 60 ml of liquid helium in 12 hours! It was only in the 1930s that Pyotr Kapitsa designed helium liquefaction stations that could produce two liters of the substance every hour. Interestingly, helium was first discovered on the Sun before it was found on Earth, and its liquefaction process is highly difficult. Unlike many gases that turn to liquid through simple compression, helium requires something else – low temperature. Today, temperatures below 120 kelvin (the temperature at which natural gas condenses) are considered cryogenic. Meanwhile, the temperature of superfluid helium in vacuum is 2.173 kelvin. Below that is the ultra-low temperature range. The absolute zero, however, can’t be achieved – that’s a proven fact.

Low temperatures change the properties of substances and allow us to observe other, sometimes unexpected results, such as superconductivity and superfluidity.

Today, cryogenics is widely applied in many fields of industry and science. Materials science, quantum and nuclear physics, shipbuilding, space exploration, medicine, electronics – none of these fields can do without synergy with low-temperature physics. But historically, one of the first practical reasons for the development of artificial cold was the storage of products. This issue became particularly relevant during World War I: widespread mobilization of troops resulted in a severe need to provide large groups of people with food and to do it quickly.

“It won’t be an exaggeration to say that all Nobel Prizes in physics of late were, in one way or another, related to achievements in cryogenics. Gravitational waves, for instance, were detected using highly precise superconductive sensors; Ginzburg and Abrikosov received theirs for the development of theory of superconductors and superfluids; Kapitsa – for fundamental inventions and discoveries in the area of low-temperature physics; and Landau – for his pioneering theories for condensed matter, especially liquid helium,” says Oleg Pakhomov.

In late 2020, ITMO University launched the new Faculty of Energy and Ecotechnology – or GreenTech for short. Its students will train to be engineers for green industries of the new generation.

“Environmental standards are becoming more and more strict each year. It’s not enough now to simply chase after efficiency: you must take care that your power industry is “green.” Alternative and hydrogen-based technologies are not only just as effective as traditional power sources, but they are also harmless and result in zero carbon emissions,” explains Igor Baranov.

And it is excessive emissions that are a key cause of global climate change. But there is a solution. Cryogenic technologies allow us to collect CO2 to safely dispose of it later or to reuse it – for instance, in the production of dry ice or carbonated drinks. Maintaining low temperatures, among other things, is important for the preservation of coronavirus vaccines. A difference of a few tenths of a degree can be critical: the active substances will die and the vaccine will no longer be efficient. The Russian Sputnik V vaccine is less demanding: its storage demands a temperature of approximately -24 degrees Celsius; but European vaccines must be stored at the temperature of around -78 degrees Celsius.

Vehicles are going green, too. In Russia, the hydrogen-powered luxury vehicle Aurus has recently been unveiled. In China and Japan, maglev trains make use of the superconductivity effect. These trains can match airplanes, reading speeds of up to 420 km/h – but, unlike planes, produce no harmful emissions.

Sauna backwards or how to freeze an infection

Turns out cold can heal! Here’s a timely example: the novel coronavirus is quite literally making it hard to breathe. The virus attacks the lungs, which is why it’s important to supply hospitals with oxygen. To that end, doctors use special oxygen stations. These devices use cryogenic technologies to separate the individual parts of air and extract the most valuable and vital: oxygen. This technology is extremely relevant and crucial: just this past Sunday, the government of Singapore sent a shipment of medical oxygen to Indonesia.

But low temperatures have direct applications in medicine, too. Take the advanced and emerging field of cryosurgery. The idea is that if you were to freeze “healthy” and “ill” cells, the differences in their thermophysical properties will make them freeze differently. Then, they can be easily told apart. And following targeted freezing with the help of special medical devices – cryodestructors – the malignant cells can be more easily separated from the healthy ones. This is an approach used in the treatment of cancers and tumors. Research on this technology is conducted in collaboration with the Federal Medical-Biological Agency.

Another example of cryomedicine is cryotherapy. A special medical system called a cryosauna uses cryogenic gas to provide physiotherapeutic treatment to the patient’s skin. At temperatures around -170 degrees Celsius, the human body experiences stress and launches processes that facilitate its recovery and stimulate the immune system. Specialists in this field are trained at the School of Biotechnology and Cryogenic Systems within the subject area Refrigeration and Cryogenic Equipment and Life Support Systems (code 16.03.03).

Moreover, cryosaunas developed by ITMO specialists and their colleagues from the company Krion were used by athletes from the UK and Japan during the 2018 World Cup in Russia. This treatment allowed them to alleviate pain, accelerate tissue regeneration, and recover after difficult training.

We don’t let our phones out of our hands, not even for a second. Those, too, exist thanks to cryophysics. Indeed, to produce any microelectronics components, you need special clean vacuum chambers. The temperature inside them is extremely low, somewhere around 20 kelvin. At that temperature, everything freezes: fumes of water or oils and any other undesirable gas molecules.

Scientists are also currently working on computers that will use the Josephson effect in high-temperature superconductors for memory storage. But you shouldn’t think about what you’d consider “high temperature,” because that means a whole other thing in cryophysics. For instance, the “hottest” superconductors out there have a critical temperature of -105 degrees Celsius.

To present data as a conventional sequence of zeros and ones, these computers function in “normal” and superconducting states. Most importantly, these “cold computers” consume twice less power than regular ones. This is particularly important when it comes to working with massive amounts of data.

And let’s not forget that St. Petersburg is Russia’s cultural capital. You will hardly find a person who’ll agree that power lines add beauty and charm to the city’s look. Cryocables, or superconducting current leads, are a joint invention of ITMO University and the Efremov Institute of Electrophysical Apparatus and make it possible to not only quite literally “hide” the unsightly power lines, but to keep them cool, too.

You can learn all about this and other fascinating applications of cryogenic technologies, as well as take direct part in their development, at ITMO University by enrolling in one of the programs within the Refrigeration and Cryogenic Equipment and Life Support Systems subject area. The School of Biotechnology and Cryogenic Systems is home to educational programs of every degree level: from Bachelor’s to PhD. Moreover, Master’s students can join a double-degree program that’s implemented in collaboration with the Al-Farabi Kazakh National University (Kazakhstan).

“Our school possesses great expertise in cryogenic and thermophysical technologies. In 2020, only eight PhD thesis defenses in the subject area Devices and Processes of Cryogenic, Conditioning, and Life Support Systems were held in all of Russia. All eight of these brand-new specialists were graduates of ITMO University,” notes Igor Baranov.

Unique specialists call for a unique approach. ITMO University has that: the school’s lecturers are accomplished academics and corresponding members of the International Academy of Refrigeration, while its equipment pool and strong corporate connections allow students to acquire practical experience from the start of their studies.

A source of particular pride for the school is the unique educational laboratory of low-temperature physics. It uses an all-purpose laboratory suite that was developed in collaboration with the Faculty of Software Engineering and Computer Systems. The system can be used to conduct 12 different lab experiments on the study of properties under cryogenic temperatures.

Students of the school face high expectations, as training specialists who will one day work with such major industrial companies comes with great responsibility for everyone: the university’s teaching staff, the companies, and the students themselves.

“The students of our school can work in any field: from rocketry to nuclear physics. The advantage of the education we give to our students is that they acquire in-depth theoretical knowledge that is, nevertheless, not irrelevant to real-life commercial projects. Our educational programs successfully merge physics and engineering,” comments Oleg Pakhomov.