The International Laboratory of Biomechatronics and Energy-Efficient Robotics has created a prototype of an energy-efficient hopping robot. The design is based on flexible joints and a series elastic actuator. 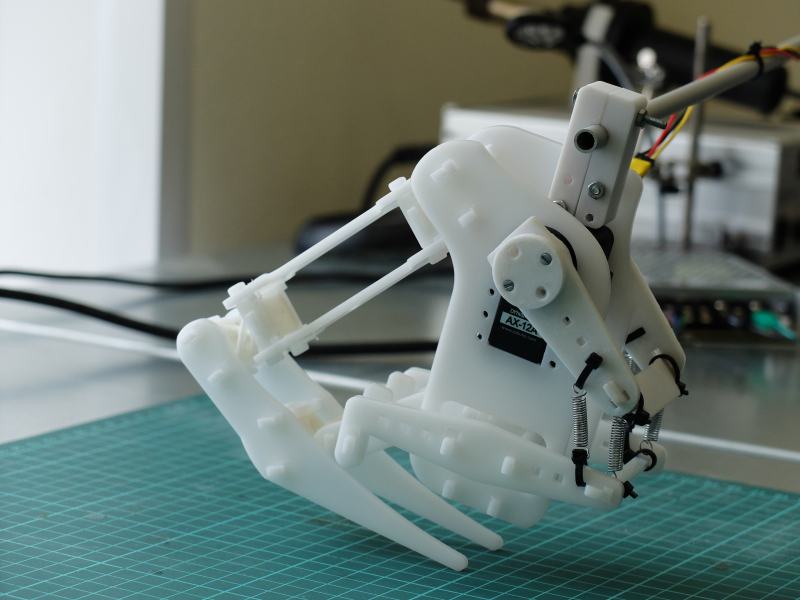 A team consisting of Kirill Nasonov and Dmitry Volyansky, Master’s students of the Faculty of Control Systems and Robotics, supervised by Ivan Borisov, a research associate at ITMO University, is working on a galloping robot with unique morphological characteristics. The main task of the team is to develop a light, compact, energy-efficient, and functional system. To achieve that, they use principles of biomimetics and morphological computation. According to Ivan Borisov, the goal is to create a device that would require as little control effort (energy) as possible, while being able to overcome uneven terrain, overcome obstacles, and be resilient to physical harm.

“Our task is to develop methods to design robots that will be able to operate in an unstructured and unexpected environment. As a platform for the approbation of methods and design principles, we are developing  a galloping robot that can move fast and consume little energy. Modern legged  robots such as Spot or Unitree usually look something like a stool with legs – an absolutely rigid body with open-kinematic legs. They have proved their efficiency: they can walk, run, climb, and do flips but they also waste a lot of energy. Running is a periodical motion. When they run, the mechanisms of their open-kinematic legs perform oscillatory motion. So they waste energy at every phase of the running cycle: they need it to accelerate, decelerate, accelerate in the opposite direction, decelerate again, and the cycle goes on.

What we want to achieve, however, is energy-efficient motion. We apply the principles of biomimetics, e.g. we observe how nature has been solving similar tasks during millions of years of evolution and transmit unique characteristics of living systems into robotics. One of the most energy-efficient and evident ways of motion is kangaroo jumps. The kinetic energy of these animals is transformed into potential energy stored in tendons and muscles when they hit the ground. When they jump again, it’s transformed back into kinetic energy. We have used a similar principle in our prototype,” comments Ivan Borisov.

Energy efficiency means using a limited energy budget most effectively. To minimize the control effort of motors, it is possible to  create a robot, for which much of the desired behavior is already present in the inherent dynamics of the mechanical syste , while the control algorithms  are only needed to excite, stabilize and augment  natural dynamics with little effort. Such a design principle is called morphological computation, when computation of control signal is carried out not only via algorithms but via a mechanical structure, e.g., its morphology. Thanks to the optimal distribution of mass, elasticity, and optimization of mechanical parameters, it’s possible to achieve the required dynamics with fewer and less powerful motors.

“The main actuator in this system is an extension spring: when the robot hits the ground, it stretches and accumulates potential energy, and when it jumps up again, the stored energy is transformed back into kinetic energy. Thus, energy gets recuperated and the motor only has to compensate for energy losses caused by impacts and friction,” explains Ivan Borisov.

Moreover, the robot’s body had to be made significantly lighter, which meant getting rid of weighty elements such as gear wheels, metallic axes, and bearing parts. In order to do that, the team used the research results of ITMO’s partner, the University of Twente (the Netherlands).

“We had a hypothesis about flexible joints: they can rotate at a certain angle, they are light, and they have no friction and backlash. Then we had to think about how to design them. The very task of designing joints is non-trivial – we can't just take some plastic parts and connect them at an angle – it should be calculated mathematically. The University of Twente has a laboratory that works in this field, and fortunately for us, their research is open to the public. We can see how they do it and, based on it, find our solution,” says Kirill Nasonov.

At the University of Twente’s laboratory headed by Prof. Dannis Brouwer, mechanisms with flexible joints are synthesized mostly for the sake of high-precision motion. In ITMO’s project, the mechanism was synthesized to reach the robot’s physical interaction with the environment. The joints were 3D printed from polyurethane – a flexible plastic with a stretching structure. They have a geometric three-part shape that provides the mechanism with flexibility, resilience, and resistance to deformations.

The rest of the parts are also plastic: body’s elements and links were cut from polyacetal with a laser and put together using plastic clips.

The hopping robot isn’t the final product but more of an object for testing the methods of morphological design and flexible joints in particular. No similar robots have been designed in such a way before. Moreover, the galloping robot is a good example for research to study  control methods and how a highly dynamic system interacts with the environment.

“We used series elastic actuators  and implemented a method of control not by the error of position, but by the error of potential energy stored in the spring. Our team’s students are at the end of their first year of Master's studies and this is the result of their work during this period. They were able to test in practice the skills of innovative modeling, non-standard methods of control, design, production of parts, and also got skills of programming a controller,” says Ivan Borisov.

The team plans to create a robot that not only jumps on the spot but can also move on uneven terrain. For that, they would need to synthesize a more complex mechanism that will be able to configure motion trajectory.