“Nanotech Appeared at ITMO Before It Became Popular”

From 26 to 29 April, will be the fifth STRANN (State-of-the-art Trends of Scientific Research of Artificial and Natural Nanoobjects) Conference held in St. Petersburg, devoted to nanoobjects. A key theme of the event, organized by St. Petersburg State University, OPTEC and ITMO University, is trends and techniques which enable current challenges in the creation and study of microscale and nanoscale objects to be solved. We talked to Alexandar Golubok, head of Chair of Nanotechnologies and Material Science at ITMO University, Doctor of Physical and Mathematical Sciences, also co-chair of STRANN organizing committee, about current trends in nanotechnology, promising directions, as well ITMO University’s place in the development of this field. 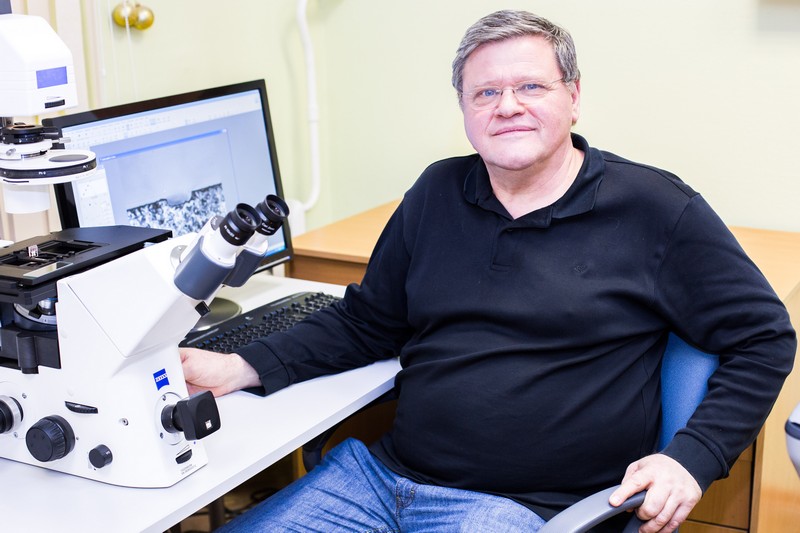 Everyone is talking about nanotechnology these days. Please can you explain what it is?

Formally, nanotechnology is considered to be anything related to creating or working with any object less than 100 nanometers. But from the physics point of view, this is not exactly correct. When we talk about nanotechnology, it`s not just about object size, what is important, is the new characteristics and attributes that we get out of it. Nanomaterials are materials whose properties can be controlled using nanotechnologies.

In medicine, nanotechnologies are used for targeted delivery of drugs, and in the future will be used for security systems. Nanotechnology is a complex area, using physics, chemistry, biology, and informatics, and its results can be used in many different areas.

In fact, nanotechnology is very complicated science, which includes discoveries made in physics, chemistry, biology, informatics and system modeling. Actually we cannot separate math, physics, chemistry and informatics. To comprehend the laws of nature scientists had to make all parts of knowledge structured. Today is a time for fusing all of them together. Nanotechnology is the very field to apply plenty of different practices.

Would you please tell us when and how ITMO University`s Research Center for Nanotechnology was developed.

About eight years ago the University applied for the state support program for organizing nanotechnology research centers in Russia and then was awarded with a grant. Currently Research Center for Nanotechnology focuses on five tracks mainly based on Chair of Photonics and Optical Information Technologies.

The Center is equipped with ZEISS CrossBeam Neon 40 equipment upgraded with Raith ELPHY Plus system, which serves as the main facility for our research. Using it we provide both visualization and diagnostics of nanoobjects as well the new activity like developing of micro- and nanostructures.

What are the applications of CrossBeam?

This equipment can be applied for three activities. The first one is diagnostics. We are dealing with small objects that cannot be seen under optical microscope but that are necessary to be controlled. Thus we use CrossBeam to analyze their properties. The second option is 3D nanostructures` development. We succeeded in decomposition of organometallic molecules using focused electron beams as well as in making such metal-carbon whiskers as platinum-carbon and wolfram-carbon ones that serve as a base for framework nanostructures. We also develop nanomanipulation activities. Using specific nano-needles we move particles. Combining it with focused electron beams` power we can also create nanostructures, nano antennas and model parts of metamaterials and nanomechanical oscillators. Many research teams work on nanotechnologies but ITMO University scientists started dealing with this field before it became popular!

Would you please tell us about the unique inventions and pioneering research projects launched by your team.

One of groundbreaking inventions made by ITMO University researchers with the assistance of CrossBeam is a probe microscope module, which can be applied for electronic microscopy. We want to develop competitive product, which will combine the best properties of electronic and probe microscopy.

The second project that we develop is a nanomanipulation system managed by electron beam and needle. Using CrossBeam`s micromanipulation module we discovered an unexpected effect. Under the influence of electron beam the needle becomes electrically charged and then attracts objects using electrical field. Thus one can not only move them, but also put on the other part of the sample or on the other sample. Moreover, we have upgraded this technology, and now we can develop a needle by ourselves, then fix it on the manipulating system and operate using this nanometer probe. We apply this technology while developing nanoantennas and structured nanosystems.

Do you launch interdisciplinary research projects?

Some of my colleagues work on microfluidic systems. Headed by professor Anatoly Evstrapov, this research team contributes to the popular scientific track called “lab-on-a-chip.” This direction allows to carry out experiments on molecular structures and living cells using modern microtechnologies. For example, combining chemical and physical knowledge one can create micro channels within silicon materials to implement liquids inside them adding and mixing these micro streams. It is also possible to separate molecules using electrophoresis. Affected by electric field molecules move with various speed. Thanks to this one can detect and separate them. By developing these microfluidic systems we invent chromatographic structures or “traps” for molecules and cells.