Sergei Vlasov and Sergei Lyashko, graduates of ITMO’s Department of Advanced Mathematics, spent three years at the University of Iceland, where they studied magnetic nanosystems. The young scientists spoke to us about their research and the peculiarities of living in Iceland. 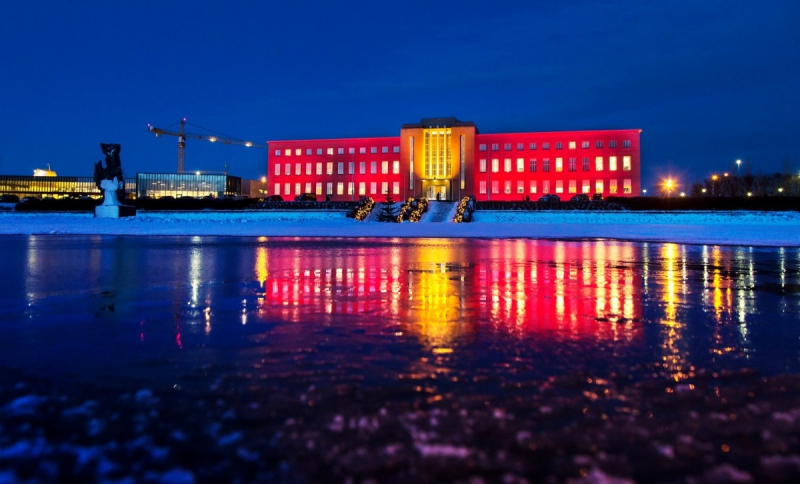 The University of Iceland is the country’s biggest; more than 13,000 of its students follow 300 programs in the fields of technical, humanitarian and social sciences. The university holds the 200-250 position in the Times Higher Education ranking, its highest indicators being Citation and International Outlook.

Sergei Vlasov and Sergei Lyashko are among the first PhD students to have the opportunity to conduct research in collaboration with scientists from Iceland as part of a joint PhD program. The students became part of a team led by professor Hannes Jónsson from the Department of Physics, and which focuses on the application of the transition state theory. The theory was developed in order to solve the fundamental problems of chemistry; yet its concepts and approaches can also be used to solve issues related to researching the stability of nanostructures’ magnetic states. During their time at ITMO University, Sergei Vlasov and Sergei Lyashko worked under the supervision of Valerii Uzdin, a professor at the Department of Advanced Mathematics and researcher at the International Laboratory “Mathematical Research Methods of Complex Physical Systems”; the laboratory has an established relationship with Hannes Jónsson’s team, which allowed the PhD students to work at the University of Iceland. The program was partially funded by the University of Iceland; still, to cover the rest of the cost, the students had to apply to a competition for participation in a joint PhD program. To do that, they had to send in their resumes and motivation letters to the host institution. Naturally, being part of Valerii Uzdin’s team was a great advantage; thanks to that, Sergei Vlasov has started to collaborate with Hannes Jónsson’s team on the second year of his PhD program, and Sergei Lyashko - on his third. The young scientists have carried out 30 to 40% of their work in Iceland, having done most of their research at ITMO University; their work focused on theoretical research for improving magnetic recording in conditions when recording devices are becoming increasingly smaller.

The demand for higher capacity makes developers try to decrease the size of all of the computer parts, magnetic storage systems included. Lesser magnets mean more blocks, and more data encoded. Yet, on nanoscale, different laws of physics come into play; for instance, the quantum effects emerge, and the systems also become more sensitive to external magnetic fields, temperatures and other external influences. It was these issues that ITMO’s PhD students and scientists from the University of Iceland collaborated on.

Sergei Lyashko focused his research on artificial spin ice - magnetic structures consisting of prolate nanoislands positioned in a particular order. Each of the nanoislands has its magnetization direction, and the condition of the overall structure is defined by the magnetization direction of each and every island. Extensive research of such systems has already led to the discovery of new physical phenomena, for example, magnetic monopoles, and can well contribute to increasing the efficiency of magnetic memory. Precise modeling and estimation of systems’ lifetime can be a great help in other important projects on creating magnetic storage devices, skyrmions, for instance. Skyrmions are magnetic chiral structures; it is believed that skyrmion-based storage devices will be both very resilient and have faster recording and read response times.

Another significant issue in creating nanoscale magnetic storage devices is the magnetic structures’ resilience to changes in temperature. Today’s systems work better at lower temperatures. This means that the probability of spontaneous change in magnetization direction tends towards zero, making improbable the unexpected translation of data and hence its loss. In other words, such systems have a higher lifetime.

Yet, as magnetic storage devices become smaller, quantum effects, including quantum tunneling, emerge in them. Such effects can cause spontaneous changes in a system’s state, and are very hard to predict. What is more, the presence of quantum effects in magnetic storage systems depends on external temperature. The temperature at which quantum tunneling becomes the dominating mechanism, and the system’s lifetime becomes finite, is called the crossover temperature. “We do not want spontaneous transitions to emerge in magnetic storage media. This is why I also studied the values of crossover temperature for such systems - the temperature at which quantum tunneling becomes a serious enough issue to affect the system’s stability. The other part of my work was dedicated to modeling such tunneling, or, if I am to use technical terms, searching for instanton trajectories at finite temperatures,” explains Sergei Vlasov.

On working and living in Iceland.

At the University of Iceland, ITMO’s students focused on theoretical aspects of physics, but they also had the opportunity to discuss issues with the university’s team that was involved in experimental research in the same field, which was most convenient.

“The research work is organized in accordance with the same standards they follow in other European universities or at ITMO. A PhD student is part of the laboratory’s staff, and it is their place of full-time employment. The working conditions in Iceland may well be more comfortable than anywhere else. I would surely like to return to work there someday, although I would first like to work somewhere with a kinder climate,” comments Sergei Lyashko. As for the Icelanders’ attitude, both PhD students note that most of the island-dwellers  are much more relaxed.

“They take it slow, and live for the moment. In Iceland, there’s no point in agreeing on something in advance; for instance, you’ve planned to go on a picnic, but then it starts raining, so you cancel everything, and stay home. Or, if it’s suddenly sunny, everyone will up and go for a walk. Another curious thing is that when it snows a lot, they take it upon themselves to shovel it away, instead of having the public utilities people do it, and usually do it throughout the day. So, you often find yourself leaping among snowdrifts. What I’m saying is that the Icelanders’ lifestyle is really different from the traditional European one,” explains Sergei Vlasov.

Nevertheless, Icelanders are a really close-knit and friendly people, even though seeing it may take some time. For example, they don’t greet each other if they’ve just met and they don’t plan on spending time together.

“I’ve read a book for those coming to Iceland, and there they explain it as follows. There are some 350,000 people on the island; two thirds of them live in the capital. Basically, almost everyone knows everyone, and if they were to greet each other, it would take like half a day’s time. Thus, they greet each other only when they haven’t met for several years, or if something really important has happened. Still, Icelanders are really welcoming and friendly, and they are always ready to help you,” shares Sergei Lyashko.

And as for the Icelanders’ sense of solidarity, the PhD student gives the following example. Recently, their select football team bested the English, qualifying to play in the World Championship. Sergei Vlasov was on the island at the time. “The qualification matches were livestreamed in the city’s central squares. They started at around 16-17 local time, and it as if everything had stopped working in Reykjavik; even at shops, only one checkout would work, at most. Everyone watched the games. And after their victory over England, people celebrated throughout the night, even though it was a workday,” remembers Sergei.

And, of course, the PhD students also got to see Iceland’s beautiful nature with its famous geysers, waterfalls, and glaciers.