Raymond Murphy, author of the world's best-selling grammar books English Grammar in Use came to ITMO University to present the new issue of his book and also share his experience with ITMO`s English language tutors. 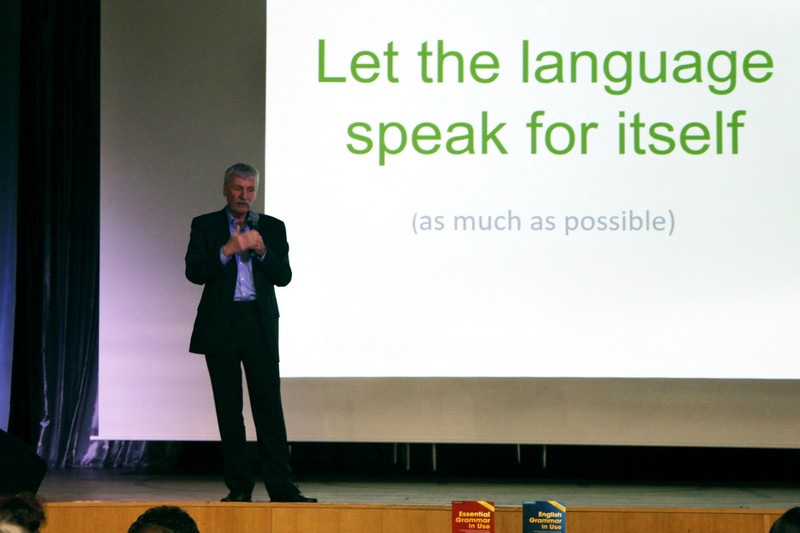 It is the thirtieth anniversary of English Grammar in Use this year. Written by Raymond Murphy this legendary book helped millions of people all over the world learn English. The well-known red and blue grammar series were reissued four times, the last one was presented in 2015. On this occasion, Cambridge University Press launched several presentation sessions in Russia for English language tutors. ITMO University supported this initiative and hosted the meeting, which took place in St. Petersburg on March 14.

“I had been teaching English for many years at private British and German schools. All my students were adults who came from different countries, that is why I had to use English only. Teaching adults is not the same as teaching children because grown-ups study languages more intensively. While writing my first books I focused on a real student, so I aimed at making the theory comprehensible without unnecessary information and technical terms,” said Mr. Murphy.

According to the approach developed by Raymond Murphy, the terms usually used in grammar theory are very complicated. For example, such words as “definite” “indefinite” are too long to define such short words as “a” and “the” articles. Moreover, students also should learn the rule of using zero article. It refers to all sections of English grammar studying where students cannot develop their intuition and creativity.

“One usually associates the word “grammar” with something negative, which prevents us from free communication by setting many strict rules. However grammar is a tool for getting new information and expressing one`s thoughts correctly. Don`t make students learn the rules, just give them apt examples that will help them remember grammar constructions. One can speak any language fluently without learning these rules by heart,” mentioned the expert.

As Daria Kozlova, Vice Rector for International Relations, noted, this and other interactive meetings prove that ITMO University is a non-classical university, which pays attention equally to top majors such as IT, Mechanics and Optics as well as to the promotion of modern teaching practices.

“I also studied English using Murphy`s books. I am very glad that Mr. Murphy found time to visit ITMO University. His advice was very important for us because we put great efforts to make the process of English language studying interesting and effective by developing speaking, academic writing and presentation skills of our students,” said Ms. Kozlova.