The project carried out by residents of ITMO’s business incubator has topped the Start1 program and started their own SIE, “Photonics Systems”. ITMO.NEWS spoke with the team leader about their experience with developing an industrial 3D laser printer, the opportunities that this grant gives, the value of accelerators and the unique new development that has no analogues in the Russian market so far. 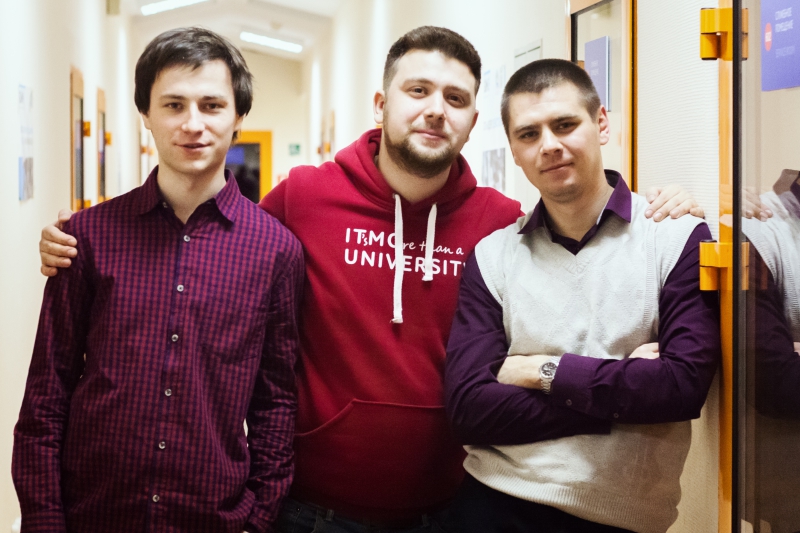 It seems, 3D printers have existed for a long time... How was “Photonics Systems”  which develops the 3D printer founded at ITMO?

Egor Gurvitz who is the project manager and a PhD student at ITMO’s Department of Nano-Photonics and Metamaterials comments: “Domestic 3D printers are accurate and inexpensive systems which would be nevertheless economically profitable were literally absent in the Russian market at the time we started our project. I remember, I needed to make an anisotropic metamaterial once and I could find only one place in our city where the desired configuration could be made. So I started planning a 3D printer project by studying materials and the market. However, we couldn’t form a team right away. And after research, interviews and negotiations we formed a multidisciplinary team which now has Dmitry Demin who is ITMO’s Information Technology Department alum and our programmer; Cyril Povorov, a design engineer who is currently a PhD student at the Department of Computer Photonics and Video Informatics here at ITMO and a microcontrollers programmer Andrei Laidus,  The Bonch-Bruevich SUT alum.

Anna Martynova and Ksenia Goryachaya, our trainees who are Master’s students at ITMO’s Department of Production Management and Technology Transfer, have greatly contributed to application development for the RSCI START program. I should mention ITMO’s startup accelerator Future Technologies and Andrey Myaskov personally who have made a big contribution to our project. Our team has been working on the 3D printer for a year already. There’s only one step from the dream to the actual idea of developing something - and everyone can do it. And sometimes after a step forward you should take two steps back. So, in order to not get discouraged someone has to take these steps and stride by your side. I believe that our project attracted great professionals and what’s most important we have build a very good team which is capable of setting new goals and not stopping at what has already been achieved.

The real era of 3D technologies is just beginning - and no one can predict how they will change our life in 10 years. Whether we will print new human organs, clothes or costume jewelry at our homes or a 3D printer will simply become part of the manufacturing process of every technological enterprise. And we all want to witness that moment and get a chance to ride the wave of 3D printing. Clothes printed on a 3D printer.

What are the unique features of the 3D printer you are working on?

There are many kinds of 3D printers, they are produced using different technologies and are designed for different purposes, on which their price category depends. We are also developing an industrial SLA laser (Eng. Stereolithography) printer. Our main competitors developing SLA printers are manufacturers from Europe and the USA. In Russia, there are several companies that also produce DLP printers. However, all of these are different technologies, albeit quite similar. Different 3D-printing technologies are intended for different markets.

Laser stereolithography implies layered photoinduced polymerization of photopolymer resins with their solidification by the action of laser radiation. Many other technologies work with photopolymer resins (or plastics). However, the correlation between price and quality of printing is a topical issue. Printers costing from 30 to 200 thousand rubles are widely represented in the market. They produce items quickly enough, but the quality of the product is not always agreeable to the requirements of the customer. There are very expensive American printers as well which cost tens of millions of rubles. They print 3D objects with high surface quality and quite fast. However, the total cost of the product becomes very high. In addition to that, the price of original printing materials can increase several times before they even reach Russia. Our printer is an alternative to both because it falls into the middle price category and solves the problem of manufacturing inexpensive high quality products, as the 3D printer supplies will be produced in Russia. One can print any objects measuring 30 x 20 x 30 centimeters on our printer.

What are the main challenges your team is facing now?

Our main challenge is that most high-tech projects lack financing in the early stages of development. There is also shortage of human resources for such projects. All the procedures we had to do were quite expensive. Thankfully, now we have the grant and a year to complete the project work. And last, but not least, we have a fully staffed multidisciplinary team.

While being the President of ITMO’s Optical Student Chapter, I repeatedly mentioned that people determine everything. Every member of the team, either a PhD student or a recent graduate, is working in a high tech sphere, so it’s a challenge to balance everything.

Another problem was the search for contacts and connections with different factories and enterprises that would produce parts and modules for us. So, that’s great that ITMO has Educational Research Center “Russar”. Students and post-graduates can produce almost any details within the university.

Design solution of the product, its "packaging" is crucial also. In six months we will have a functional version of the prototype; and we want industrial designers from FORMA to do our printer’s design. Their solutions are both practical and elegant. I met with them at one of the seminars, which Andrei Meyaskov invited me to.

Now that your have RSCI grant, what tasks will you prioritize? I should mention it was a long journey and quite a lot is done already. So we are not starting from scratch. The first version of our 3D printer was developed in September. Now we have to sort everything out and rework it. We announced a full-fledged research and development plan and came up with a timeline according to our project plan. So, for the first three months we will do the measurements, test the modules and optical, mechanical, electronic parts of the device. I wouldn’t announce the full list of things we need to do here, but I would say that there is some tedious work to be done.

Do you have any partnerships in mind?

There are several offers from big investors, but everyone needs a final prototype. This is what we are doing currently. We are very interested in reaching out to large factories that are engaged in investing in new technologies, those who would like to update their manufacturing process. It is clear that one can not replace an actual worker, say a machinist for example. However, if you want to create a new model, it's easier to make it on your computer and have it produced on the same day. People often think that 3D printers are a kind of robot that will replace actual factory workers. It's not like that at all. 3D printers are not designed to produce tens of thousands of products, not even hundreds. If we are talking about such amounts, it is either something medium or small in size. Let's say the printer would work for eight hours a night and produce two parts. A turner could produce 10 parts at that shift, for example. However, if it’s production would be too complicated, he could produce none as well. So, human element is involved here. However, a 3D printer does not have that factor, it can easily manufacture a cylinder or an Eiffel Tower of the same size. For the turner, both the dimensions and the number of technological actions that he should perform to produce one workpiece are important. However, if you want to make a complex high-quality master model and the mechanical characteristics of the plastic are suitable for this purpose, a 3D printer will perfectly cope with this task. So, when the printer is ready, will you apply for techno-brokerage services? How do you see this process: who could be the middle-man between your development and representatives of the industries?

We plan to turn to ITMO’s Business Incubator for help. It has a connection with the Technobroker School. Now that we already have two millions invested in our project and our product is hot and happening, we hope there will be more investors and later on customers for whom all that is happening around our project now is a sign of quality.

How much more time do you need to finalize your project?

We have declared 1 year for our project timeline, but, perhaps, it will all happen a bit faster. It all depends on how successful completion of each stage would be. There are some specific fields where we can work. The biomedical industry could invest in the project right now because we already have an initial version of the device. So, one can be certain of how this device works. Getting investments from companies at other markets is much more difficult because they need the final product. The cost of our 3D printer’s final version is now estimated at one million rubles. If we compare the existing German equivalent to ours, it will lose, as it costs five million rubles and is inferior in performance. You have analyzed the market. Are 3D printers used in different Russian industries en masse already?

This is by no means a widespread phenomenon yet because Russian factories are quite conservative. Although, some industries are more open to the experiment. Designers or big firms can be more interested in such a proposal. Truth be told, if a plant starts purchasing any devices, it would need to buy a whole series of printers and understand clearly what to do with them. Our ultimate goal is to sell, but it's important for us to whom, how and why we will sell our product. What I mean by that is, if our printers can work in the biological and medical industries and they would stand still at a furniture factory, I personally would be very upset. Our team has developed a certain ideology. We have been working on our 3D printer for a long time, so its further destiny is important for us now.