Guy Eames is chairman of the Russian Green Building Council (RUGBC), director of Planet 2030, and a master of climate change and sustainable development. For the past ten of his 30 years of working in Russia, he’s been striving to spread the green building cause, and his efforts have yielded results. In an open lecture at ITMO University’s Institute of Design & Urban Studies, the expert talked about how the international green building standards LEED and BREEAM are being implemented in Russia, what local objects tick the green building box, and how the eco-construction field has changed in the past ten years. 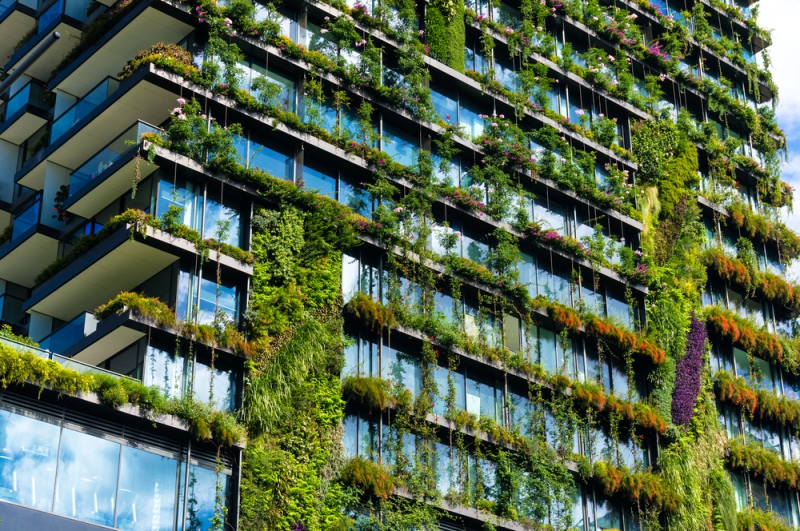 An example of green building in Sydney, Australia. Credit: shutterstock.com

Sustainable development and eco-construction are interconnected. Green standards are needed for constructing buildings that are more eco-friendly. While ten years ago eco-construction in Russia was something that was laughed about, now there is a multi-professional community strongly driven by the green building cause.

Also known as green building, eco-construction is a form of construction and utilization of buildings that have a minimal impact on the environment. In today’s Western Europe, the construction industry accounts for 40% of landfill waste. Faced with the unsolved transport question, continuous exhaustion of non-renewable resources, population growth (especially significant in developing countries), and overconsumption of energy, people started thinking about making their lifestyles more eco-friendly.

The 1970’s oil crisis gave a major impetus to that change. (The Soviet Union wasn’t part of it as the country didn’t have a market economy.) It is this day of reckoning that pushed people onto the path of sustainable development, as they began to ponder the solution for the transportation problem and opened their eyes to the importance of recycling, rational consumption of water and others. But despite this, we still live in the world where there is a serious imbalance in social, ecological and economic capital and resources are squandered left right and center.

When the Russian Green Building Council was just starting out, it was decided that green building would be referred to as eco-construction because this first notion had somewhat of a baggage. Green building existed in the USSR, but more in the form of landscaping solutions. The experts also determined the three criteria of eco-construction.

The second is ecologically safe construction. This criterion incorporates everything related to the ecology of a house, thus being a very complex notion that includes not only interior space (good-quality ventilation, comfortable humidity and temperature levels), but also the materials that the house was built from (as each material implies a certain ecological footprint) and the impact its construction had on the chosen territory (as the harm made to the ecosystem of the place can be calculated).

The third criterion is maximal comfort for residents. Each building should perform the functions it was assigned; for example, hospitals should have appropriate acoustics, air conditioning and other parameters crucial for maintaining human health.

In the 1980s, the Western world concerned itself with the much-needed development of eco-construction standards. Specialists in the field took on the challenge to create a standard that would regulate a comprehensive range of aspects, from facility management to the building process and transport availability. BREEAM, or the BRE Environmental Assessment Method, was the first standard to step into these shoes. Developed by the Building Research Establishment, a building science research center from the UK, in 1990, this international green standard for the evaluation of the sustainability of buildings is the oldest such standard out there. Now it is widely used for ecological assessment of real estate in a host of countries, Russia being one of them.

A couple of years after BREEAM saw the light of the day, another standard emerged, this time an American one. Developed by the non-profit U.S. Green Building Council, LEED, or Leadership in Energy and Environmental Design, has a lot in common with its counterpart from across the pond, drawing on BREEAM as its foundation.

The British standard gained a better traction in Russia. So much so that two years ago, it was adapted to suit local specifics, with the Moscow State University of Civil Engineering and Russian Green Building Council in charge of its russification and maintenance. This building assessment system applies to all types of buildings frequented by people, from offices, prisons and hospitals to stadiums and supermarkets. Simply put, BREEAM is a methodology as per which a building is assessed in ten areas covering different aspects of health and safety, environmental impact and comfortability.

The first such category is management. How to manage a building to make it more eco-friendly? This criterion evaluates what kind of inspections are carried out by a developer, whether they give consideration to the objects present on the site prior to the start of construction, and how much they try to save as much of these as possible. The management category also considers how buildings are demolished, important objects are kept, and other factors contributing to the sustainability of a building.

The second category is health & wellbeing. This provides for basic comfort requirements such as how well the air circulates in a building, whether it has windows, and what the temperature is like.

The third category is energy. Here it’s important to understand whether a building underwent any enhancement of its energy systems leading to more sustainable use of energy and the reduction of carbon emissions.

The fourth is transport. It’s crucial that a building be readily accessible via sustainable means of transport, with public transport and alternative transport solutions being the best, and cars the worst, options on the list.

The fifth is water, namely control of consumption of potable water and water used for housekeeping needs. The rational consumption thread continues with the sixth category, materials. This one weighs up where construction materials are sourced from, as even if a building is constructed from eco-friendly materials, them being not locally and responsibly sourced nullifies the whole eco-construction effort.

The seventh category is waste, favoring the sustainable management and recycling of construction, operational and all other types of waste occurring within the construction and maintaining of a building.

The eighth is land use and ecology. This category puts a premium on sustainable land use and the protection of ecosystems present on a site before it was claimed for construction. The last two categories are pollution and innovation.

The points achieved are then multiplied by weightings that reflect the topicality of design solutions for that particular region. If the total amounts to 30-44 points and higher, the building is awarded a BREEAM certification.

“When the preparation for the 2014 Olympics just began, it was announced that Russia would start to construct green buildings. At that point, the country couldn’t boast a single building certified by an international green standard. It was then that we created the Council, also organizing a series of seminars on biking infrastructure, landscaping and sustainable water consumption. There was also talk about creating a new Russian standard, but that went on to become more of an additional ecological requirement. As the Olympic Park was being constructed, specialists were being trained, and ten buildings were put forward to be internationally certified. In the end, only six of these objects passed the certification process, with another two passing by 50%.

“And now to the present, with 300 building in Russia certified for the past ten years, by international and national standards alike. Most of these projects are located in Moscow in St. Petersburg, but these pop up in regions too,” notes Guy Eames.

Becomes more and more realistic. While ten years ago it was a concern of eco-fanatics with money and government connections in the rarest of cases, now it is a voluntary and popular initiative with a strong economic argument.

Moscow government is the biggest green building enthusiast, but interest in international eco-construction standards grows among other cities’ authorities too.

The projects are relatively few and far between. Nowadays only 300 buildings in Russia have an international certification, but we’re talking different types of buildings: hotels, apartment blocks, offices, supermarkets, warehouses and others.

Russia has enormous potential. The country gave rise to many eco-friendly construction materials that can be used locally or exported worldwide.

Russian Green Building Council (RUGBC) unites over 250 Russian and international companies that are leaders in the architectural, construction and planning fields, with all of its activities aimed at the development and promotion of eco-construction and implementation of international green building certifications.

The open lecture was organized by the Laboratory of Sustainable Urban Development, whose head, associate professor at the Institute of Design & Urban Studies Irina Shmeleva, is a long-standing project partner of the speaker. The collaboration between the Institute of Design and Urban Studies, Guy Eames and BRE will continue with an online research project on the green building standard BREEAM, as part of which ten Russian universities, ITMO included, received the opportunity to offer 20 of their Master’s students interested in sustainable development and green building the chance to participate in a Russian-language online course to be awarded a BRE Academy certificate enabling them to use the acquired knowledge in their future professional activities and later boost this qualification to become an international green building auditor. The project is supported by the British Embassy in Moscow.