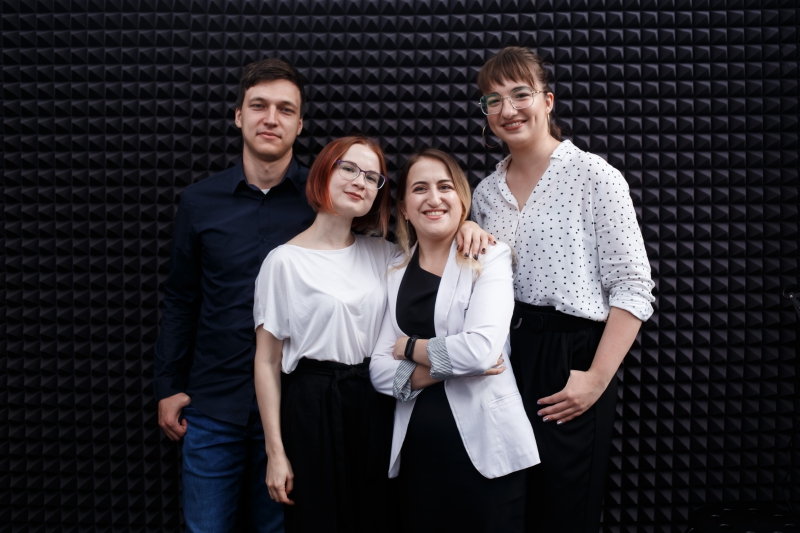 The podcast studio “Two Tracks” is situated in the very heart of St. Petersburg, on Petrogradsky Island. According to Alexander Golovin, the two students came up with the idea of such a studio some six months ago.

“It often happened that when we needed to record a podcast, we really had nowhere to go. We had to sit in an anti-cafe or drop in on people who had a very basic understanding of what podcasts are and what we were doing, hoping that their neighbors wouldn’t start drilling into walls or talking loudly. We simply didn’t have any other options. People also asked me about where they could record their podcast and asked to use my equipment. So I decided to create such a place myself,” shares Alexander Golovin.

This is how Alexander and his colleague Irina Asadullina decided to team up with their partners Anna Petrova and Anna Pritchina from the event agency Ann&Ann’s and launch a podcast studio together.

Podcast with a cup of coffee

Though the studio was officially launched in early September, several podcasts have already been recorded there, including three episodes of CritMouse, as well as a couple of commercial records.

“The purpose of our project is to create a platform where people could come, invite their guests and talk in a nice place with a friendly atmosphere and a cup of coffee. Where they don’t have to explain to anyone what podcasts are,” says Alexander Golovin.

Apart from that, the founders of the studio also want it to become some sort of a public space for everyone interested in podcasts where people can listen to lectures and share experiences.

“Starting this Friday, we launch a series of lectures and workshops for a wide audience,” says Anna Petrova. “The first lecture will be held on September 13 and will be dedicated to offline events.”

Alexander notes that at their studio, they are ready to help anyone plan, build and launch their podcast from scratch.

“You can get in touch with us if you have an idea but don’t know how to bring it to life. We will literally take your hand and lead you through the whole process: help you deal with the technical aspects of making a podcast, organize a recording, help you find guests and ideas, and work out a development strategy. The most important thing is to have a good idea. Because you can record your podcast in the best studio in the world with fancy mics and everything, but if you have nothing to say it’s useless. Therefore, you first need an idea, a story that you want to tell, and then you can start thinking about its implementation,” explains Golovin.

“I’ve been working on this project for over a year now and I’m not starving. Isn’t it enough proof that you can make money with podcasts?” asks Alexander. “This is my only job right now. It’s not huge money, but it’s something.”

The founders of the studio say that according to data provided by Yandex.Music, the audience’s interest in podcasts has grown significantly over the past year: since the beginning of summer, the number of people listening to podcasts has increased by 60%.

“The thing is that people’s consumption habits are changing, and the way we consume media content is changing as well. People now prefer to do several things simultaneously. For example, you can cook and watch a YouTube channel about cooking, or run and listen to an educational podcast about running. Many people now listen to podcasts while driving. Podcasts are very convenient, and that’s why they’re gaining momentum,” says the student.

However, notes Alexander, the quality of many podcasts leaves much to be desired. Poor sound quality and poor diction make such podcasts difficult to listen to.

“I would really like to see more good-quality podcasts. For example, in Russia, there are very few narrative podcasts where people tell a story; sometimes listening to such a podcast can be more interesting than watching a movie. And if my studio will help people make their podcasts better, I will be happy,” says Alexander Golovin.