ITMO University programming team became World Champions at the ACM International Collegiate Programming Contest World Finals that took place in Rapid City (USA) on May 24, 2017, setting a new record in the history of the contest. No other university had been able to win it seven times.  Vladimir Smykalov, Ivan Belonogov and Ilya Zban – all students of the ITMO University Computer Technologies Chair – successfully and quickly solved 10 out of 12 problems and beat some 133 teams from around the world. The contest took place for the 41st time. 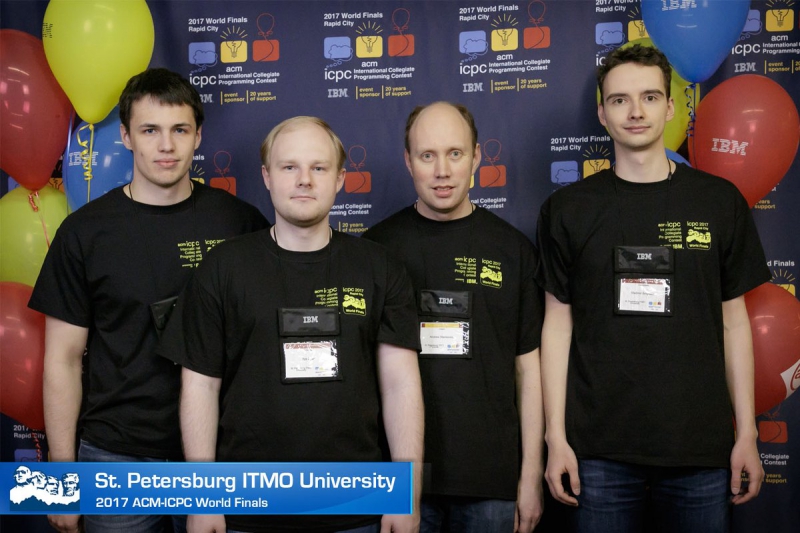 ITMO U team, just like its successful predecessors, was coached by Andrey Stankevich, PhD, associate professor at the Computer Technologies Chair. In 2016 he received the ACM ICPC Senior Coach Award as his teams have been in the contest’s finals every year for the past 15 years.

Russia was represented by 13 teams, including three teams from Moscow and St. Petersburg each. Russian teams have been participating in the contest since 1993, and won it 12 times since 2000.

Traditionally the contest takes over five hours. Each team, consisting of three people, can only use one computer, which means that they have to divide the roles. Some tasks test attentiveness and concentration while others require in-depth algorithm knowledge. Speed, accuracy, number of tries and the quality of the final product all go into the evaluation as in real life, they would also be important factors.

Over 300,000 programmers participate in the qualifying rounds in regional contests. Winners of the Finals receive the World Cup and a monetary prize of $15,000.

The ACM International Collegiate Programming Contest (ICPC) is a multi-tier, team-based, programming competition operating under the auspices of ACM and headquartered at Baylor University. The contest involves a global network of universities hosting regional competitions that advance teams to the ACM-ICPC World Finals. Participation has grown to several tens of thousands of the finest students and faculty in computing disciplines from more than 2 thousand universities from over 91 countries on six continents. The contest fosters creativity, teamwork, and innovation in building new software programs, and enables students to test their ability to perform under pressure. It’s the oldest, largest, and most prestigious programming contest in the world.