For five weeks more than 800 players from all over the country solved entertaining physics problems of varying levels of difficulty and competed for the contest’s main prizes – branded merchandise from the university, tours of its labs and a chance to gain a 10-point bonus to their Unified State Exam results when applying to ITMO University. 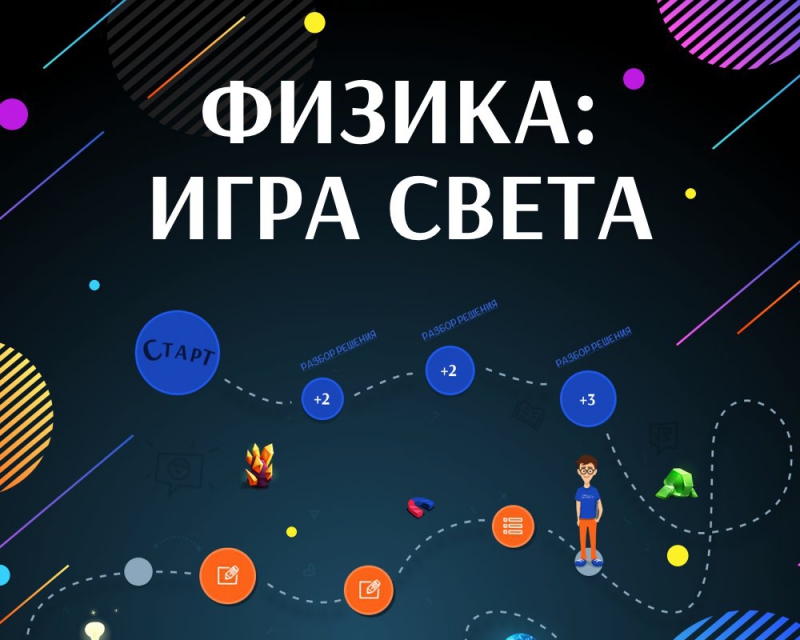 Highschoolers from all over the country took part in the first online game “Physics: Game of Light” organized by ITMO University and the educational portal Newtonew. Participants hailed from St. Petersburg, Leningrad Oblast and Moscow (players from these regions constituted 40% of the playerbase) as well as other major cities such as Ekaterinburg, Volgograd, Chelyabinsk, Ufa, Perm and Nizhny Novgorod and other, smaller, localities.

The highschoolers didn’t need to be onsite to test their knowledge of physics. The main feature of “Game of Light” is that it’s completely on-line. To take part in the contest all the players needed to do was to authorize themselves on the game’s website through their VK account, fill out their personal information and get to solving the tasks.

The game started on April 17 and came to an end on May 21 and consisted of five stages that corresponded to the five weeks during which the players had to solve tasks of varying difficulty. The easiest tasks could be solved by an average tenth-grader; some were a bit tougher and required both knowledge of basic physical laws and some creative thinking. The third difficulty level – the highest one – was much closer to the classic format of school Olympiad tasks.

The players could solve their tasks at any time. The main condition was that the answers needed to be submitted before the next stage began. At the end of each week the correct solutions were published on the game’s website and the players’ rankings were updated according to that week’s results.

Technically, anyone was free to take part in the contest, but, first and foremost, the game was intended for talented and motivated highschoolers of 10th and 11th grade who are enthusiastic about physics and interested in a career in this field.

All one needed to do to become a winner or a runner-up was to successfully complete every stage and enter the top of the leaderboard. If a player also wanted to compete for the Unified State Exam points, they had to not just win, but to provide proof that they completed the tasks on their own. To do that, players would record themselves solving the problems and then, after each stage was complete, post the videos on their YouTube channels that they linked to in their accounts on the game’s website.

In total, more than 800 highschoolers from all over Russia participated in the online-game; 145 of them recorded themselves on video to compete for the 10 bonus points. After reviewing the results, the jury determined a list of 35 winners who solved the problems with most precision and verified their results.

Ten winners received 10 USE points for when they choose to apply to ITMO University, as well as signature t-shirts, notebooks, tickets to ITMO’s Museum of Optics and an invitation to a tour of ITMO’s physical laboratories. 10 runners-up were awarded 5 bonus points and 15 received 3 points.

The other 63 players who demonstrated great results but chose not to apply for the bonus points were invited by the university to visit the Museum of Optics and the physical laboratories. In addition, the organizers reminded all those who are still undecided about their future education that they can take a free vocational guidance test and told them about the advantages and features of studying at ITMO University.

As noted by one of the organizers, founder of educational portal Newtonew Evgeniy Smirnov, the first-ever online-game “Physics: Game of Light” has proven itself to be very effective.

“I believe that together with ITMO University we’ve managed to implement everything we’ve planned, and in a short span of time. This online-game is a unique project that, besides the obvious opportunity to increase one’s chances at enrollment at ITMO, also solves an educational problem: making schoolchildren interested in basic sciences, particularly in physics, without which the modern society couldn’t exist. Without a doubt the implementation of such projects improves ITMO University’s public image and motivates and involves its future applicants, who show great results at school and want to develop their skills even further,” comments Evgeniy Smirnov.