Students and Their Mentors Awarded St. Tatiana Badges of Honor in St. Petersburg

On January 25, the Students Day in Russia also known as Tatiana Day after its patron saint, active representatives of St. Petersburg universities and citizens were awarded St. Tatiana badges of honor marking the significance of their contribution to the education and society in St. Petersburg. Among the awardees were students and staff of ITMO University. 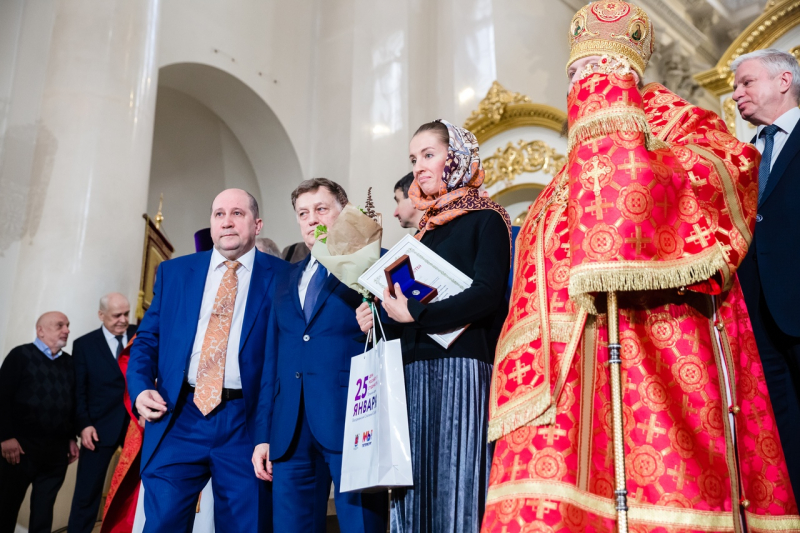 “I would like to remember our mentors. I believe that today, the concern of the older generation consists in bringing up a morally and physically healthy new generation, for us to channel the collective memory revered by us, our parents and our grandparents. Of course, we often express our view that the young generation is losing moral ideals, that their attitude to the matters of state is not serious enough, but it is my conviction that it is we, the adults, that have to explain to the youngsters what is the most important in life, what can be condoned and what can’t. So I congratulate every single one of you, students and mentors, with this formidable holiday.”

The awards to the students and were handed out by the representatives of the Council of Rectors. Elena Filippova, director of ITMO University’s Center for Creative and Corporate Projects, received an honorary badge and the title of a Mentor of the Youth.

“I have been working at ITMO University since 2006, overseeing extracurricular activities and organization of events. It was us who initiated the tradition of dressing all graduates into graduation robes, like they do at Western universities, and also host the graduation ceremony at the Peter and Paul Fortress. My colleagues and I try to create such an environment at the university in which students would be able to apply their creative abilities and show their potential in different fields. Apart from this, we also coordinate student clubs. It’s pleasant to have been awarded, but the most important award for me is that I’m doing what I love, and the understanding that my work makes people happy,” shared Elena Filippova.

“I’ve been a volunteer since 2016; in this time, we’ve organized a great number of charity events at ITMO University. Now I’m heading the “People Need You” club and coordinating the work of volunteers. Getting this honorary badge felt very nice. This is my first award of that kind of level. And it’s been no less important that my colleagues, mentors and volunteers together with whom we’re making a difference all came to congratulate me,” said Viktoria Vasilyeva.