It’s no coincidence that we celebrate Internet Day on April 4. Error 404, “Page Not Found”, has become a cultural staple; music bands and social projects are named after it, while actual 404 pages become places where web designers express their creativity. ITMO University celebrated the Internet Day in an Art&Science fashion, inviting St. Petersburg’s street artists to show off their skills. Visitors could also try their hand at making street art alongside the pros. 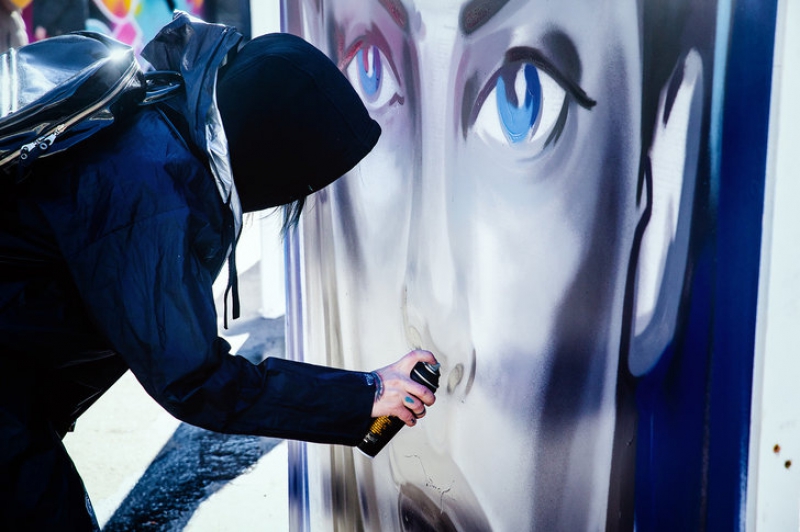 Nine experienced artists - Nikolay Super, Sergey Snow, Roof Avc, Lu_blue, Kenodzilla, Sergey Folmer, Roman Burdanov, Andrei Rebel and Egor Gerasimov - created five works for ITMO University’s festival of street art and graffiti. Egor Gerasimov also held a graffiti workshop for those interested in creating their own street art. As the date 4.04 was chosen for its similarity to Error 404, the artists touched on the topics of the internet and lack of access to it in their works.

As one approaches the gallery, the first work they see is one by the well-known St. Petersburg artist Lyuba Tyulkina, known online as Lu_blue (Lyuba also creates music under the name DITA REDRUM), whose works can be seen on many of the city’s streets. In her drawing she depicted a young woman who, as the artist explains, is the soul of the internet.

“My works are almost exclusively all portraits; most of the time, they are female, as I prefer to work with female beauty,” – she says.

Lyuba isn’t the only artist to have picked a female representation for the online world. Sergey Snow and Nikolay Super worked together on a painting of a frightened girl who’d lost her internet connection.

“The female image is integral and constant to my work, and I usually do portraits. Today I decided to depict this girl in acid colors that represent fear and loss of sanity – a feeling many experience when they lose their internet connection. As for me, I don’t consider the internet a huge part of my life; I prefer the offline world where I get to draw,” – says Sergey Snow.

Artists from the graffiti group “Do Good” Evgeniy Gager, Andrei Rebel and Roman Burdanov created a graffiti rendition of the all-too-familiar phrase FATAL ERROR, as well as touched on the topic of virtual reality.

“We drew this half-human, half-robot wearing a VR headset – a “far out dude” as we’d call him. We came up with the idea in advance once we learned the theme of this festival. We have a specific style to all out paintings: we always put in these quirky characters and use our signature fonts,” – explains Andrei Rebel.

The artist Kenodzilla drew a flaming Instagram symbol, subtitled with the slogan “Likers Gonna Like” as a play on the usual “haters gonna hate”, while street artist Roof Avc dedicated his entire canvas to a gigantic number 404.

Guests could also enjoy a racing arcade machine, courtesy of Red Bull, and awaken their inner dance star by playing a round of Just Dance. ITMO University also gave gifts and souvenirs to those who shared pictures with the hashtag #ИТМО404.

The artworks will remain in the courtyard of ITMO’s building at Lomonosova 9 until the end of April.