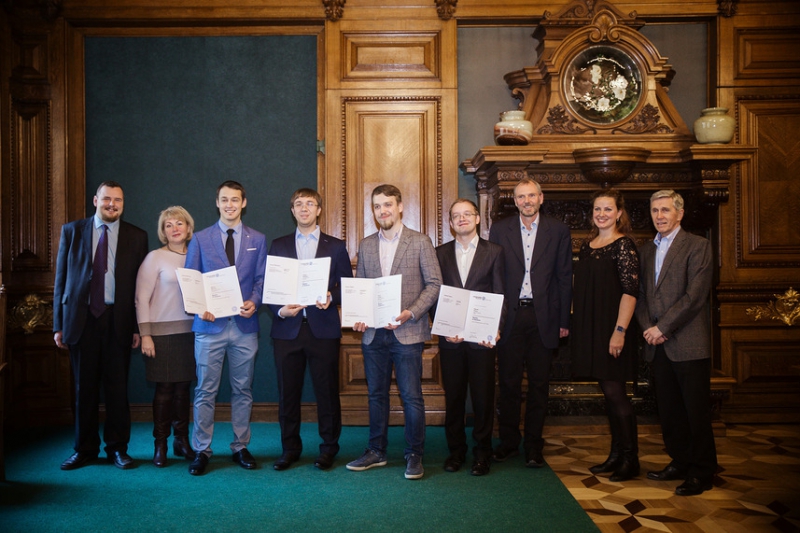 Four students from ITMO’s Information Systems Department spent one semester of their Master’s program “Business Information Systems” at the University of Rostock (Germany). There, they’ve studied such subjects as corporate modelling, data storage and business analytics technologies, integrated e-commerce, research methods in business information systems, models of services and business processes, and others. Mikhail Petrov, Mikhail Mironov, Pavel Grafkin and Sergey Mikhailov have become the first graduates of this program that was launched in 2015. Graduates of the double-degree program with their diplomas

“The biggest difference about education in Germany is that the classes are less strict, meaning that nobody really tracks your attendance; however, there are many practical classes based on actual cases used in today’s business processes. There is also a big difference in how exams are held. In Germany, they don’t have you talk about a specific topic or answer a question – you just have to maintain a conversation with the professor for 20 minutes or so concerning the subject of your course. What really stands out for me are the case studies we were given during our classes. Usually, we’d be presented with a model of some business process and a technical task with the basic outline; we’d have to find solutions to the tasks and tools to improve the quality of the given business process in order to increase profits,” – explains graduate Mikhail Mironov.

The graduates say that having received their double degrees, they are now able to find work both in Russia and abroad. In addition to their studies, they also spent time working at the Fraunhofer Research Institute, where, instead of regular classes, students work on actual cases and their solutions are integrated into existing business processes. As Mikhail Mironov explains, the students were lucky enough to work there for the entire duration of their stay in Germany. They’ve also established connections with their German colleagues with whom they might later reunite for collaboration. “I have been a supporter of this partnership ever since this idea first emerged three or four years ago. One of the best results of this program is the relationship that has been established between the parties. Our regions have long been partners, even on a political level; “Russian days” are often held in Rostock. Students from both universities find that many companies and organizations are interested in staff with such experience. I think that Russian students are very well-trained. Of course, we have different focuses. Russian students tend to have a better understanding of mathematical and theoretical approaches, while German students have more practical knowledge in computer science. But, overall, the level of expertise is approximately the same. Russian students today can find work at German companies involved in international development. I believe that they have a real potential in the power or automotive industries,” – says Prof. Kurt Sandkuhl.

According to another graduate, Mikhail Petrov, the way that subjects are taught in Germany is most effective. As an example, he brought up the classes at which he had learned about the Petri net and mathematical literary analysis used for efficient reviewing of articles. “Everybody knows that science in Russia began with Peter the Great. The room we stand in is maybe 300 meters away from the first building of the Russian Academy of Sciences he had built. Back then, there were no scientists in Russia, and many experts were invited from Germany. Centuries later, we come back here, to this symbolic place, and once again extend a friendly hand to each other. I hope that we will continue to develop this project, as no country can tackle today’s global challenges on its own,” – said Vladimir Parfenov, head of ITMO’s Information Technologies and Programming Faculty.

University of Rostock and ITMO University have received a student mobility grant from the German Academic Exchange Service (DAAD) for the program’s next two years. It is expected that the German side will continue to apply for the grant in the future; next time, they will be able to apply for a four-year grant.

As Ekaterina Tulugurova noted, one remarkable thing about this program is that when it was first created, it only took six months to prepare and finalize all paperwork. Usually, it takes one or two years to fully coordinate such collaborations with German universities.

“I believe that such efficiency was due to how enthusiastic the University of Rostock was about creating this joint program. Before it began, they consulted with the students there to find out what they thought of an academic exchange with a university in St. Petersburg. They say that the students expressed great interest in this initiative,” – she says.