How can modern digital technologies help theater-goers “see” actors’ feelings? Can actors convey their emotions without words? Neural interfaces and biosensors make it all possible. The participants of the Experimental Interactive Design Summer School studied how modern technologies can be used in theater. The school was organized by Tallinn University, ITMO University’s Creative Lighting Department, and the New Stage of Alexandrinsky Theater. 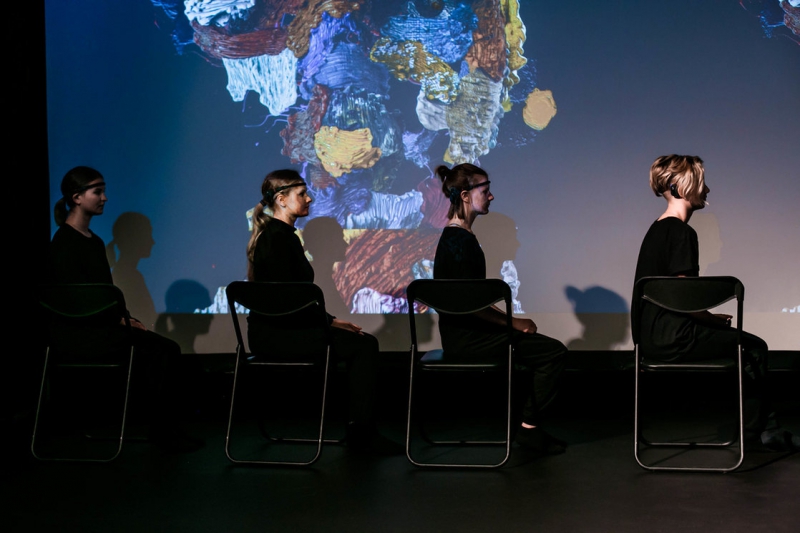 The international summer school was coordinated by Tallinn University teachers as part of the Estonia 100 anniversary program. ITMO’s Creative Lighting Department and New Media Lab of the New Stage of Alexandrinsky Theater provided platforms for lectures and workshops, and also promoted the event on the Internet. Among the participants were experienced designers, media artists, media engineers, and IT specialists.

Over the course of a week, they learned about interactive design tools and their applications in neurotheater. This is a new kind of art that uses neural interfaces and biosensors to track the brain activity, which can be represented by images or sounds. That’s how these tools allow viewers to “see” actors’ thoughts, feelings, and emotions.

The participants of the summer school had the opportunity to learn from the experts in the field, explore the existing neurotechnologies and think about the ways to further improve them. All students worked on their own projects using modern software such as Max MSP, Isadora, Python, Arduino, as well as various devices and sensors. They were assisted by experts in the fields of physiology, interactive design, physiological calculations, and computer systems design. When the course came to an end, the participants presented their projects at the New Stage of Alexandrinsky Theater.

In total, four projects were presented to the audience. The first project focused on how people affect each other’s emotional state, even without using words. To convey this idea, two actors equipped with neural interfaces which tracked their brain activity watched two videos: one evoking positive feelings, and another one negative. The audience could see the actors’ emotions on the big screen displayed in the form of geometric shapes: the actor who watched positive videos produced soft, even lines, while the actor who watched negative videos had sharper lines appearing on the screen. Then the first actor tried to cheer up the second one, which resulted in their lines becoming soft and even, too.

The authors of the second performance attempted to answer the question of why dance as an art form has been so popular throughout the history of humankind. What feelings and emotions does it evoke? A professional dancer performed several dances, but his movements did not always correspond with the music: for example, the music was cheerful while the actor moved in a restless and unsettling way. While the viewers were watching the performance, their brain activity was being displayed on the screen in the form of multi-colored spots. The authors of the projects explained that the dancer had managed to affect the viewers’ mood, as even though the music was cheerful, they felt uneasy, which was indicated by their brain activity.

The third performance attempted to show the future in which people choose partners not based on their interests, but on their emotional states. Four actors tried to sync their thoughts aroused by certain images and music. The fourth project allowed viewers to become actors themselves: one participant performed different tasks, while another observed. Their cerebral responses were then analyzed by a computer which divided them in four groups depending on their type. When participants felt a particular emotion, the computer matched it with corresponding words and displayed them on the big screen, as if the participants were writing poetry with their emotions.

Participants of the summer school included ITMO University students Daria Chirimisina, a first-year PhD student and graduate of the Lighting Design Master’s program, and Ekaterina Svyatlovich, a second-year Master’s student. The Creative Lighting Department students plan on conducting research on the impact the light and modern media technologies’ have on human health, so the knowledge and skills they’ve acquired at the summer school will come in handy in their future work.

“The majority of the research in the field of lighting design explores how light affects human health and wellbeing, and neural interfaces serve as objective tools for gauging people’s psychoemotional state. That’s why they’re actively integrated in the cutting-edge research and progressive lighting design Master’s programs of world-class universities such as Aalborg University and KTH Royal Institute of Technology. Our department, too, sees the need of implementing these tools in our research. This international summer school gave us the invaluable opportunity to learn from our Russian and international colleagues’ experience, which will help us in our future joint research projects,” commented the Creative Lighting Department tutor Ekaterina Timchenko.

In addition to collaborating on the summer school, this year the Creative Lighting Department and Tallinn University have won a joint Erasmus+ academic mobility grant. The CLD has also won an Erasmus Partnership grant for their research on the effects of light on human health. Six universities applied for the grant: Aalborg University (Denmark), KTH Royal Institute of Technology (Sweden), Wismar University of Applied Sciences (Germany), ITMO University, University of Wolverhampton (the UK), and Thomas Jefferson University (the USA). The international research group now focuses on new approaches to studying how light affects human health.