The two-day Hack the Sea hackathon has recently been held at ITMO University. This is the first hackathon organized by ITMO together with the Finnish company Wärtsilä Digital Technologies, which manufactures navigation equipment for large watercraft. Over 20 students, most of them representing ITMO’s Information Technologies and Programming Faculty, had to develop an app for facilitating the navigation around the Finnish company’s headquarters. More on the hackathon’s results in this article. 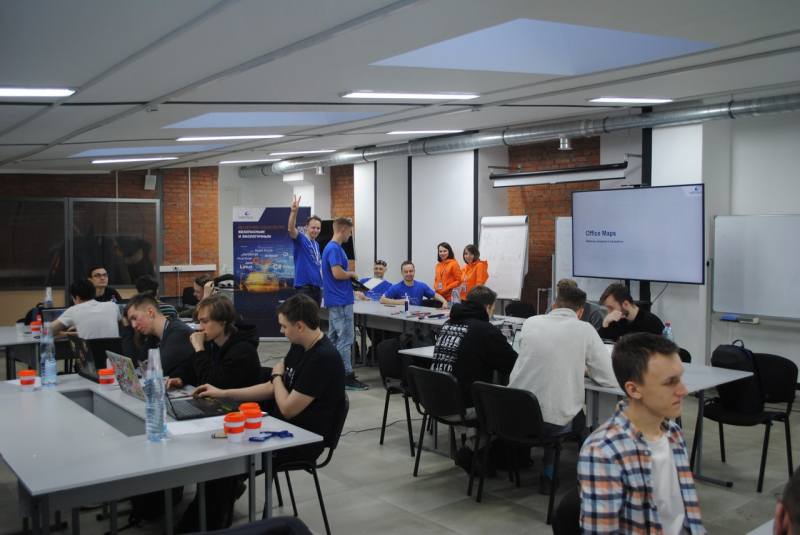 Hack the Sea by ITMO and Wärtsilä. Photo c/o the organizers

The cooperation between ITMO University with the company Wärtsilä (previously known as Tranzas) spans more than 20 years: over many years, the company has been providing scholarship support to students, regularly participating in career events, and offering students internships. Its representatives also teach a number of subjects in the university’s curricula.

The hackathon became a new format of closer interaction between the company and the university’s Information Technologies and Programming Faculty, the process which started last year.

“The hackathon took place at ITMO University’s Technopark – this is a joint event by the Information Technologies and Programming Faculty and the company Wärtsilä Digital Technologies. Wärtsilä produces navigation systems and maps for customers all over the world, including the US. A lot of the faculty’s graduates work there. During the year, we host joint career events with various partner companies, including Wärtsilä, where our students take part in internships. The representatives of the company also teach a number of disciplines at the faculty,” says Oksana Pavlova, senior engineer at the Information Technologies and Programming Faculty.

The main goal set by the hackathon’s organizers was to encourage students pursuing programming. The prize fund amounted to 150,000 rubles for the first place, 100,000 for the second place and 50,000 for the third place.

The event attracted a lot of interest – all available places were filled within just two days. A large number of applications were submitted by students of not only the Information Technologies and Programming Faculty but also the Faculty of Infocommunication Technologies, as well as other universities.

All teams shared one task – to develop an app for facilitating the navigation around Wärtsilä Digital Technologies’ headquarters, having just the building’s ground plans to draw on. They were given carte blanche on the form of the app’s realization, but the task’s authors offered a couple of options of what such an app could include: for example, a search through the employees’ offices or a feature for route-building.

“The hackathon took place over two days at the Birzhevaya Line 14 campus. The participants even slept there. Their task was to develop an app for navigating around the company’s headquarters. We had access to plans of several of the building’s floors. A couple of options for the app’s potential features were offered. On the following day, each team presented their project, and we chose the winners based on several criteria: the quality of presentation, the cross-platform property, as well as the app’s UI/UX design and its functionality,” comments Anna Gotovtseva, a representative of Wärtsilä Digital Technologies.

She adds that the competition brought together very different participants; for many of them, this was their first hackathon experience, and some didn’t even do commercial development before. In the future, the company plans to continue organizing such competitions, all the while increasing the number of participants.

“This was our first hackathon, we’d never organized such an event before, which is why we started small. But we got a colossal response from the students, there’d been an enormous amount of applications. While other organizations announce their hackathons three weeks in advance and then struggle to find the participants, we managed to fill out all the places in three days,” notes Anna Gotovtseva.

As a result of the intense work, the first place went to the Oblepikha team, made up of first-year students who, though new to the event format, managed to impress the company’s representatives with their presentation and the quality of their solution. Second and third places went to participants already working in such major companies as Yandex, VK, and Huawei.

ITMO.NEWS spoke to the winners to find out how they dealt with the task and what experience events like this offer.

Our task was to create an app for navigating around the offices. Effectively, we’d only been given a map to do so. The solution itself was free-form. This was a completely new experience for us, we’d never dealt with such tasks before. We have some understanding of the app development process, but we’ve only done it for ourselves, for the sake of learning. Here, we had to figure out everything on our own, and we’ve learned a lot of new things in the course of working on this task.

We’ve really enjoyed the format of the hackathon, and we plan to participate in more of them going forward. We plan to work on expanding our knowledge in the aspects that could come in handy at hackathons – this is a substantial spectrum of skills we need to brush up on so that we wouldn’t have to spend this much time learning something onsite.

Nikita Savinov, third-year student at the Information Technologies and Programming Faculty, the team Skies Will Help Us (second place)

We found the task pretty interesting. I can’t say it was especially difficult, because, essentially, we had to develop our own app – I think many are capable of that. The only limitation we had was that this had to be done in one day.

All of our team’s members are third-year students at the Information Technologies and Programming Faculty, but each of us is already working – some at VK, some at Yandex or Odnoklassniki. This was our first time participating in a hackathon all together, but each of us already had some hackathon experience. The team did well, everyone was pleased with each other and the results. What’s more, we just enjoyed interacting with our colleagues. We’ve become better at teamwork, and I think that we’ll take part in other hackathons in this line-up.