ITMO students became part of the Pending Futures project – a group exhibition that features works of contemporary artists from the Netherlands and Russia. The exhibition will run till September 15 on the Art Catch Exhibition Room online platform. 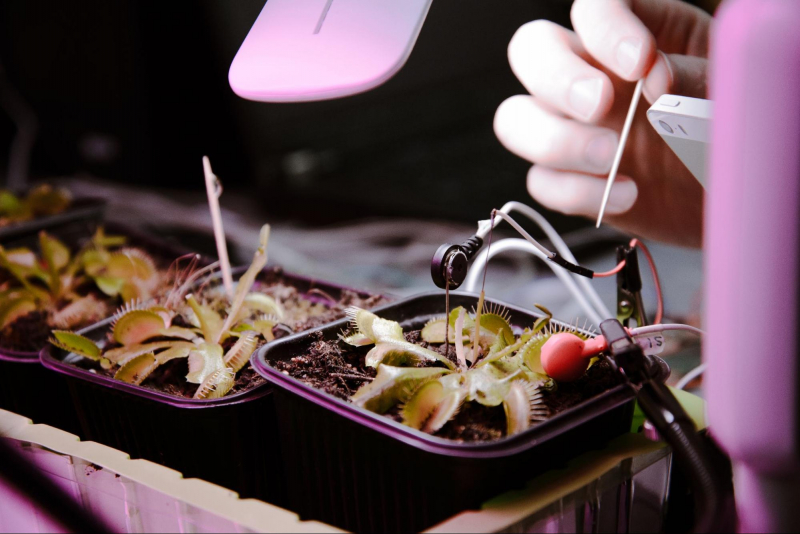 The Plant Intelligence project. Photo courtesy of the authors

As noted by Daria Kravchuk, an art manager and curator of the project, the exhibition aims to illustrate how art education responds to changing technologies, art practices, and our everyday reality.

“Today’s artists make much use of digital technologies, but how is this tendency reflected, for instance, in the educational programs of top-ranked art schools? Over the last decades, the Russian and Dutch systems were built on different approaches. While the first one focused largely on mastering crafts and skills, the second encouraged the use of various materials and critical thinking in projects. Today, both approaches, as well as all international art schools in general have to face rapid technological innovations that they simply cannot ignore,” notes Daria Kravchuk.

In their artworks, the artists explore various approaches, styles, and modalities that can help make the digital space safer, and so to say, “turn the annoying necessity into a harmonious context”.

ITMO.NEWS talked to Nadezhda Bey, Daria Purvina, and the team of the Plant Intelligence project to learn more about their artwork and their thoughts on the synergy of art and science.

I created my project during the lockdown in 2020. At that time, people felt anxious about the outside danger, and personal space for many including myself became a new space that must be rediscovered and explored. I tried to document my feelings and experiences during this time and, of course, reflect on what I could take out of it.

Something extensive and, perhaps, dangerous hovered over the world, and no one knew what to do about it. But even so, it was also a perfect moment to finally do what we’ve been putting off for so long. And that’s exactly what I did: I experimented a lot and mastered several new tools.

As a result, I made a 3D scan of my apartment, which I then started to fill with VR paintings. Various images with texts and pictures of me in different states complemented the space in an unusual way. That’s how I managed to capture what I wanted.

Together with Milena Bashkatova, we came up with the Gossip Flowers project. Everyone knows that plants release oxygen into the atmosphere and maintain air humidity. They can also serve as food and treatment for many animals, as well as be their habitats and what’s more – aesthetically pleasing decorations at any home. On top of that, they are extremely independent. They don’t need anything other than care, and sometimes they can even tend themselves.

Their independence is made possible by their 100% awareness of the surroundings that is demonstrated, for instance, when their roots grow in length to reach the water that they feel in the soil. They don’t need to do something to learn whether it was a right or wrong decision – they can feel it in advance, quite unlike people. Plants can communicate with one another by choosing certain ways and types of living, evaluate the strengths of nearby plants and thus optimize their own growth strategy. So presumably plants have their own awareness and personality and can be perceived as individuals.

Our work illustrates the anthropocentrism that pervades our culture in an artistic yet ironic way. When we create such illusions of human-like creatures, we strive to call attention to this misapprehension. And if humanization is still the only way to make people think about others, too, then there is no chance for a post-human future.

With the help of a lip-reading neural network, we analyzed numerous videos of blooming flowers to figure out what plants say when we’re not around.

The project, known as Plant Perception, is geared towards the study of interspecies interaction between humans and plants, as well as the mechanisms of plant perception. It’s based on the concept of plant blindness described as the inability of humans to notice plants in an environment due to their non-anthropomorphic nature and difficult-to-capture movements.

While an emotional connection between humans and plants may once and for all change our interactions with nature, including other species and plants, technologies are becoming one of the tools for understanding the non-human actors and interacting with other biological organisms.

The first part of the project is called Plant Intelligence and is focused on the study of the emotional connection through a mediator. For that purpose, we developed a virtual plant avatar inspired by the movements of Mimosa Pudica.

Our exhibit is a slot machine with a living plant inside and a hologram of a digital anthropomorphic plant avatar above it. Visitors can answer certain questions about plants using colored cards, and depending on their answers, the digital avatar turns happy, angry, sad, or surprised.

Thus, humans can show empathy for plants and test their knowledge about the world of plants in form of a game. Participants who answer most of the questions correctly get mimosa seeds, otherwise – a magazine about plants.

The second part, Plant Vision, is all about the hypothesis that was earlier put forward by several scientists: some researchers believe that plants may have ocelli or simple eyes.

Our project drew inspiration from Stefan Mancuso's research and his experiments with Boquila Trifoliata. It is a vine that crawls across a host tree imitating the color, shape, and even patterns of its leaves. This plant can change the host tree about four times in a lifetime.

This raises the question: how do plants understand how to reorganize themselves? While working on this project, we conducted several experiments. We recreated the experiment of Harold Wagner and used an optical system consisting of a microscope, a video eyepiece, and the right lighting to obtain color photos of the object through the upper epidermis of the leaf of Tradescantia Zebrina. And this proved that plant cells can be used as a lens.

Also, we ran an experiment to detect electrical impulses in Venus Flytrap caused by mechanical stimulation of hairs inside the trap to better understand the electrophysiology of plants.

Our research will eventually result in a neural network-based communication system for interspecies interaction. With the help of sensors, we plan to collect data on plant responses to humans and interpret them using neural networks.