On May 27, ITMO University launched the second annual exhibition of thesis projects by students from the Art & Science Master’s program, as well as participants of the Art Project as Thesis initiative. Among research advisors are prominent artists and researchers of new media: Natalia Fedorova, Dmitry Morozov (::vtol::), Ippolit Markelov, Helena Nikonole, Boris Shershenkov, and others. 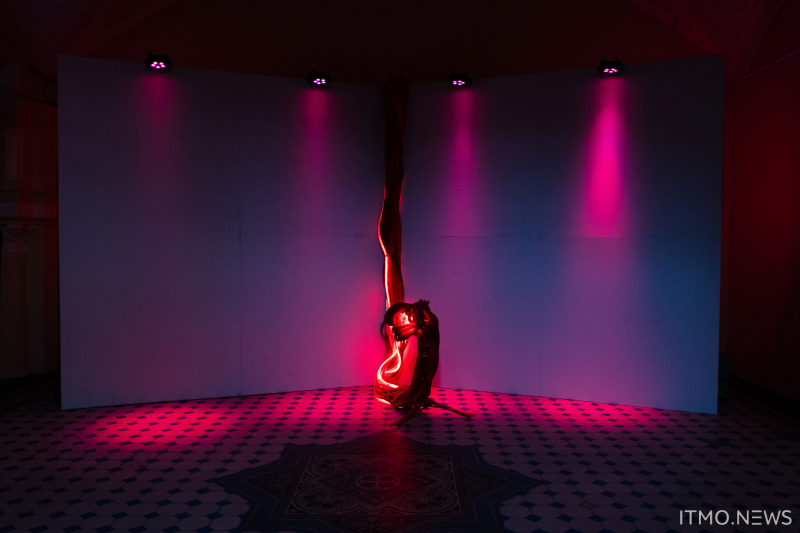 The old meeting the new

This year, the exhibition takes place at the former Church of Peter and Paul of the Imperial Commercial College. This neo-Gothic building is now home to ITMO labs. Thanks to the artists, it transformed into a space filled with technological objects, lighting installations, virtual environments, and separate booths for individual experiences. Placed in a historical building, all these cutting-edge art projects highlight the theme of the exhibition – it’s a study of the changing eras, as well as a contemplation on all the changes that our world underwent in the past few years.

“STAGE 2022 is quite different from last year’s exhibition. This time, there are more technological projects that reflect on social issues and the post-digital world. Plus, they are quite diverse, as this is a presentation of graduation projects. We can see what kinds of things and topics interest our young artists. Their work resulted in a vivid puzzle that represents the modern world. It’s special to us that the exhibition takes place at the historical building of a former home church that is now a campus of ITMO University, as the building itself shows how the intersection of different styles and ornaments can be put together and show off their best qualities. Scientific and technological art is timeless and constantly makes certain temporal leaps, so it’s in perfect harmony with the architecture and history of this space,” says Khristina Ots, the exhibition’s main curator.

The first object that visitors see is a black passageway that leads to a dead end. This is an interactive installation by Daria Lekontseva titled I Can Hear You: Parosmia and Other Phantoms of COVID-19. At the end of the passageway, three objects await visitors: an egg, an apple, and coffee beans, each covered with a glass cap. When you lift the cap, you smell an unusual and unpleasant scent that isn’t the natural scent of these objects. That’s how those with parosmia – the distortion of smell, one of the most common aftereffects of COVID – feel. This installation causes an uneasy feeling, intensified by the recordings of people talking about their experience of living through the pandemic and interrupting each other. The sound effects were created by Anton Shchegolev, another Art & Science student, with the support of Alina Karpova and Daniil Samigullin. The scents were created with the help of Svetlana Ulasevich, a specialist from ITMO’s Infochemistry Scientific Center.

Among other projects are many collaborations employing various media, as well as reflections on social traumas and the post-covid era. For example, artists Anna Ilchenko and Daniil Yakimov used the graphs of the spread of the coronavirus in seven countries during two years for the creation of sheet music for “sound mapping.” This project is the  result of a collaboration between Art & Science and Science Communication students and one of two theses completed as part of the Art Project as Thesis initiative launched by ITMO University in 2020.

Salva Me, an installation by Ksenia Bakhtina, is even more poignant: visitors get to come inside a tiny room in complete darkness and hear the artist chant “save me” in Latin, a dead language, surrounded by the sound of alarms. Such an arrangement immerses visitors into a state of anxiety, fear, and shock that is familiar to everyone.

Love in the post-internet era

New technologies that became an almost irreplaceable part of our lives transformed universal experiences, which now leads us to rethink some common practices, such as relationships and breakups. Love that takes place in the digital world inspired Ksenia Gorlanova to create her  love . eschatology. machine project. This installation is a light screen that looks like a smartphone – the work of an engineering team from ITMO and FabLab. On the screen, you get to see a dramatic love story without words or actors – just pixels of three colors that represent negative, neutral, and positive speech tones. According to the author, this is a simplified digital love story:

“Using natural language processing methods and machine learning models, we’ve marked up 10,416 messages from a 300-daylong text conversation. You can’t see the actual texts, only the dynamics of communication. There’s no info on who’s who and who said what – this doesn’t matter at all, just like all the messages lose meaning once the relationship is over,” says she.

Artist Roman Smirnov started a big scientific project that aims to create a musical instrument that’s capable of transforming brain activity into music. As of now, it’s at the experimental stage. Together with a research team from Pavlov Institute of Physiology of the RAS, Roman recorded the reaction of the brain on sound stimuli and started to work on a neural network based on encephalography data in collaboration with programmers from the International Laboratory of Biomechatronics and Energy-Efficient Robotics. At STAGE 2022, the project is represented by a video art piece documenting the experiments and scientific foundations of the research hypothesis prepared jointly with neurophysiologist Daria Fomicheva.

Another team of artists (Maria Moshchenskaya, Siraj Farhan, Veronika Prizova, and Mikhail Shalepo) headed by Ippolit Markelov reflected on feelings among other species. They have published a paper on biooptics – the “vision” of plants that helps them detect and process images. As part of their research, the team conducted experiments with Boquila trifoliata. This plant can mimic the shape of nearby leaves (even the ones made of plastic, as it turned out during the experiment). Special lenses in the upper level of the epidermis allow the plants to “see” using a mechanism similar to the human eye. With the help of scientists from ITMO’s International Research and Educational Center for Physics of Nanostructures and using a confocal scanning microscope, the artists were able to precisely determine all the parameters and characteristics (curvature, thickness, and length) of these microlenses. Based on this data, they’ve developed a model and an algorithm that imitates and visualizes the plant’s vision. You can check it out not only at the exhibition, but also using the Plantoverse app (requires a web camera).

Another project, this time about the feelings of a mycelium, was created by students of the program Industrial Ecology and Cleaner Production (also as part of the Art Project as Thesis initiative). The installation LivingAir is a biological air purification system. Evgeniya Gordeeva, one of its authors, explains that state and legal institutions are still at the discussion stage on the issue of odor pollution and its regulation. Even though there are many air purification systems available on the market, none are in use in Russia. The installation, made up of lab equipment, depicts one such method: it includes a purification system, a bioreactor, and a box with oyster mushroom mycelium as a test object. Visitors can gauge the efficiency of this biological purification system by comparing the growth of the mycelium in the box with a video of this process in polluted air.

“We entertained two theories about biological purification and the way the oyster mushroom will react to air pollution. It has been proven that mushrooms react to soil pollution by accumulating heavy metals; mushrooms’ reaction to gasses, on the other hand, had not been studied. That was why we wanted to see if we could produce an effect. We chose drain water residue as our contaminant. Such residue is collected and stored on sludge beds for further dehydration and disinfection. It emits ammonia, hydrogen sulfide, and mercaptans, which are responsible for the characteristic unpleasant smell. So, in the experiment we saturate the air with this smell and channel it into a bioreactor, where the odorous substances, diluted in the water, are destroyed and become a source of nutrition for microorganisms inhabiting activated sludge. The newly purified air is then transported to the box with the oyster mushroom mycelium. At the same time, the dead microorganisms and their waste products create a biomass that makes for a good fertilizer,” explains Evgeniya Gordeeva.

In total, the exhibition showcases 13 projects by nearly 20 artists who worked in collaboration with a team of researchers from ITMO and other organizations, as well as engineers, volunteers, and assistants.

STAGE will be open until July 24 at ITMO’s Lomonosova campus (Lomonosova St. 9, bldg. A, the former church building). The exhibition’s program will include artist talks and meetings with scientists. To stay up to date on the events, follow the official Telegram channel of ITMO’s Art & Science Center.