If you want to become a successful specialist, you have to do more than just know your field of work - such things as your ability to work in a team and think creatively are also important. Those are the so-called soft skills - and you can train them, as well! This semester, ITMO's Department of Youth Policy and Student Council launch the  StudentsUP  program that aims to help students do that by attending workshops by business trainers and experts in the field of communication. 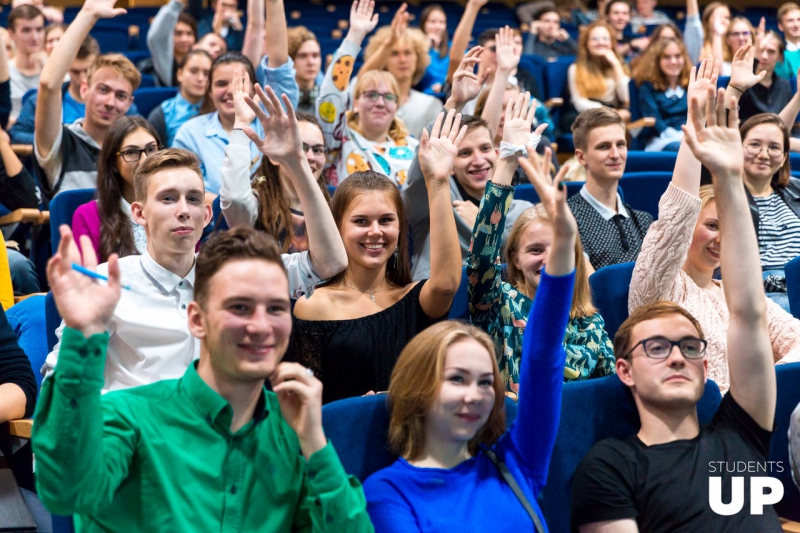 The program was presented to the first years and other students during an open meeting where its organizers spoke about extracurricular activities at ITMO University.

"Our program's motto is UPgrade yourself, as it allows to develop oneself, one's professional and soft skills. The latter are highly prized by employers, as it is most important to be not just a good specialist, but also a flexible, open-minded person. It is most important to be good at teamwork, and know how to gather and make use of additional information. Our workshops will cover all of these topics," comments Polina Litvinenko, manager at the Department for the Development of Student Initiatives and the program's coordinator.

As of now, the organizers have already conducted a workshop on teambuilding, where the students could learn about the many peculiarities of this process. This workshop was led by Misha Bedjanan, Rostelecom's leading business trainer; all of the others will also be led by federal-level experts. They will tell the students about soft skills in theory, as well as help train them during practical sessions. One can get acquainted with the workshops' schedule and read the students' feedback on the program's official page in Vkontakte; the upcoming workshops will be on such topics as:

Time-management: The workshop's goal is to teach the participants to adequately plan their time and distribute tasks, define priorities and follow deadlines.

Debates: This workshop aims to train the skills that allow presenting one's viewpoint to others. The participants will learn to defend their opinions and substantiate them with strong points. During the workshop, the students will be work as teams to discuss and propose solutions to different socially significant problems. Presentations: This lecture will cover the basic aspects of preparing high-quality presentations, as well as the common mistakes made by most presenters. The participants will learn methods to attract public attention, as well try preparing and presenting their individual projects.

Public speaking: This workshop presents an opportunity to get the knowledge and skills essential to effectively presenting one's ideas. The students will learn to maintain their composure and adequately plan their presentations and speeches.

"The program's participants will have the opportunity to train the skills they've got by participating in business games. We can already tell that students are very interested in such training format, and we've already accepted more than a thousand student application forms," underlines Anastasia Volkova, StudentUP's chief organizer.

Based on the application forms and the results of the initial training module, the students will be given expert recommendations and continue to follow the modules they chose, as well as get corresponding certificates.

During the open meeting on the opportunities students have at ITMO, the first years were told about the University's policy in what has to do with student initiatives. As of today, the Student Council supervises 129 student organizations, which include different clubs, teams, and the Volunteer Center. All the data on their activity is accessible via a common resource - ITMO.STUDENTS. "This is a new form of student self-governance, which will include all of the student clubs. For instance, we once had 12 different pages in VK, which reposted information from each other, and that was a total mess. Now, students have common access to all the information they need," shares Semen Shabanin, ITMO.STUDENTS Head.

He gave examples of how ITMO's students created their own clubs and fulfilled their potential. For instance, Alexei Kopyit from the Information Technologies and Programming Faculty couldn't make it to ITMO's basketball team, so he founded the Boat Racing club at ITMO University, which is one of its most rapidly developing initiatives; another student, Mika Nyrisheva, became Head of the International Students Council, and can now find translators from like five languages in just a moment. Anna Voloshina didn't pass the casting to Miss ITMO contest, but became one of Mister ITMO contest's organizers - point is, every of ITMO's students can choose what he wants to do and create the opportunities for that. "Actually, many of our departments' staff are former or acting students, and many work in a field different from the one they got their education in. For instance, we have student media, the Volunteer Center and other structures you can start a career in," adds Evgeniy Raskin, Head of the University's Department of Youth Policy, who himself completed a Master's program in Optical Technology.

So, how does one create their own club? Detailed information on this issue will appear on ITMO.STUDENTS in the nearest future, but the main criteria for approving one is already clear: the new initiative is to correspond with the university's mission and goals. Well, in any case, all one has to do is try and see what happens!