Studying From the Comfort of Your Own Couch

The founder of Courseburg (an online marketplace platform), who is also a graduate of ITMO University, Alexander Alkhov, spoke with us about studying online. He believes that while the number of online courses in Russia are still behind MOOCs in other countries, they are actually better in terms of quality. He also talked about which universities in Russia are leading in terms of creating online courses and what are the most popular courses in Russia. 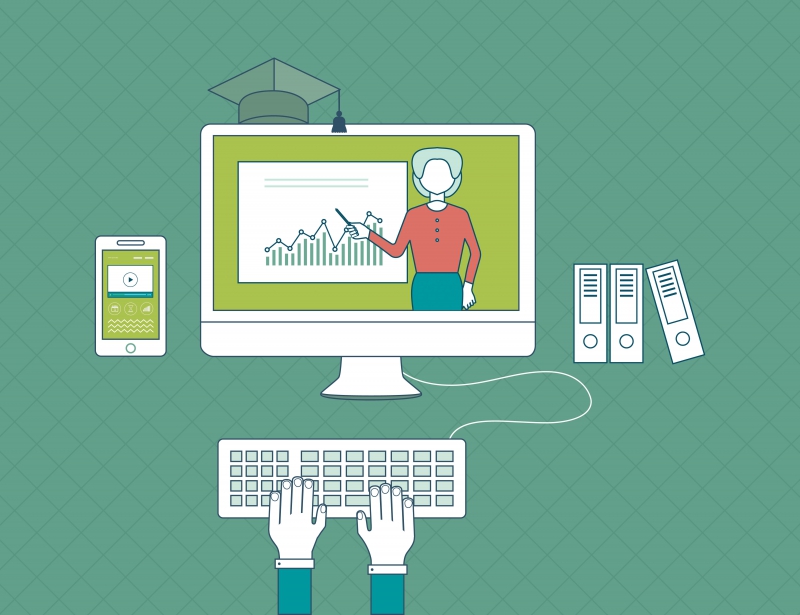 It was just five years ago that articles started to emerge on Habrahabr with titles like "What is online education?" or "How can you study at Stanford while lying on your couch". Now when your neighbor tells you about how he watched a lecture from MIT on programming, it doesn’t sound so shocking. Within just a few years, online education has conquered the market and become both a source of professional development and at the same time, intellectual entertainment.

They say that online education, in the form that we have become used to, was created at Stanford University. Then, professors started to post recordings of their most popular lectures online, the ones that students couldn’t listen to because there wasn’t enough space in the class. This format quickly became very popular. Realizing the promising outlook of this idea, in 2012 at Stanford, they launched an online platform for various Coursera courses. In Russia, the first such online platform was "Universarium". Massive Open Online Courses (MOOC) are now used all around the world.

Courseburg specialists say [link in russian] that traffic on online education platforms have grown by a quarter just in the last year. Moreover, whenuniversity applicants are looking for the best place to study they are increasingly basing this decision on the quality of teaching they see on online courses. And these are often not the most well-known universities that demonstrate quality knowledge and a high level of teaching on MOOCs.

On the basis of data from 420 courses available in Russia, the Higher School of Economics produced the highest number of content, with 99 courses uploaded on different platforms. Most courses posted in St. Petersburg were by Peter the Great St. Petersburg Polytechnic University (21 courses) and ITMO University was second with 18 courses. Unlike Western universities, the most common themes for MOOC’s in Russia are economics and business, which make up a third of total content. In second place are courses on natural sciences and medicine, which make up 18% of all courses. In third place by a long way are humanities subjects which make up 2% of courses. Most courses are recorded in Moscow (72%), then St. Petersburg (10%), and the rest are divided between the larger cities in the country. "All universities that wanted to create an online course have already done this. In some places they received special grants, in some cases they received part of a megagrant or got other kinds of financial support. The challenges of recording online courses are obvious: teachers need to be given time to do this, and also it takes a long time for the material to be approved. The advantages, however, are not as obvious. First of all, a whole team of specialists work on each course, who notice more details than just one person would. Secondly, these courses are watched by thousands of students who make it better and better with their comments and suggestions. Thirdly, teachers are no longer just reading off a paper but are becoming more animated. As a result courses are becoming more sophisticated. Furthermore, university applicants can evaluate a university based on their online courses. As such, by recording online MOOCs, universities are working on their reputation," - commented Alexander Alkhov.

In this case it’s important that students, for example, from a technical university can study computer science using courses from an IT University. This is why many universities abroad are now starting to move towards online education, added Alexander Alkhov. Sometimesa lecture that has been recorded and edited hundreds of times is much better quality than what a teacher can do in reality. Russian education experts are discussing the opportunities of introducing this system in our country. In theory, universities, which for some reason or another can’t get top professors, can teach students some subjects via online courses from leading educational centers. The trend around the world is such that for creating online courses, a few universities can work together. This is beneficial, firstly for universities that are not well known as they can promote their educational opportunities thanks to more famous institutions. Also according to the founder of Courseburg, it’s a very good tactic to post courses on a few online platforms at the same time, like Higher School of Education does.

Alexander Alkhov feels that Russian universities have just as good quality courses as overseas while the number of courses are still not that high. However, there is good news, at the beginning of 2017, Russian universities announced the launch of dozens of new courses, so statistics on the development of online education in the country will be quite different at the end of the year. In addition, with the launch of the new platform "Open Education", universities of the country now have some of their best courses available online for download. The development of this area means that Russians no longer have to deal with automatic simultaneous translations while watching foreign lectures, but can just switch to materials in their mother tongue.

Another question is how seriously do people take online education? In an interview with Alexendar Alkhov, he explained that according to Coursera data, only 3% of those who start online courses finish them, and of these, only 1.5% of all students successfully pass their final test. With fee-based courses, the situation is only a bit better.

"Everything depends on how systematic students are in their approach to education, and how well the course is made. The internet is a tool where you can easily switch from one thing to another, especially if the content is boring. This is why, in my opinion, lectures in online courses must be balanced. They shouldn’t belong, monotonous explanations of theory, and then a swift transition to practice. Also students need to give time to focusing on what is being shown on the screen. Otherwise their attention will be scattered and they will lose interest. Sometimes they can find a much more interesting video on the same topic on YouTube", concluded the founder of Courseburg.