“White Night of Technology”: How to Ensure Cybersecurity and Teach Neural Networks to See

The history’s biggest hacking attack WannaCry, the FaceApp scandal, the improved Google Assistant, Elon Musk’s “neural lace” and Facebook’s ambitious plan to reject mouse and keyboard in favor of the “power of the mind” – these were just some of the hot topics in science and technology in the last few months. These and others were discussed last Wednesday at the festival of popular science “White Night of Technology” at the Benoit1890 cultural platform. ITMO.NEWS has put together some of the most interesting bits from the discussion. 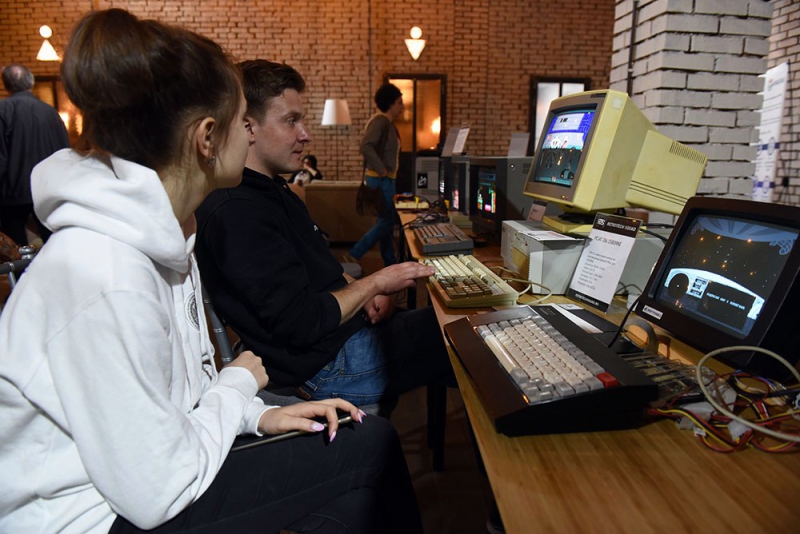 Neural networks: how to teach a computer to see

Scientists have been pondering this question since mid-20th century. In 1943, Warren McCulloch and Walter Pitts proposed a model of a neuron (a single cell of a neural network) to be used for machine learning. 15 years later Frank Rosenblatt showcased a simple neural network that could distinguish between objects in a two-dimensional space. Although back then image analysis was still unattainable. Why?

“Imagine you have a picture made of 9 pixels placed in a 3 by 3 grid. We take the first column, add the second one below and then the third – and we end up with a 9-pixel-long vector. Each pixel is then sent to a neuron. It would be the same as grabbing a book and reading the first letter of each line – we’d eventually read the page, but we won’t understand any of it” – explained Ivan Burtsev, Master’s degree student at ITMO University and developer at the Kuznech start-up.

These days Facebook can easily discern users’ faces on their photos, Twitter blocks forbidden content without need for moderators and services and apps based on Microsoft’s Project Oxford API can easily determine a dog’s breed or someone’s mood in a photo. New technologies based on neural networks appear every day: they’ve already been successfully integrated into banking, marketing and entertainment. The Russian-American start-up Kuznech uses convolutional neural networks in business projects and various applications. The company has already won 12 prestigious international awards in IT, received a grant from Skolkovo Foundation and registered several patents in Russia and U.S. One of their products is an app called Logotrakr that helps track the appearances of company logos during broadcasts, in commercials, TV shows, films and music videos. This helps analyze the rate of appearance of a brand in social media and track its popularity.Another solution for businesses is visual merchandising. Neural networks can analyze a store display and determine which products are present, categorize them by brands or packaging colors and compile a report to help determine which products are in stock and which ones need to be replenished.

Kuznech has also developed a project called LikeThis that helps users determine what someone is wearing based on a photograph and help them find something similar without overpaying.

“Imagine you liked the t-shirt someone was wearing on the street: you take a picture of their outfit, press “Submit” and then the magic happens. The neural network analyzes the image and determines the parts of the image that depict clothing. So you take the photo, send it to the system, it describes the item, for example, as a floor-length dress and finds similar items in our partner stores. It could be a picture you snapped on the street, something you saw in a magazine or took a screenshot of online – LikeThis works with anything”

Among their other projects is a custom filtering system for adult content. The company uses several methods which include identifying the content producer, watermarks and warning text, analyzing faces, poses and even skin types. The latter, adds the developer, is what most often helps the system not to classify paintings and art as adult content.

The future of neural interfaces: how real are Elon Musk’s plans?

Another emerging market is the development of brain-machine interfaces. It’s no coincidence that research into the matter is funded not just by developed countries’ largest research centers, but even by leading tech companies like Facebook or Elon Musk’s Neuralink that was created this April. The founder of Tesla and SpaceX plans to create a technology that would link computers and the human brain. In the near future it could help victims of severe brain trauma; in the long-term perspective, it could make humans smarter and prevent them from being enslaved by AI. This could be implemented using neural lace, a technology that would implant the brain with tiny electrodes (you can read more about it in our article here).

Facebook is also working on a similar system that would eliminate the middlemen of brain-machine interaction – the keyboard and mouse – to completely transform the way we work with computers. Their aim is to create a system that would allow typing 100 words per minute by deciphering the speech center’s neural activity. As Vitaly Zubchenko, head of ITMO University’s NeuroNet IP-accelerator, notes, neural interfaces have been around for more than 50 years. The first one is probably the Stimoceiver – an electronic device that can be controlled through an FM radio connection. In the 1950s Jose Delgado, a neurosurgeon at Yale University, connected it to a bull’s brain and managed to affect the animal’s movement using a computer device. In 1988, Farwell and Donchin’s “virtual keyboard” was created – this method allows typing text by selecting letters from an image using one’s mind. This method allowed users to “type” at the speed of approximately 5-6 words per minute; a modern person types about 20 words per minute using their smartphone, says Mr. Zubchenko.

But when will Facebook ramp that up to a 100 words and when will Elon Musk find ways of effectively integrating his neural lace into a human brain? Vitaly Zubchenko estimates this could be done in seven to eight years. Many experts lean towards 2035, he says. Still, scientists need not only to find a way of connecting to the human brain, but also solve the issue of quickly processing the information.

WannaCry: how network attacks happen and the basics of “cyber-hygiene”

Neural networks and neural interfaces have been a subject of the media for some years now. However, the WannaCry attack is something that has become a news topic just last week. On May 12, the extortion virus attacked computers in some 150 countries around the globe. It encrypted files on the infected machines and demanded 300 dollars’ worth in bitcoin for ransom.

The attack has been estimated to be one of the biggest in history. Companies are still evaluating their losses. The analytics company KnowBe4 that specializes in cybersecurity has estimated the loss at a billion dollars. This includes the losses incurred from loss of data, performance stoppage, interruption of workflow, damage to reputation, etc. Although the hackers themselves didn’t gain much from the attack, claim experts from McAfee. As of now, their bitcoin wallets have received 302 payments for a total of USD 116,000.

Analysts believe that their main intention was not profit, but publicity. Enterprises such as FedEx, Renault, Nissan, the Spanish telecommunications giant Telefonice, 48 hospitals in UK and many others fell victim to the virus. In Russia, the virus even affected law enforcement bodies such as the Ministry of Internal Affairs  and the Investigative Committee. Mikhail Zimin, CTO of TS Solution and an expert in information security, agrees – compared to the usual numbers, the perpetrators indeed have not profited that well from the attack. But should one even trust the claim that the decryption key would be sent upon reception of the payment? “The issue is that such viruses have existed for many years: in the last five years or so, hackers have used them to a great extent, chiefly for profit. But under no conditions should one pay them. The nature of CryptoLocker is such that it’s not likely that you’ll receive a decryption key even if you pay for it” – explains Mr. Zimin.

So why has this malware caused such a massive contamination? One factor is that its creators have mixed up quite a cocktail by combining an extortion Trojan with a net-worm – the most effective method of virus distribution. Another factor is that WannaCry utilized a vulnerability that was known since March of this year.

“They discovered the vulnerability in March, released a patch to fix it in April and now it’s May and we’ve got this whole spectacle. The reason is that a lot of systems, both at regular users’ homes and at corporate offices, simply weren’t updated. If they were, this disaster could have been easily avoided” – he says.

According to experts, the infection rate is going down, but similar attacks are to be expected in near future. So it’s important to follow even the most basic rules of “cyber-hygiene”. At the very least one should install updates in time, use an antivirus and perform regular data back-ups (preferably non-networked), says Mikhail Zimin. Companies also need to concern themselves with usage of IPS-solutions, he adds.