This end of February has become St. Petersburg’s coldest in the past several decades. According to Alexander Kolesov, Chief Meteorologist at the Northwest Center of the Russian Federal Service for Hydrometeorology and Environmental Monitoring, we last had such cold weather back in 1955. Europe experienced a drop in temperature as well; actually, the recent cyclone even got a nickname, the Beast from the East. So, what is happening to the climate, and how will these global changes affect St. Petersburg? During a lecture at the Institute of Design & Urban Studies, Artem Pavlovsky, climatologist and member of the State Research and Design Center of St. Petersburg Master Plan, talked about the reasons behind climate change, and its effect on the development of urban territories. 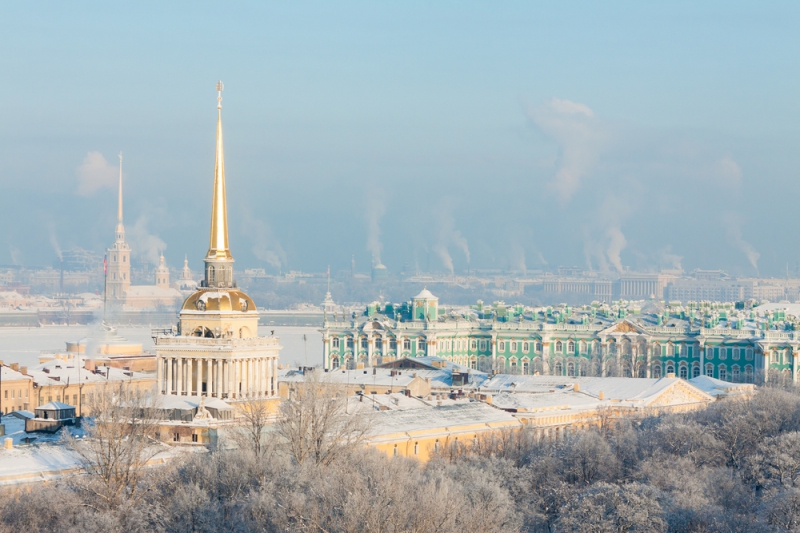 Why is it that we have to meticulously choose the sources when studying climate change related issues?

In recent years, climate change got so much attention that it has become quite a trite topic. You often get to listen to different speculations in its regard. This is why I urge you to draw on the official sources that explain most issues that has to do with climate change, for example the World Meteorological Organization, the International Panel on Climate Change, or the Federal Service for Hydrometeorology and Environmental Monitoring of Russia.

Still, I have to say that people have started to become more serious about discussing this problem. You can tell from both research articles and the media, as well as different social projects; it probably has to do with the fact that climate change started to manifest itself more in people’s lives. Many people now understand that we are facing something that has never happened before.

So what is happening to the climate?

The climate on our planet has been changing throughout all of its geological epochs; still, what we’re talking about are the changes that happened in the miniscule timespan that covers humanity’s development during the industrial revolution and up to the modern times. Starting with the end of the 19th century, we observe rapid changes in what has to do with the general meteorological variables: temperature, air pressure, water vapour, mass flow, and others. Currently, we are living during the time of anthropogenic warming; the recent decades were the warmest in the history of meteorological observations.

Still, there’s an important thing one has to understand in regard to the modern climatic period: global warming does not mean that it’s getting warmer just everywhere. Certainly not. There are even territories where it can get colder. This is only natural, as Earth has a complex structure, and there are many factors that affect local manifestations of different climatic variables. For instance, in 1998 the warming affected the territory of Northern America the most, and in 2007, it manifested in the Russian territories of the Arctic Basin.

Humanity has become a geological force

In the time of dinosaurs, the concentration of carbon dioxide in the atmosphere was very high, then it gradually diminished in the course of the following 50 million years. Nowadays, humanity has become a new geological force, as it releases the carbon accumulated in fossil fuels back into the atmosphere.

Research shows that global warming manifests inside the troposphere - the part of the atmosphere we exist in, and the stratosphere is getting colder. Why does that happen? The reason is because greenhouse gases - carbon dioxide, methane and others - intercept the long wavelength radiation that goes from Earth, and thus the “greenhouse” is formed. In earlier times, when the atmosphere was more transparent to radiation, Earth’s heat distributed more evenly amongst the layers of the atmosphere; now we’ve “trapped” most of it down here.

Why is it important to consider climate in urban planning?

Urban planning implies that we have to account for the tendencies of sustainable development of territories, as well as consider all possible factors, and plan for decades ahead. In the current situation, climate change issues are becoming most relevant in this regard.

Still, let us first make sense of the peculiarities of climate in a metropolis. Apart from the effect of the global and regional tendencies, the metropolis itself affects the climate. We can trace how the urban heat island in St. Petersburg has been changing since the 19th century and up to the present moment. In the very beginning, St. Petersburg was “colder” than its neighbour cities like Tallinn and Helsinki, but since the middle of the 20th century, the situation has changed. Amongst other things, this is related to St. Petersburg’s postwar development.

Is this situation typical? Let’s take Tokyo as an example. Once, the city was colder than its neighbours, but now it’s warmer, as well. Therefore, we can say that the tendencies are similar.

Amongst the key factors contributing to the development of a heat island are not the emission rates, but a factor that has to do with the changes in albedo, which characterizes the diffuse reflection of solar radiation. St. Petersburg’s surface has greatly changed over time; earlier on, the incoming shortwave radiation was reflected, and the corresponding part of the spectre was absorbed by the vegetation; now, asphalt and roofs absorb practically everything.

What are St. Petersburg’s future challenges that have to do with climate change?

As St. Petersburg is a coastal town and a sea port, the different water-related hazards pose the most risks. Surely, the city has a flood prevention facility complex, but climate change can pose new challenges and threats. From 2011 to 2018, the complex has already prevented 14 floods; what is more, most floods now occur in winter and not in spring as they used to, and the consequences of winter storms are much more severe.

If we look at the dynamics of global sea level change, we’ll see that the global sea level has risen by 2 cm over the past hundred years. According to the International Panel on Climate Change, it will become even higher by the end of the century. The level of the Baltic sea, for instance, rises by 2mm every year. In the worst-case scenario, the efficiency of St. Petersburg flood prevention facility complex will be decreased, and the city will yet again face the danger of flooding.

How can global climate change affect St. Petersburg in general?

Many say that St. Petersburg is unique, as the very idea of building a city in this latitude seems absurd. Still, let’s take a look at the climate conditions in St. Petersburg. According to the Köppen climate classification, St. Petersburg is located in the humid continental climate zone with a warm summer and a snowy winter; such climate is also called boreal. Its conceptual difference from the other types of climate is the seasonal snow cover.

If we look at the other cities over one million in the same climate zone, it becomes apparent that it is quite habitable - for instance, such cities as Sapporo, Montreal, Buffalo, Milwaukee and Toronto also have boreal climate. By the way, the famous Golden Horseshoe, the most densely populated and industrialized region in Canada, is also located in this climate zone. Therefore, the conditions here are quite favorable for developing major human settlements.

Still, the 21st century has several unpleasant surprises for us. According to most possible scenarios of the development of world economy, the temperature will continue to grow, and the climate will change. So, what will happen to the climate in St. Petersburg? For one, the average yearly temperature may grow from 5.4 to 10 degrees Celsius, and the annual precipitation - from 634 to 766 mm.

In essence, this means that St. Petersburg’s climate can become oceanic, i.e. moderately warm with a relatively narrow annual temperature range, high relative humidity, cool summer and mild winter. What’s most important, the seasonal snow cover will be no more. What will it be like? The climate conditions of St. Petersburg will become similar to those of Copenhagen, Birmingham, Linz, Hamburg or Glasgow. Surely, one can say that living in a place like Copenhagen is great, but what about the change of seasons and the like?

Basically, there are great cities in every climate zone. Still, the point is that urban planning, architecture and the very process of construction have to consider the climate zone’s peculiarities. Naturally, it’s very hard to tell how exactly everything will change in the future. Still, we have to cater to the tendencies that are already apparent, and account for them in our future projects.

Who conducts research on climate change in St. Petersburg?

To begin with, such research is conducted by climate change modeling specialists. In St. Petersburg, it’s done at the Voeikov Main Geophysical Observatory which acts as the Russian Federal Service for Hydrometeorology and Environmental Monitoring’s climate center. Its specialists focus on modeling climate change with regard to the different development scenarios of world economy.

What is more, there’s the International Panel on Climate Change. Any specialist in the field of geosciences or any other field who needs to learn about changes in hydrometeorological variables can use their databases and get expert assessment of the possible changes of these variables with regard to different scenarios in particular regions.

Specialists from Scandinavian countries largely focus on regional modeling, for example, the Swedish Meteorological Society and others. These countries have special institutions where they model regional changes of climate, as well as changes in such an essential parameter as the sea level, which is most important in the Baltic region. We actively collaborate with our Scandinavian colleagues - recently, we’ve had an international program that was curated by the Committee for Nature Use, Environmental Protection and Ecological Safety. We also took part in the assessment of geological and climatic hazards to St. Petersburg as part of our collaboration with Finland; now, we will likely focus on adaptive issues, including those that have to do with water governance.

Artem Pavlovsky, climatologist and member of the State Research and Design Center of St. Petersburg Master Plan, heads the institution’s department that focuses on ecological feasibility studies of the urban environment, including the issues of land-use planning and zoning. Currently, Mr. Pavlovsky also acts as a guest lecturer for the “Sustainable Urban Development” course of ITMO’s Institute of Design & Urban Studies.