Do It Yourself: How to Start Projects from Scratch and Make a Career out of Your Hobby

How to make your ideas a reality without almost any resources at hand? How to find like-minded enthusiasts set on working for a common goal? How to turn your interests into a successful career? Kirill Bodrov, head of ITMO’s Open Laboratory of Ideas, Methods, and Practices (OLIMP), shared the answers to these topical questions during his lecture held as part of the Science Week in the Gogol Library. 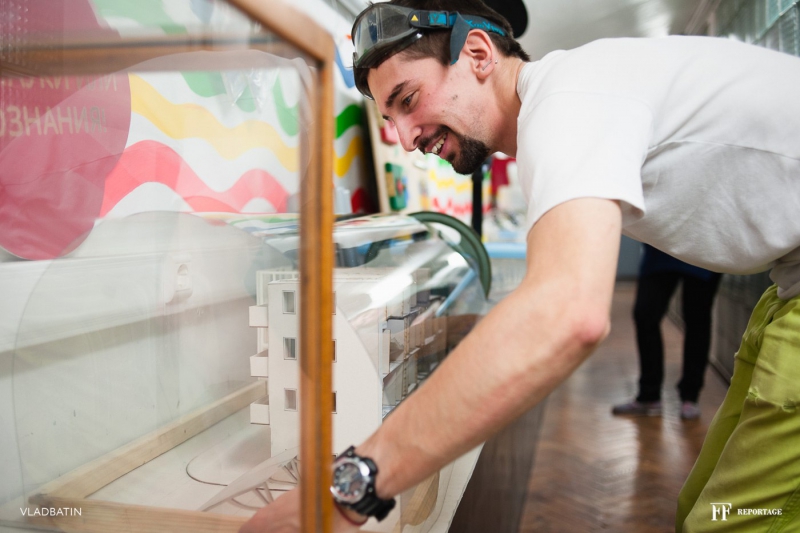 Why should you start your own project?

It often happens that newly-graduated students can’t find work, become depressed, and end up taking the first job they are offered, even if it has nothing in common with their degree major. When my friends and I were graduating from university, we thought long and hard about this issue and came to a realization that professional self-fulfillment requires practical skills. Project work is a great way to acquire these skills. Why starting your own project is so important? For one, it boosts your confidence like nothing else does. No praise can replace the significance of seeing that your work bears real results. For a tech student, it could be developing a device or a software program, for humanities students, it could be launching a social project aimed at solving a real-world problem; no matter what the project is, it’s really rewarding to see it working out.

Why should you keep trying even if you fail?

Starting your own project is important, but what’s even more important is sticking to it even if you encounter setbacks and don’t see any visible results over a long time. Many people choose to quit as soon as something goes wrong. But there is a way to prevent that: what you have to do is to notice the short-term, midpoint results and remember that all the buzzing success stories like the one of Steve Jobs are first and foremost the stories of failure. They didn’t accomplish things on their first attempt, they were just lucky that failures happened early on, when they were young, and they had the wisdom to use this experience to identify the project’s weaknesses and keep working on improving those. That’s why you have to be persistent and, in a good sense, combative, to succeed.

That leads to the importance of personal development. Techies always have a hard time understanding what personal development is and why they need to pursue it. It’s easy to see where they’re coming from: we’ve been taught to think that society judges people on their abilities and skills only. That’s why it’s often so hard to explain that much depends on the way you communicate and present your ideas. There are people out there who are really talented in what they do, but once they come to a job interview it’s impossible to get anything from them, they just can’t convey what they’re capable of. We at OLIMP recognize this problem and have developed a special mentorship system which helps participants get an expert opinion on why something went wrong and how they might use it to build on their strengths.

Why is it better to rely on your own resources?

We created OLIMP from the point of view that since we can’t afford expensive equipment, let’s assemble it by ourselves. Oftentimes people opt for buying ready-made equipment but don’t know anything about it, so it takes them months to get used to it, half of this time being spent on warranty maintenance. But when the warranty period ends and they try to do the reparation work on their own, they start learning much faster. Sometimes, to start a new project you don’t need much. For example, what does a programmer need to do their job? Just a computer and some tea with cookies. As soon as we equipped our laboratory with a computer, we found programmers. You only have to give people the equipment they need and create good working conditions to help them unleash their potential.

How to make a good team of like-minded people?

Of course, it’s not always easy to work in teams. Some programmers and engineers find it much easier to work alone, rather than in a team. Many people believe that in our capitalist world if you want to get something you have to pay for it. In fact, it doesn’t necessarily work this way. We promote the idea that you don’t always have to buy specialists but can cooperate with them instead. For instance, I know a man who really wanted to do web development. He found 30 people who also wanted to learn web development, ten of whom eventually became his team members. It’s a good example of how a team is formed. Initially, there can be quite a lot of people in it, but some people gradually start thinking that that’s not what they want to do with their lives and leave. That’s why you have to be really enthusiastic about your project so that even if you stay alone you continue working on it.

But it’s not that simple. Enthusiasts are often overachievers who put a lot of time and effort into perfecting their projects instead of completing them. The problem with this is that there can be several teams working on the same thing, and it’s important to finish first. That’s why you have to control yourself and showcase the results of your work from time to time.

How to start making money on your project?

Some people say that it’s not enough to be passionate about what you do to become a scientist. I think it’s wrong. To work on a research project, it might come in handy to know how to write scientific articles and apply for grants. But being a scientist is not only about that, but also about doing what you like. For example, you’re interested in 3D printing technologies, but you don’t like the way things work in this field and you want to change something. So you start looking for solutions, and this search is what science is about. Thus you can be a scientist without even knowing it.

The most important thing is to find what you want to do. Otherwise, others will decide that for you and you’ll end up doing something you don’t really enjoy. Your projects can grow into successful startups. You just have to monetize your ideas. For one, I knew a person who loved robotics and wanted to become a teacher. He managed to launch his own educational platform where he teaches robotics to children. He found what he’s interested in. And you can do it, too.