On the Origin of Memes: Meme Scientist Explains Post-Irony and Future of Internet Culture

Is memeology a science? This was the question posed by Taras Sychev, an editor for the online news aggregator Lentach and a “memeologist”. On December 10, he gave a lecture at ITMO University, organized by the Center for Science Communication, during which he talked about the origin of memes, the history of Russian online culture and memeplexes. ITMO.NEWS provides a rundown of Mr. Sychev’s lecture. 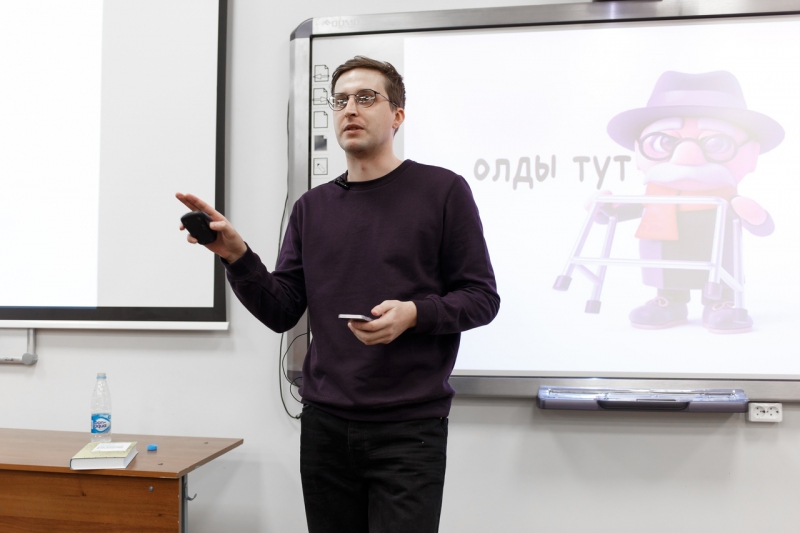 First off, let’s differentiate the two meme sciences. The first is memetics, which studies the deeper meaning of memes from the points of view of culture, psychology, and sociology. Its founding father is said to be the British evolutionary biologist Richard Dawkins, who in his 1976 book The Selfish Gene proposed a basic unit of cultural transmission: a meme. A meme to memetics is what a gene is to genetics. Both evolve and propagate according to the laws of natural selection. Any idea, symbol, expression or action can become a meme. Dawkins’s examples of memes included idioms, types of arched bridges and even stew recipes.

Throughout the process of artificial selection, memes have the power to affect their environment. To amplify their power, they gather into memeplexes. One example of a memeplex is religion, where memes such as evangelism, transcendence, mystery, food, and sex have come together to spread among as many minds as possible.

Memeology, which was founded by internet users, studies the origins and propagation of memes online. An internet meme is any bit of information that has spontaneously grown popular online. It can take any form: a picture, a phrase, a video, or a sound.

The first online meme was the emoticon :-). Interestingly enough, back in 1969, the writer Vladimir Nabokov had suggested that a symbol be used to denote emotions in written text. But it was on September 19, 1982, that professor Scott Fahlman at the Carnegie Mellon University used a colon, dash, and bracket on the university’s online bulletin board, a symbol that quickly caught on and spread across other networks.

In Russia, the dawn of meme culture occurred in 2005-2007. One of the first big memes was Preved Medved, a picture meme based on artist John Lurie’s painting Bear Surprise to which a random Russian user added a purposefully misspelled Russian word for “Hello”.

Another remarkable Russian meme was the “Witness from Fryazino”, a tracksuit-laden man spotted in a series of wedding photos taken in the town of Fryazino. The man’s unchanging pose in all the pictures amused online users, who promptly began to insert his image into various historical photos; according to the internet, the Witness from Fryazino was present at the Battle of Berlin, took part in the construction of Egyptian pyramids, and even had his likeness drawn by cavemen on the walls of their dwellings.

Where do memes come from?

Information breeds ideas; ideas form behavior; behavior leaves artifacts. That’s what memes are. When you encounter one online, it leaves a cultural imprint on you, which you later modify for your own needs.

There’s no recipe for making a meme, and that’s why we cherish them. Nevertheless, there are a few criteria that contribute to their popularity. The first is the prominence and prestige of its source; anyone can say a funny phrase, but it might not become a meme. Things said by people in the limelight are more likely to become memes, such as Russian PM Dmitry Medvedev’s infamous quote “There’s no money, but hang in there”.

Another criterion is effort: sometimes, groups of users will attempt to “force” a meme into the collective conscious. Relevance matters, too: a Lentach-made meme about a “Beautiful story with a sad ending” on the occasion of the Russian football team’s loss at the World Cup managed to get 18,000 likes and 2,000 shares in very little time, all due to how close to home it struck for the community.

A future for memes

A while back, ironic memes were in style. Today, post-ironic memes are the thing. They don’t even have to be of great quality: I once took 10 random pictures from a few post-ironic meme communities and shuffled the captions between them. Users had a hard time telling the difference between the new ones and those that came before.

Many memeologists say that the Russian internet is about to enter an era of meta-irony. I, however, disagree, because it is far too complex in terms of humor. Anyway, as of today neither memetics nor memeology are real sciences. They’re called pseudo-sciences, yet many people work and do research in these fields. Perhaps in the future, they’ll be taken more seriously.