Since the time of its foundation, researchers of ITMO’s International Research Center of Functional Materials and Devices of Optoelectronics have succeeded in publishing over 600 research articles, getting over one and a half billion rubles in funding from the Ministry of Science and Higher Education of the Russian Federation, Russian Science Foundation, and Russian Foundation for Basic Research, and completing 36 major projects, international-level projects included. As part of an Open Day, researchers from the center’s six laboratories and its head Alexey Romanov spoke about its structure, international research activities, and project work. 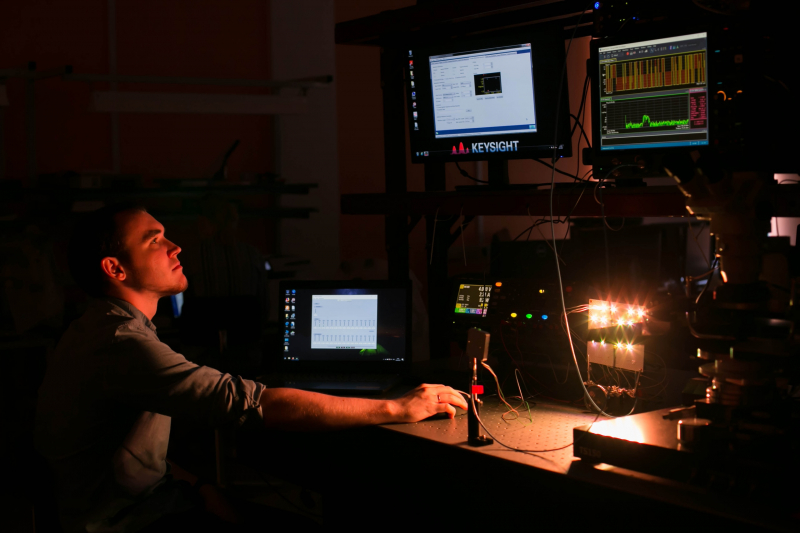 ITMO’s International Research Center of Functional Materials and Devices of Optoelectronics was founded in 2016 as part of the School of Photonics, and still has close ties with its Faculty of Laser Photonics and Optoelectronics, the faculty’s dean Alexey Romanov being the center’s head, as well. Its research focuses exist at the interface of photonic engineering, materials science, and laser technologies, in both their theoretical and practical aspects. For one, the center’s researchers study functional materials of photonics and microelectronics: semiconductors, multiferroics, nanostructured materials, graphene, and biomaterials, as well as design and study electronic and optoelectronic devices and systems that are based on these materials. These include various radio-photonic devices, semiconductor lasers, photodetectors, light diodes, fiber optic and laser equipment, and graphene-based biosensors.

The Transnational Scientific and Education UniFEL Center for Advanced Methods of Materials Research, which was created in 2015 as a result of an agreement between ITMO, European X-ray Free Electron Laser and TU Bergakademie Freiberg, is now also part of the center. Since 2019, ITMO’s researchers have the opportunity to conduct experiments using European XFEL, the world’s most powerful X-ray free-electron laser designed for the purpose of solving tasks in the fields of fundamental and applied science, as well as medicine and advanced technologies.

For one, the International Laboratory of New Materials and Nanofilms for Microsensors has spent four years collaborating with the American company Nitride Crystals Inc., studying the application of graphene and graphene-based films in production of sensors for detecting proteins and oncomarkers. The International Laboratory “Laser Systems” collaborates with INRS-EMT Canada and National Institute of Scientific Research of the University of Quebec on the project called “Optical reservoir computing for machine learning at the speed of light”. Researchers of the International Laboratory of Silicon and Fiber Photonics and Photonics of Microsystems in collaboration with the Institute of Physics of the Czech Academy of Sciences have conducted an experimental study on the relationship between intracellular processes and the power and laser emission exposure time in the visible range. The International Laboratory of Promising Nanomaterials and Optoelectronic Devices is currently participating in an international research on destruction processes of modern functional materials at various scales (micro, meso, macro) as part of a Horizon 2020 grant.

Since the center’s foundation, its members have co-authored over 200 research papers with international researchers, and last December, the center launched an international journal, Reviews on Advanced Materials and Technologies, under the umbrella of ITMO University.

On the whole, in 2016-2019, the center’s researchers published 578 articles, many of which – in such high-ranking science journals as Nano letters, ACS Nano, Applied Physics Letters, and Scripta Materialia. The publications’ average SJR is 0.9, and 2016 review on gallous oxide, for example, has already been cited over 230 times.

Apart from pure science, the center actively develops its engineering aspect and places much emphasis on project, innovative and patent activities. In 2016-2019, it completed 36 major projects and got 32 patents, the number increasing every year: from five in 2016 to 14 in 2019. For example, researchers at the International Laboratory of Promising Nanomaterials and Optoelectronic Devices developed a Li-Fi system that makes use of the visual range of the electromagnetic spectrum for IoT and an intelligent lighting environment with a transfer speed of 40 Mbit/s at the distance of four meters – the invention got an utility patent. In its turn, the International Laboratory of Superfast Semiconductor Laser Emitters and Photodetectors developed a technology for quantum-cascade lasers of mid-infrared spectral range with an arch resonator, and patented a mode selection method.

All of the center’s research activities are possible thanks to its advanced equipment, for example a Tescan MIRA-3 scanning electron microscope that allows for making images with a resolution of 1.2nm. The center’s staff also have access to the equipment of their partners, for example that of Ioffe Institute’s Core Facilities Center “Materials Science and Diagnostics for Advanced Technologies” and Connector Optics LLC.

The center’s researchers believe that its future lies with a new generation of specialists, so they pay much attention to working with students. Master’s programs Light Guide Photonics and Programmable Electronics, Photonics Materials, Laser Technologies, LED Technologies and Optoelectronics, and many PhD programs are conducted on the center’s basis. PhD students also get an opportunity to enter joint educational programs with Freiberg University of Mining and Technology (Germany), McMaster University (Canada), and University of Côte d’Azur (France).

The center actively involves students in research projects. As of today, out of 187 of its staff members, 43 are students and 64 are young scientists under the age of 35.