A team of ITMO University specialists and their German colleagues have successfully used the world’s largest free-electron X-ray laser to conduct an experiment on ultrafast demagnetization of ferromagnetic material using femtosecond IR excitation. While studying the dynamics of this process, the scientists had discovered a new type of X-ray scattering in ferromagnetic material, which occurs immediately after the laser pulse and lasts for some 100 picoseconds. Their findings were recently presented at the European XFEL Users’ Meeting in Hamburg, which brought together over 1,300 participants from 30 countries. ITMO.NEWS got in touch with Igor Pronin, the head of this project, who presented a plenary report on the study during the event. 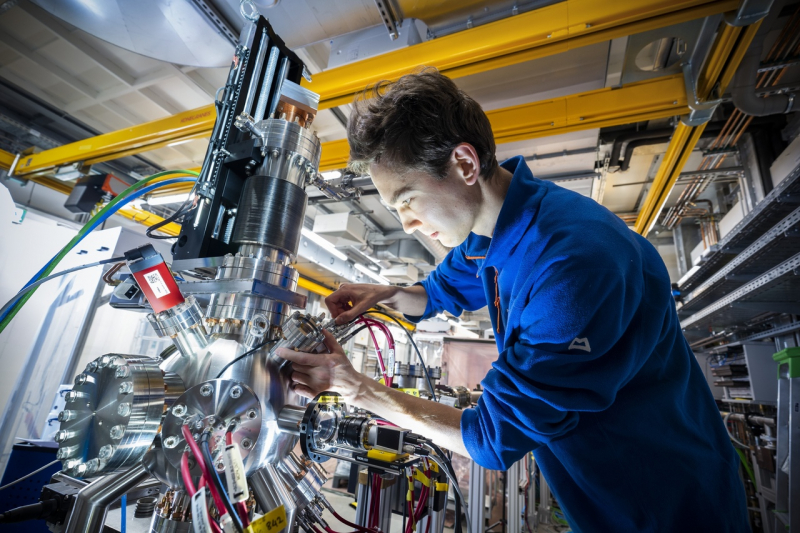 The European XFEL is one of the biggest international scientific projects of the past decades. The laser system over three kilometers in length was built in Germany, near Hamburg, over the course of seven years according to a project developed by the research center DESY. The cost of construction was over a billion euros, which is comparable to the cost of the Large Hadron Collider; over a quarter of the sum was provided by Russia. The facility opened its doors on September 1, 2017.

Teams are allotted specific times during which they can use the facility’s stations, with a schedule filled out six months in advance. Researchers from all over Europe send applications requesting access to this unique facility where they can conduct experiments in the fields of physics, chemistry, materials science, biology, medicine, and other fields. ITMO University is a member of an association that is responsible for helping Russian researchers prepare and carry out their projects at XFEL and other megascience facilities.

In November 2018, St. Petersburg researchers from ITMO University and the Ioffe Institute submitted an application for a study of the ultrafast demagnetization of ferromagnetic materials under the effects of femtosecond IR laser pulses. The project was approved and scheduled for September 2019. During the experiment, Russian researchers and their German colleagues succeeded in discovering a new phenomenon. Their findings were presented at the European XFEL Users’ Meeting in Hamburg on January 29-30, 2020.

Shooting lasers at a sandwich

European XFEL includes six research stations. The Russian researchers were given access to the Spectroscopy and Coherent Scattering (SCS) station, where they could study the interaction between soft X-rays and substances via the small-angle scattering method.

“We carried out fundamental research in order to gain a better understanding of the physics of ultrafast processes occurring within magnetic environments,” explains Igor Pronin, head of the project and a staff member of ITMO University’s UniFEL Center. “In 1996, the effect of ultrafast demagnetization of ferromagnetic material was discovered. It became apparent that if one were to strike a thin nickel plate with a short laser impulse, it would become near-instantly demagnetized, followed by a restoration of the magnetic order, during which the energy of photoexcited electrons is transferred first to the spin system, and then to the crystal lattice of the solid body. Later, researchers found that, in the case of more complex magnetic materials (ferromagnetics), singular laser pulses may not only quickly demagnetize the materials, but also reverse their polarity almost instantly. This is a gateway to the creation of ultrafast magnetic memory. However, the physics of these processes is highly complicated, and debates still rage on among writers as to the microscopic mechanics of these phenomena.”

To study ultrafast magnetic processes using an X-ray laser, the researchers would need thin-film samples in which the passing X-rays would only undergo elastic scattering in the magnetic domains. Such samples were grown on the surface of special silicon chips one square centimeter in size with 64 windows 0.5x0.5  mm2 in size, which were draped over with a thin 50 nm silicon nitride film. Alternating layers of cobalt and platinum 1 nm in thickness were then applied onto the film. The resulting “sandwich” consisted of six pairs of metal layers. Such systems possess highly peculiar magnetic structures. The magnetic moments of the domains (i.e. the fields in which the spins of electrons are oriented in a specific direction, causing a summary magnetic moment such as with a compass arrow pointing north) of the film are oriented not along the surface, but perpendicular to it. At high levels of magnification, these domains have the appearance of mazes or writhing worms. In addition, the “worms” of one color are oriented towards “north” and others – “south”. The width of these domains is merely 100 nanometers.

To understand what occurs within these domains in response to samples of laser pulses, the researchers would place the cobalt-platinum “sandwiches” into the unit and repeatedly subject them to IR laser pulses.

“The experiment employed the pump-and-probe method,” says the scientist. “First, we would excite the sample with a short pulse of the IR laser with a 800 nm wavelength, followed by a series of equally short X-ray pulses. Each of them would pass the sample and provide an image of the scattering of X-rays, which contained information about the magnetic structure of our sample during the moment when the X-ray pulse passed through it. To accumulate enough statistical data, we repeated this procedure many thousands of times. If we analyze all of the images produced for the different delays between pumping and probing, then we can watch a step-by-step (just like in movies) reconstruction of the way the sample restores its magnetic system after being demagnetized. Importantly, the use of a free-electron X-ray laser allowed us to conduct this study with an all-time high spatial and temporal resolution.”

Another crucial element of the SCS station is the world’s fastest detector, which is capable of registering up to 4,000,000 X-ray scattering images per second. In case of a sample with maze-like domains, these images appear as rings the radius of which is determined by the average size of the domain. And the bigger the ring, the smaller the domain. Over the course of the experiment, the researchers studied in detail the dependence of the rings’ brightness on the time that has passed since the IR pulse, on the pulse’s strength, on the type of laser polarization (linear or circumferential), and on the size of the magnetic field applied to the sample.

But in addition to the 100 nm-sized domains, which are typical of the sample’s equilibrium condition, the researchers hoped to observe smaller elements of the magnetic structure, which could form inside the sample after it has been pulse-heated with the IR laser. With that in mind, the distance between the sample and the detector was chosen so that, in addition to the small scattering rings, the images would also show the large scattering rings on small magnetic particles some 10 nm in size. No experiments of this nature had ever been conducted before.

“We used the magnetic X-ray scattering method not only to study the superfast demagnetization of the samples, but also to see new scattering patterns in small magnetic particles close to 10 nm in size,” says Igor Pronin. “Essentially, we strike the sample with a laser and thus heat it up quickly. As a result, the maze-like domains nearly disappear and, for the first picosecond, the detector is almost empty. Then, two to three picoseconds later, a wide X-ray scattering ring appears and, contracting in on itself, quickly implodes and disappears within some 100 picoseconds. Its brightness is proportionate to the strength of the laser pulse, and the full magnetization of our sample results in this effect disappearing. Such rings have not been observed before and, since they only exist for a very short time, we’ve dubbed this phenomenon transient magnetic scattering in ferromagnetics upon IR excitation. As for maze-like domains, they are almost fully restored within several microseconds.”

The mechanism by which this phenomenon occurs is not yet clear. Russian researchers are continuing to analyze the experimental data and have so far suggested several hypotheses on its nature.

“We may, for instance, suggest a simple model within which small fluctuations are formed on the borders of domains due to the interpenetration of photoexcited spin-polarized hot electrons. These fluctuations may be thought of as spin currents of opposing direction that flow perpendicular to the domain border. Hot electrons with positive spin penetrate the neighboring negatively magnetized domain – and vice versa. These interpenetrations result in the cross-corrugation of domain borders with an interval of some 10 nm, which ends up causing the transient magnetic scattering,” explains Pronin.

But the research doesn’t stop there. Now, the scientists will need to provide a clearer answer as to the nature of the phenomenon they’ve discovered. In addition, the group plans to work with other, more complex magnetic materials that have potential applications in modern information technologies.