On September 1st, the world’s most powerful X-Ray Laser XFEL was officially inaugurated. The set-up provides completely new insights into chemical and biological reactions and other physical processes on a nanoscale, and can even record them as “molecular movies”; thanks to this, scientists will have the opportunity to study processes that cannot be detected otherwise. Among other famous guests, ITMO’s Rector Vladimir Vasilyev and Vice-Rector for International Relations Daria Kozlova took part in the opening ceremony. 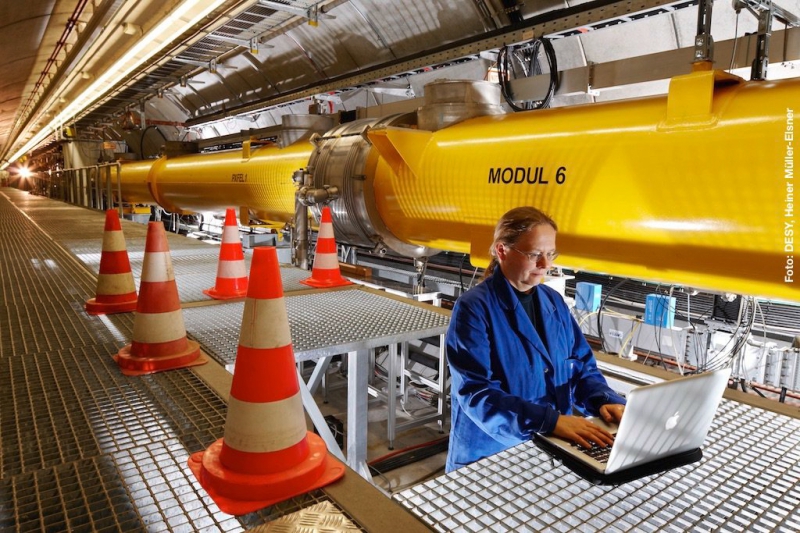 During the ceremony, the first two experiments were launched at XFEL: one was to show the new laser's application in studying rapid reactions, namely the interaction of particular molecules with a watery environment; the other was about determining the structure of a biomolecule.

Representatives of 12 countries that contributed to the construction of the new facility participated in the event; European officials who took part in the inauguration underlined that XFEL is a project aimed at developing international science and collaboration in the most relevant fields. "The ceremony was truly inspiring; Andrei Fursenko, Presidential Adviser, noted in his presentation that the whole world is now expecting new advances that we even can't imagine, as the opportunities offered by XFEL are limitless, unique and are yet to be understood in their entirety. Also, everyone noted that the project has been carried out in due time and within the specified budget. It was a great experience - to go underground into the tunnel, some 20 meters down, and see those laboratories with our own eyes. What is more, we got to very productively communicate with our German and Russian partners," comments Daria Kozlova.

The main components of the set-up that generates coherent ultra-brilliant, tunable laser pulses in the X-ray mode are the linear electron accelerator and a system of magnetic undulators that stretches along a three-and-a-half kilometer long underground tunnel. Electron beams in the ultra-conductive linear accelerator are accelerated and then routed to the undulator magnetic fields where they move along curved trajectories, emitting in the X-ray band. The resulting X-ray impulses are ultra-short and of very high intensity, much higher than that of impulses generated by synchrotron accelerators. First and foremost, X radiation has a really short wavelength, so it can be used to study objects on an atomic level, which is impossible for a common optical microscope. Secondly, XFEL's X-ray impulses will be ultra-fast, which will allow for observing ultrafast processes, for example, development of interatomic binding in chemical reactions, and recording them as videos. Thirdly, by using these impulses, scientists will get an opportunity to create and study compounds in extreme conditions like those that are present in Earth's core or inside the stars.

XFEL can be applied primarily in medicine and chemical-biological research. X radiation destroys molecules, which is why it's very hard to get information on a molecule's spatial state. XFEL's X-ray bursts will be fast enough to detect the molecule's condition before it is destroyed by creating diffraction patterns. Thus, it will allow scientists to decipher the structures of a vast number of biomolecules and biological objects, such as cells and membranes, and to study biochemical reactions in operation.

For instance, scientists are yet to study how exactly proteins assemble from linear chains of amino acid molecules. This process often goes wrong, which is a cause of many illnesses: diabetes, Alzheimer and Parkinson diseases. What is more, XFEL can be used to better study the nature of viruses, develop new technologies and materials for solar energy use, analyze the properties of different materials for creating new composites, as well as study nanomaterials in great detail. How will work at XFEL be organized

Russia's contribution to XFEL's construction is 27%, Germany's - 58%, and other participating countries contributed from 1 to 3% each. Such active participation will allow Russian scientists to influence the planning of XFEL's use, as the setup’s main resource - the time of working with the X-ray beam - will be distributed with regard to the countries' contribution to its construction.

Russian scientists will be working with XFEL under the aegis of the Mega-class Research Facilities academic association coordinated by the National Research Center Kurchatov Institute. ITMO University is part of this association, the main goal of which is to prepare projects for XFEL and other similar facilities.

As of now, leading research establishments throughout the world launch centers aimed at preparing projects for XFEL. Thus, back in 2015 ITMO university opened a new division - Transnational Scientific and Education UniFEL Center for Advanced Methods of Materials Research (UniFEL Center). For this purpose, ITMO and TU Bergakademie Freiberg entered a collaboration agreement; Russian and German scientists will collaborate on preparing materials for experiments, as well as develop joint Master's and PhD programs. In the nearest future, there'll be a contest among scientific organizations for using the new set-up's resources. ITMO University plans to apply two projects. The first is on studying the photocatalytic activity of a colloid solution of silver bi-silicate nanoparticles. Photocatalysis is about accelerating a chemical reaction due to the simultaneous effect of a particular chemical compound (the catalyst), and light. ITMO University scientists found out that iron oxidation takes place in a solution of silver bi-silicate nanoparticles, and plan to use the new X-ray laser to study the dynamical changes in the structure of this photosensitive nanomaterial.

The other project is a research of semiconductor nanowires. These nanomaterials can be used in integrated silicon optoelectronic devices; yet, to start developing application projects for nanowires, one first has to study the different physical processes that occur during their creation and modification, which can be done by using the new XFEL set-up.

"The terms of the contest aren’t known yet; most likely, the applications will be reviewed by an expert council selected by XFEL's commission, the lineup of which will be classified so as to protect them from possible pressure," comments Alexei Romanov, Head of the Transnational Scientific and Education UniFEL Center for Advanced Methods of Materials Research. This summer, ITMO University's representatives have already been to XFEL, where they acquainted themselves with the facility during a meeting organized by XFEL's Scientific Director and UniFEL Center's co-head Sergei Molodtsov. They've also discussed the prospects of future collaboration with Dr. Robert Feidenhans'l, the Chair of XFEL's board.

According to Alexei Romanov, ITMO's participation in XFEL's work is not just an opportunity for its scientists to conduct their experiments using this most powerful equipment: the university's students will also be able to participate in UniFEL Center's work and contribute to developing projects for XFEL.