Oxides of different metals often serve as photocatalysts in various systems such as air purification, reactions of water decomposition and even in the production of self-cleaning surfaces for glass and mirrors. The physical-chemical properties of such materials can be improved by adding nanoparticles, which turn an ordinary oxide into a nanomaterial with new capabilities. To successfully perform this, however, it is necessary to understand the processes going on as a nanocomposite is being formed, and to be able to control them. ITMO University researchers together with their colleagues from France and the USA have demonstrated how a femtosecond laser can be used to tune the structure and nanocomposite properties for titanium dioxide films filled with gold nanoparticles. The paper was published in ACS The Journal of Physical Chemistry C. 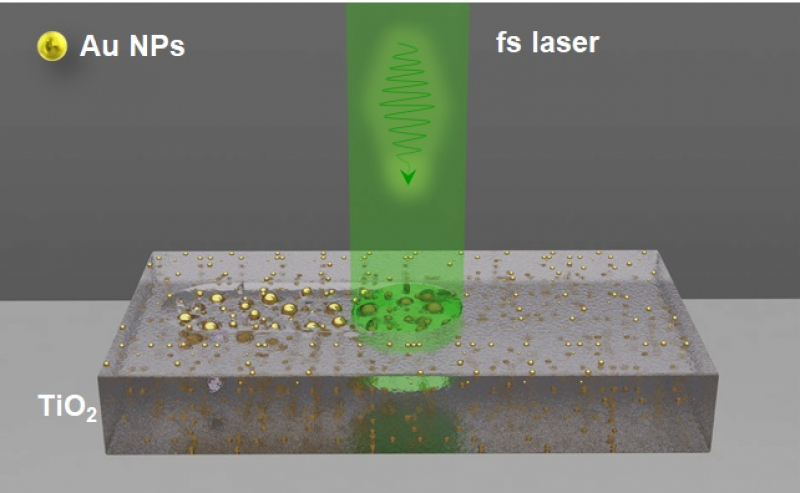 Some time ago, scientists and engineers created a number of special materials capable of accelerating chemical processes when exposed to light. This discovery has a great implications for industry – such materials can be used in a wide variety of devices, from air purifiers to fuel cells.

These materials function in the following way: electron vacancies (or spaces lacking an electron) are formed in them when they are subjected to light. This makes it possible for a chemical reaction to start. Moreover, by using this material in a nanoscale system researchers can increase the area taking part in the reaction, thus raising the catalytic activity as compared to the bulk materials due to quantum effects. One of such promising materials is titanium dioxide, which can be infused with gold nanoparticles to improve its photocatalytic properties.

In fact, fabrication of such composite materials remains challenging. Thin films of titanium dioxide and gold nanoparticles can be created separately, but the way of combination of these two components is yet to be established. There are certain difficulties with placing nanoparticles inside the oxide films, and it’s even more difficult to control their size and distribution. An international group of researchers, including those from ITMO University, has suggested using laser radiation to achieve this goal.

“If we subject these materials to laser radiation, both the gold particles and the titanium dioxide matrices around them change their properties,” explains Maksim Sergeev, a research associate at ITMO.

The researchers from ITMO University and the Hubert Curien Laboratory have carried out an experiment, where thin films of poriferous titanium dioxide were impregnated  with gold ions rapidly forming particles on the scale of a few nanometers. Then, the material was subjected to laser radiation. It turned out that with the properly chosen femtosecond laser irradiation, it is possible to effectively control the growth of nanoparticles without damaging the material.

“It’s not easy to control the size of gold nanoparticles in a semiconductor film. Together with our French colleagues we managed to find the regimes of laser radiation that change the size and distribution of gold nanoparticles while also rebuilding the morphology of the film’s surface and its optical properties. Apparently, as a result of this cavities may form around the growing nanoparticles in the film. These pores only appear at certain regimes, if the laser is moving at a very low speed,” expounds Yaroslava Andreeva, a PhD student at the Faculty of Laser Photonics and Optoelectronics.

“Together with researchers from the University of Arizona we developed a model to explain this effect that helped us to determine the temperature field in the material when it was subjected to laser radiation.. The model considered resonant absorption on metal particles, local field enhancement, photoinduced generation of unbound electrons, and photoemission. The material turned out to heat more when it contained  both smaller and larger particles, though its temperature was still not high enough to melt or destroy the material for the correctly chosen laser parameters,” elaborates Tatiana Itina,  Research Director at the Hubert Curien Laboratory of the French National Center for Scientific Research.

As a result of both experiments and simulations, the researchers can now better understand the mechanisms behind nanocomposite film formation and have more possibilities to control their properties. Using lasers for these purposes will simplify the production of such “gold-plated” titanium dioxide films, which will make it easier to implement them in the industry. Right now, however, the technology is far from being ready and additional studies are underway.