Kronstadt is a quiet green municipal town located on the Kotlin Island to the west of St. Petersburg, full of parks, gardens and boulevards. In a way, it’s a miniature St. Petersburg, with its own Gostiny Dvor, Summer Garden, Menshikov Palace, Obvodny Canal and even its own drawbridge, which makes it an ideal place to go to on a one-day trip. 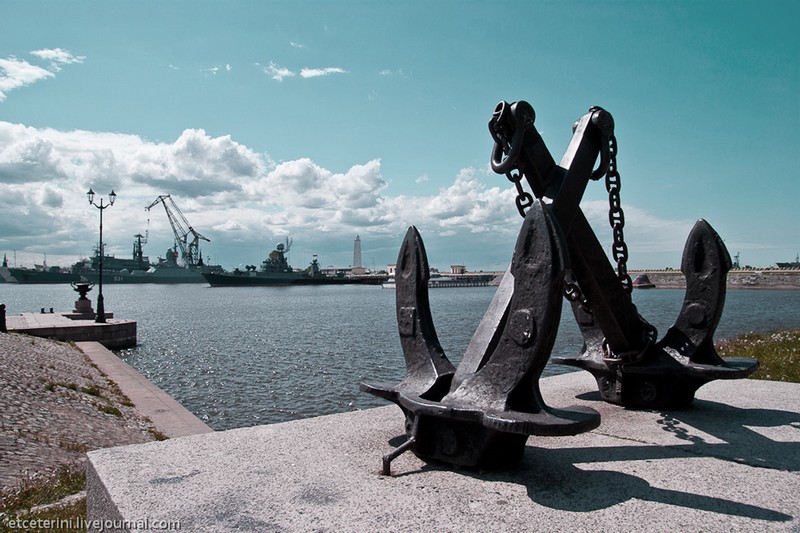 Kronstadt was founded on the 7th of May, 1704 (or 18th of May back when Russia was using the Julian calendar) of May, 1704 as the central part of fortifications built on the Gulf of Finland during the Northern war (between Russia and Sweden). The name comes from two German words — "Krone" (crown) and "Stadt" (city). There is a theory that Peter I planned on moving the capital of Russia onto this island.

Kronstadt’s history, much as the history of Saint Petersburg, is closely intertwined with Russian Navy and Russia’s naval victories.

Until 1959, Kronstadt was a separate town, so it still retains its own coat of arms, which local residents often hang in their apartments. Getting to Kronstadt is easy: by bus #101 from the "Staraya Derevnya" metro station, or by minibus ("marshrootka") #405 from "Chyornaya Rechka" or #407 from "Prospekt Prosvesheniya". The minibuses cross the whole city, so one can get off at the Gostiny Dvor and walk or go straight to the Naval Cathedral.

The road to Kronstadt goes along the dam — a complex of hydrotechnical constructions that connects the shores of the Gulf of Finland and protects Saint Petersburg from floods. On both sides of the dam one can see the old forts which were built by Peter the First during the Northern War. The historical complex is inscribed in UNESCO’s list of World Heritage Sites.

This place is of great importance to navigation in the whole of Russia, as it is a zero level of the Baltic system depths and heights. All depths and altitudes (even the heights of flight spacecraft) in Russia and some other countries (former Russian Empire) are measured from the level of Kronstadt sea gauge. If you look under the bridge, you can see a small ladder and the water level marking on the bridge’s supports. Yuri Gagarin, the first man in space, joked about it being the Hub of the Universe in 1967.

In the yellow building near the bridge there is a deep well and a mareograph — a special device for measuring the water level. Obviously, in present times they use modern digitalized data, but by tradition, they still take readings from the old mareograph every day. If you look on the other side of the Obvodny Canal, there is a small sculpture on the canal’s wall — several small fish on top of a wave. This is the monument to the Blockade Kolushka (Stickleback fish), a small fish that is generally considered inedible, but saved many people from starvation during the Blockade of Leningrad.

Another site near the mareograph building is the Italian Palace which once belonged to Peter’s close comrade, Prince Menshikov. Near the palace, there is the Italian Pond with fountains which has cannons (made in Russia at different times) which decorate the pond’s embankment.

The Petrovsky Dock is a dry dock that was founded by Peter I in 1718 and completed in 1752 — a grandiose structure at that time, meant for shipbuilding and repairs. The dock was fit with a steam engine (the first one in Russia) to pump out water from the dock, which allowed to speed up repairs greatly. When looking at the dock from the side of the Razvodniy (Dokoviy) Bridge, it’s not that impressive. To fully understand it’s scale, it’s better to look from the yards by the Kommunisticheskaya street. However, a warning: the dock is in a state of emergency, so going there can endanger your life.

The monument to Peter the First is the pride of Kronstadt. It was established by Nikolai I, celebrating the 132nd anniversary of the Poltava Battle. Peter the First is depicted at the moment of his utmost glory — with a sword in hand, standing atop his enemy’s banner.

Have a walk along the Petrovsky park and embankment, and watch the military and research ships stationed there.

Yakornaya (Anchor) Square is the center and the heart of Kronstadt. In the end of the 18th century, there was an anchor storage here, hence its name. In official documents the square had other names, like the "Square of the Revolution’s Victims", for instance, but they were used only in documents. There are many sights on the Yakornaya square, the main being the Naval Cathedral. Its full name is Naval Cathedral of Saint Nicholas in Kronstadt, and it’s the main cathedral of the Russian Navy. The cathedral was built in 1913 in neo-Byzantium style, fashioned after Constantinople’s Hagia Sophia.

During the Soviet Union, this building was used as a cinema, then a naval museum. During all these years the building gradually deteriorated, until it was fully reconstructed on its 100th anniversary in 2013.

As of now, the Naval Cathedral is restored and open for visitors.

There is also the monument to Makarov on the Yakornaya Square. Vice-Admiral Stepan Osipovich Makarov is the inventor of the mine carrier, the author of the Ship Floodability Theory, a pioneer in the usage of icebreaker ships. Makarov died during the Russo-Japanese War.

The monument was created by sculptor Leonid Sherwood in 1913. The vice-admiral is depicted pointing the way to his fleet, standing on a wave shaped as a Japanese sea-dragon.

The granite rock which is used as the foundation for the monument has an interesting history itself: it was primarily intended to be used for the monument to Pavel I, but sank during transportation and was raised from the sea a hundred years after. The rock broke in two halves; the lesser one can be seen in the Petrovsky park near the Winter Pier. The Hanging Bridge (or Makarovsky or the Red Bridge) was constructed in record time by the workers of the Shipyard in 1913. For a long period of time, it was considered unsafe by the general public due to its design, though it is absolutely safe, and is a great place to get a view of the Yakornaya square and the Petrovsky ravine.

Kronstadt’s Summer Garden, unlike his "namesake" in Saint Petersburg, hasn’t been redeveloped for a very long time, and offers an ideal place for atmospheric black-and-white photosets.

Where to eat / rest

There are many cheap and cozy restaurants and cafes in Kronstadt.

A nice family pizzeria L’Americano (13 Lenin avenue, Kronstadt, Saint-Petersburg) is located in the House of Consumer Services on the second floor. There is also a place on the first floor of this building where you can buy traditional "puishkas" (ring doughnuts) and have coffee.

Across the street, in the Gostiny Dvor, there is the Subway joint, an ice-cream parlor "33 penguins", and the "Damba" (Dam) café, which has a terrace with a nice view on the Musical Fountain.

If you walk a bit down the town’s main street, the Lenin avenue, you will see the "Kashtan" restaurant (25/2 Lenina avenue) and branch of the famous "Sever-Metropol" cake-shop with an excellent selection of pastry and cakes.

In about 2 minutes from the Naval Cathedral there are two more cake-shops — "Karavai" (33 Sovetskaya str.) and "Briosh" (1 Roshalya str.), "Bonifacio" pizzeria, where you can get not only pizza, but sushi and even a shawarma as well, and the "Big Tortoise" restaurant (29 Karl Libkneht str.), where you can enjoy the atmosphere of a pirate ship and try different delicacies.

Most of these places accept cashless payments and offer coffee to go.

Minibuses to St. Petersburg leave from the House of Consumer Services (Dom Bytovikh Uslug in Russian).