The St. Petersburg Metro, which is turning 63 years old this year, is often said to be one of the world’s most beautiful underground transit systems. Many guests and natives of the city even go on guided tours of the stations, the interiors of which reflect the turbulent history and culture of the USSR and Russia. From the newest additions to time-tested classics, here are the must-see stations to see on your visit to St. Petersburg. 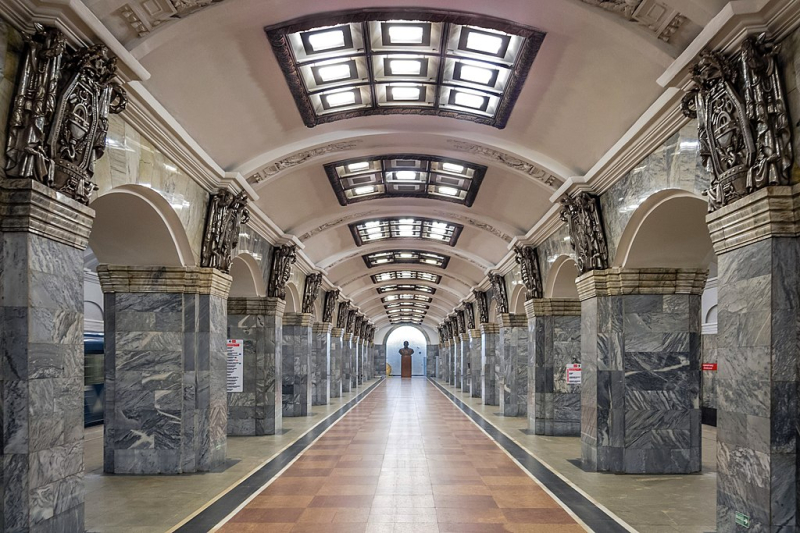 In 2018, the St. Petersburg Metro will welcome several additions, among which are the already-opened stations Novokrestovskaya and Begovaya (M3, green line). The stations opened on May 26 in preparation for the FIFA World Cup 2018, in which St. Petersburg is one of the 11 host cities. On days of the games, the metro will work on an extended schedule, closing at 2 pm on June 19 and 26, and at 3 pm on July 10.

Did you know: the initial name for the Begovaya station was Savushkina Street, named after a Soviet ace pilot who fought in WWII. This was changed during construction, but the old name still remains there in spirit; the station’s interiors are clearly inspired by the aesthetics of early 20th-century aeronautics.

Begovaya and Novokrestovslaya provide new transportation routes for inhabitants of the city’s Primorsky district, as well as easy access to the Saint-Petersburg Stadium, also known as Zenit Arena. At ground level, Novokrestovskaya also provides a great view of the Gulf of Finland and ferries arriving at the seaport of St. Petersburg.

On November 15, 1955, the first seven stations of the St. Petersburg Metro were opened, which today comprise a section of the M1 (red line) between Ploshchad Vosstaniya and Avtovo. These two stations, incidentally, are probably the most well-known: the former is located in the heart of the city and exits to both Nevsky Prospekt and the Moskovsky railway station, and the latter is said to be one of the world’s most beautiful underground stations. The Independent recently noted that “Russia’s former capital has a living work of art in the shape of the Metro.”

For a trip to the past, visit the Kirovsky Zavod station on M1. Located near the famed machinery plant, its interiors are an insight into the aesthetics of post-WWII USSR. Intricate reliefs pay tribute to the four segments of the Soviet heavy industry: electrical, oil, mining, and metal, and a massive bust of Vladimir Lenin stands at the far end of the platform.

Did you know: the St. Petersburg Metro is the world’s deepest underground system by the average depth of its stations. The deepest station in St. Petersburg is Admiralteyskaya, located 86 meters (282 feet) below ground level. And no, the stations are not so deep because of having to dig below permafrost; that’s just an urban legend.

It’s not only modern history and industry that are paid tribute in St. Petersburg’s metro stations. Among several stations inspired by Russian culture and arts is one renowned for its interiors: Pushkinskaya, also on M1, named after famed Russian poet Alexander Pushkin. The station, which neighbors the Vitebsky railway station, is lushly decorated above and below ground and features a statue of Pushkin himself as the centerpiece of the underground platform.

Named after bombastic Soviet poet and playwright Vladimir Mayakovsky, the Mayakovskaya station on M1 has probably the most striking and memorable design of all; in contrast to the rich interiors of Ploshchad Vosstaniya, to which it provides a transfer, Mayakovskaya is decorated in a minimalist style, its walls lined in red mosaic along with a portrait of the poet and choice quotes from his works.

The bridges are drawn and you’re stuck on Vasilevsky Island (or can’t get to it)? We’ve all been there. Until very recently, this was a very real issue for many in St. Petersburg, especially during the White Nights. Thankfully, Sportivnaya station on the M5 (purple line) is now the only station in the city with a travelator, or moving walkway, which takes passengers through a 300-meter tunnel under the Neva river, connecting the Petrogradsky and Vasilevsky islands. In the summer, and especially on the weekends, Sportivnaya is often working all night long, serving as the only connection.

Did you know: the St. Petersburg Metro pioneered several construction methods common in today’s underground transit systems. In 1975, Politekhnicheskaya and Ploshchad Muzhestva were the world’s first single-vault stations, and in 1961, Park Pobedy was the world’s first metro station to feature platform screen doors.

These are some of the St. Petersburg Metro’s most remarkable and iconic stations. However, there are many more beautiful and notable spots in the metro, so feel free to explore further, and perhaps you’ll find a favorite station of your own! Read our previous article about public transport to learn how to buy tokens and passes. To get around, use the metro’s official interactive planner, the Yandex.Metro mobile app (Google Play/App Store), or the computer terminals located on the platform at each station. On regular days, stations open at approx. 5:30 am and close at approx. 0:30 am. A more precise schedule for each station can be found here.