St. Petersburg is indeed a city of surprises. Having always existed on the verge of novelty and tradition, it never ceases to amaze those ready to look past its commonplace attractions. Oftentimes, it only takes a single step away from your regular tourist track to find wonders much different from its well-advertised treasures. Annenkirche, a historic Lutheran church on Kirochnaya Ulitsa, is one such place: misleadingly plain on the outside, it offers a truly unique experience that you will never forget. 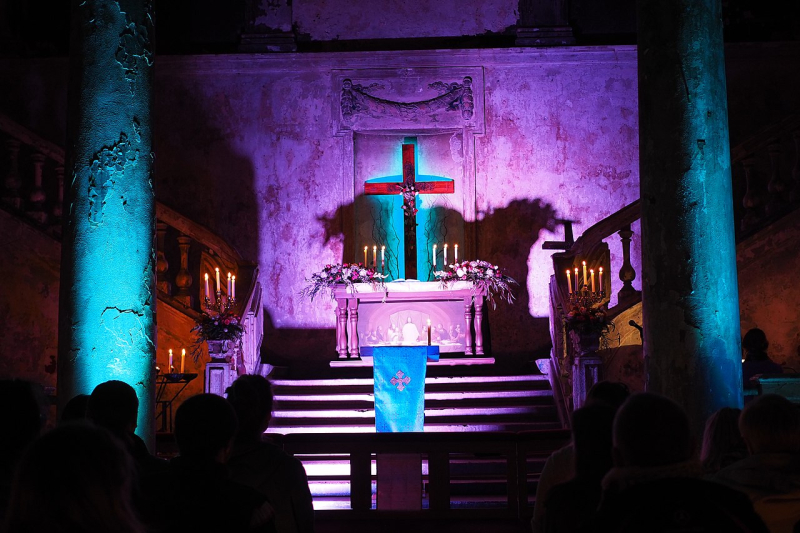 In fact, it was by pure chance that I stumbled upon this wonderful place. I did hear stories about  a “burned out, almost derelict church in the city center” from some of my friends, but I just couldn’t see it in a modest, neatly painted building that I regularly passed by. Being a non-religious person, I would have never come there if not for a quirk of mine: I still like to enjoy the calm, sublime atmosphere of the St. Petersburg’s smaller temples, which I believe to be a great way to get away from the city hustle.

I still remember my surprise as I first entered Annenkirche: the charred, ruined interior, the high ceiling with burn marks, and the cool, murky air that seemed so different from the heat outdoors. What startled me the most was that there seemed to be no one there; only a table stacked with spiritual literature and an alms-box indicated that the place was still running. It was later that I learned some of Annenkirche’s history; at that time, I just couldn’t get rid of the feeling that I had trespassed into some different, bizarre reality. Having taken the wide, double-return stairs, I made my way up to the gallery. From up there, I could see the main hall that hosted a contemporary art exhibition; few visitors silently moved amidst grotesque constructivist installations. Despite my disdain for selfies and people posting photos of just every moment of their lives, I hardly restrained myself from pulling out my smartphone; in some twenty minutes, still in a daze, I made my way out with a strong intention to learn more about this place.

The story behind the 18th-century building turned out to be a bit more plain than I expected. Originally a Lutheran temple, it became a cinema hall during Soviet times, and almost became a nightclub in the early 00’s. In 2002, shortly after it was returned to the Church of Ingria, a fire ravaged the building, which was then left unattended until the beginning of its reconstruction in 2010. Therefore, its unique interior has a most simple explanation. What is more interesting is that being an operating church, it regularly hosts different cultural events like concerts, plays, and art exhibitions.

While a church hosting cultural activities is nothing new, Annenkirche has taken this idea a step further. Quite a few Lutheran temples in St. Petersburg offer free classical concerts; this place, however, seems to welcome all kinds of different artists: jazz bands, piano soloists, or a modern theatre troupe – you never know what you’ll see next. The church’s half-ruined state provides for a most atmospheric setting, and at every event, the building itself is yet another wondrous exhibit that you’ll never get tired of.

Another thing that I really like about Annenkirche is what I’d call its outlook. Even though it regularly hosts services (services in English take place at 9:30am on Sundays), I don’t remember ever being preached to, or anyone trying to get me involved in whatever was happening. The place welcomes religious and non-religious people alike, as long as they treat it with similar respect. Even its Internet presence is kept to a minimum: it doesn’t have a flashy website, only a VK page where one can follow the upcoming events. In a sense, I even feel uneasy about writing this article, as if I feel a little jealous towards any new visitor who will now discover this hidden gem.