Like any major city, St. Petersburg has official districts as well as “vernacular” areas that are special to the locals. There’s the Center, Vasilievsky Island, and Petrogradka, just to name a few. In this series of stories, we’ll highlight some of our favorites so you, too, can experience the city like a local. We start with Moskovsky Prospect, the main way to get downtown from the airport, and also a block-by-block trip through time and culture. 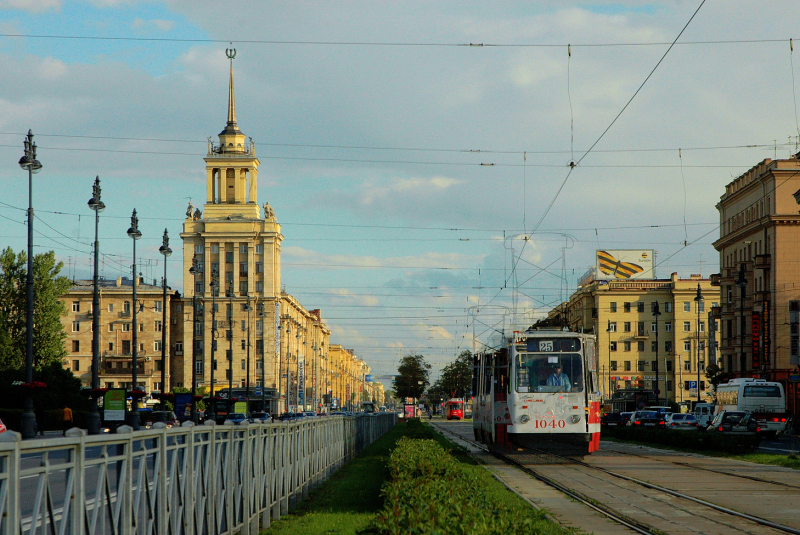 Every time I land at Pulkovo Airport, my dad asks if we want to take the scenic route or the fast route. I always vote for the scenic, which will take us along Moskovsky Prospect all the way downtown. If it’s Christmas, the Prospect will be decked out with decorations. If it’s spring, there will be flowers everywhere. In the summer people will be drinking coffee in outdoor cafes. In the fall, leaves will twirl around the passing trams. In the twenty minutes it takes to travel its length, I’ll get my dose of everything that’s important to St. Petersburg – the history, the triumphs, the elegance, the spirit.

Visually a straight line between the Peter and Paul Fortress and the Pulkovo Observatory, the Prospect has always played an important role in the city’s life. Once part of the highway to Moscow, hence the name, it starts at Sennaya Square, the market square for two centuries, and runs south for about 10 km. In the 19th century, Russian royalty used it to get to their summer residence. During World War II, troops marched here to get to the frontline.

The Monument to the Heroic Defenders of Leningard will be the first thing you’ll see on Moskovsky Prospect if you’re traveling from the airport. It’s the focal point of Ploshchad Pobedy (Victory Square), built in the 1970s to commemorate the heroic efforts of the city’s residents and soldiers during the Siege of Leningrad. The works by sculptor Anikushin capture the raw emotion of war. There’s a museum inside. The events of WWII have very much shaped the subsequent generations of Russians, so it’s only fitting that this monument is the first to welcome the city’s visitors.

As you travel north, you’ll also travel back in time. The architecture around you will change to the grandiose construction of the Stalin era, who at one point had a plan to move the city’s administrative center here, away from the floods and the tsarist past. The houses are substantial and imposing. The streets are wide and full of greenery.

The crowning jewel here is the House of Soviets, a monolithic office building decorated with friezes depicting muscular Soviet workers. In front of it stands an enormous statue of Lenin. He was probably envisioned as delivering an inspiring speech, but the locals all say he’s dancing.

A few blocks further, and you’ll be passing the Voskresensky Novodevichy Convent, the first Orthodox convent in St. Petersburg. It’s hard to imagine how the two institutions could be further away from each other in ideology and yet here they are on the same avenue. It is a functioning convent, and anyone can attend a service in the cathedral here. It also has a school, and every time we drive by, I can’t help but think what it would be like for my son to be a student there.

You can almost hear horns tooting the imperial past at the Moscow Triumphal Gate, another major monument as we travel deeper into the city. Once the largest cast-iron structure in the world, it was erected to commemorate the Russian victory in the Russo-Turkish War of 1828-1829.

A little further north, and before you cross Obvodny Canal, the grandeur gives way to the 19th-century “grey belt” – industrial areas criss-crossed with railroad tracks. Think functioning as well as half-abandoned manufacturing plants that once powered the industrial growth and the sentiment for the Soviet revolution, a sort of buffer between the architectural wonder of the downtown and the general living areas.

On the other side of the Canal, you dive right into college life with universities on both sides, anchored by St. Petersburg State Institute of Technology, the Baltic State Technical University, and the Mendeleev Institute for Metrology, which once bore the name Main Chamber of Weights and Measures of the Russian Empire.

Cross the Fontanka River, and you’re in the very heart of St. Petersburg, at the starting point of Moskovsky Prospect at Sennaya Ploshchad. Around here you can follow the footsteps of Dostoyevsky’s literary characters or visit a couple of ITMO’s campuses, for that matter. You’ve arrived, or maybe your adventure is just getting started!

Want to explore more of St. Petersburg between classes? Check out our Steps Away series.