One of the most remarkable carbon-based nanomaterials are luminescent carbon dots, the physical and chemical properties of which are easy to control. Thanks to their low toxicity, these particles are said to possess great potential in the fields of biology and medicine. Carbon dots are made from organic substances; if their precursor contains a chiral center, the resulting nanoparticles will be chiral, too. These particles have various application prospects, including in medical diagnostics. Researchers from ITMO University and St. Petersburg State University, in collaboration with their international colleagues, have developed a new way to synthesize such nanoparticles with stable optical properties. 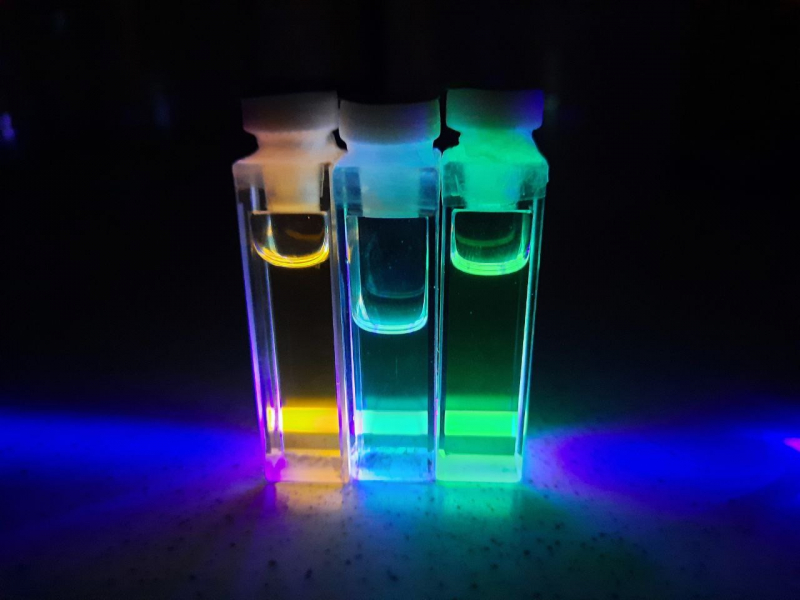 Biomedical progress is largely dependent on production technologies, including novel approaches to the manufacturing and study of nanoparticles. Out of all nanoparticle types available today, carbon dots are the perfect candidates for biological and medical applications. They possess a unique combination of qualities: they are biocompatible, easy to produce, and the positioning of their absorption and emission bands can be changed in a wide spectral range.

Chirality refers to an object’s incompatibility with its mirror copy under any combination of rotations or translations in three-dimensional space. It is an important quality of biological substances such as DNA, RNA, and protein-making amino acids.

Researchers from ITMO University have synthesized chiral carbon nanodots from citric acid and ethylenediamine with L-enantiomers of various amino acids using the hydrothermal method. The resulting nanoparticles exhibited high photoluminescence with a quantum yield of up to 57%. The intensity and position of such particles’ emission bands is practically non-dependent on neither the properties of the medium (the pH and polarity of the solvent) nor the length of their exposure to UV light.

The scientists note that the synthesized nanoparticles also exhibit two-photon absorption. This allows researchers to choose the source of photoluminescence excitation in the long-wave region of the spectrum during biovisualization. Decreasing the excitation photon energy – in other words, shifting its band from the visible range into the infrared – makes the use of such nanoparticles helpful in reducing the autoluminescence signal of the tissues and cells. This improves the accuracy of the method, making it possible to produce higher-quality layer-by-layer images of biological tissue under in vivo conditions.

“In order to produce such bright nanoparticles, we optimized the synthesis parameters: temperature, molecular ratios of precursors, and reaction time. Synthesized chiral nanoparticles hold great potential for biomedicine, as they open up opportunities for selective interaction with biological objects. At the same time, it’s important to ensure that they have a high photoluminescence quantum yield so that the signal/noise ratio can be increased when visualizing tissue,” explains Elena Ushakova, one of the authors of the study, a lead researcher at the International Research and Educational Center for Physics of Nanostructures, and the head of the Laboratory of Light-Emitting Carbon Quantum Nanostructures at ITMO University.

As part of their research, the scientists modeled an energy structure using the DFT (density-functional theory) method and demonstrated that optical chirality of carbon nanoparticles may be caused by the presence of amino acid molecular groups as well as the anisotropic structure of the nanoparticles in question, meaning that optical signals can be produced by modifying the morphology of a nanoparticle.

The researchers now plan to study ways of producing chiral nanoparticles with optical transitions in the red and near-IR regions of the spectrum. This discovery may pave the way for a tool capable of detecting DNA defects, diagnosing oncological diseases, and delivering drugs to afflicted cells.

This research received support through ITMO University’s 2030 Development Strategy and from the Russian Science Foundation.