Scientists from ITMO University, St. Petersburg State University, TU Dresden, Ioffe Institute, and City University of Hong Kong have devised water-soluble carbon nanodots that demonstrate efficient luminescence in the long wavelength spectral region. The researchers also managed to achieve the highest possible photoluminescence quantum yield reported so far for carbon nanodots emitting in the near-infrared spectral region. The developed nanoparticles can be used as non-toxic fluorescent probes for bioimaging. Read on to learn more about the study and its findings. 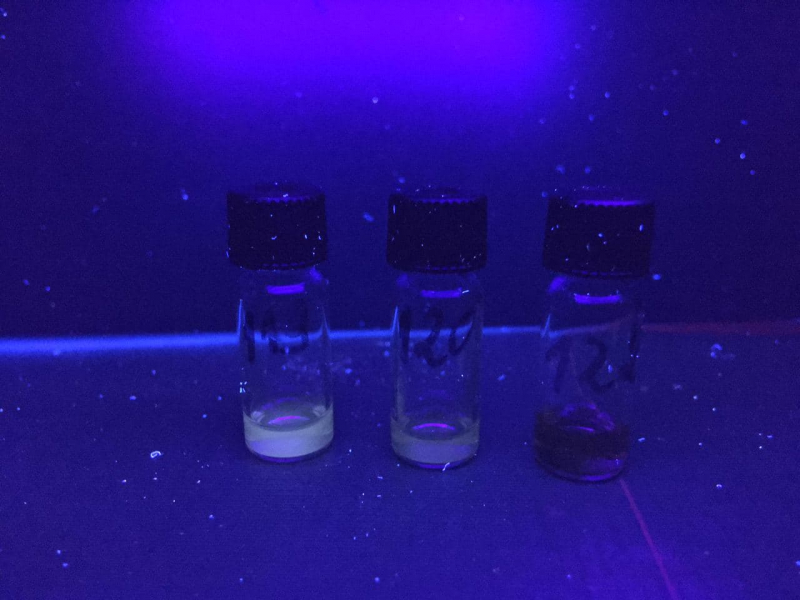 The samples of carbon dots that were synthesized using the IR1061 dye and different firing temperatures. The image is taken in ultraviolet light. Photo by the research team

Nanoparticles and their synthesis

Carbon dots were discovered in 2004 around the same time as graphene was first synthetically derived. The luminescent properties of the novel nanomaterial immediately caught the attention of the scientific community since they were quite unusual for carbon nanomaterials – in particular for carbon tubes and graphene.

Researchers continue to explore carbon dots and experiment with new synthesis techniques. Compared to other luminophores (e.g. semiconductor quantum dots), they are eco-friendly and more affordable because they can be obtained using almost anything, be it fruit juices, citric acid, leaves of plants, or any other organic materials.

Carbon dots are also biocompatible, which opens up plenty of opportunities for their use in medicine. For example, they can serve as biosensors, luminescent markings, or probes for targeted drug delivery. However, most living tissues and cells have optical windows at the red end of the spectrum, and carbon dots show emission in the blue to green-light regions. The synthesis of carbon dots in other color areas (red primarily) poses particular challenges due to the very low fluorescence intensity in this region.

Since 2018, ITMO University has been studying light-emitting carbon quantum nanostructures. The research is carried out at the Laboratory of Light-Emitting Carbon Quantum Nanostructures, which was established within the megagrant project and supported by Prof. ‪Andrey Rogach from City University of Hong Kong. The researchers have studied the properties of carbon dots, their inner structure, and luminescence properties. One of the lab’s objectives was to develop nanoparticles emitting in the infrared spectral range, which makes them promising for medical applications.

“Light emission in the near-infrared region (from 700 to 1,100 nm) is referred to as the optical window in biological tissue. Such materials are widely used as luminescent nanoprobes for bioimaging since they help reduce the signal-to-noise ratio and obtain higher contrast images. Although carbon nanoparticles are non-toxic and biocompatible, they are not efficient in producing emission in the near-infrared range. Hence, science is still in pursuit of new approaches and synthesis techniques,” explains Evgeniia Stepanidenko, an author of the paper.

The research team was able to synthesize carbon dots with an emission peaking at 1,085 nm and photoluminescence quantum yield of 0.28%, which is the highest possible value for carbon dots in this spectral range. All this was made possible through a specially created synthesis method proposed by researchers at Ioffe Institute.

The proposed method was developed using organic dyes. By placing them in the pores of silica microspheres and exposing them to a high temperature, the scientists managed to create monodisperse nanoparticles with preserved emissive centers. The use of various dyes and precursors makes it possible to produce carbon nanoparticles with a wide spectral response range that can be applied in both medicine and photonics. Moreover, this method does not require further processing, which makes experiments easier to conduct. What’s more, the synthesized materials are water soluble and thereby are promising for bio-related fields.

As noted by the scientists, the new synthesis enables far greater control over the properties of nanoparticles by, for instance, modifying their qualitative characteristics (the size, the range, or the light intensity):

“Our team conducted a comprehensive study of the morphological and optical features of the nanoparticles obtained. We managed to establish the relationships between these properties, identify the effect of temperature on the sizes and occurring optic transitions inside nanoparticles, determine the synthesis stages, and set optimal parameters for the synthesis of such nanoparticles. Using our method, scientists will be able to adjust parameters to produce nanoparticles with desired properties and sizes depending on their further applications,” concludes Evgeniia Stepanidenko.

The research team now operates within the Functionalized Carbon Nanoparticles project, one of the winners of last year’s open call for projects held as part of ITMO’s 2030 Development Strategy. The scientists plan to further examine the formation of nanoparticles and the nature of their light emission. Advances in this field will allow researchers to predict the properties of carbon nanoparticles synthesized from novel precursors and develop particles for specific purposes, such as the production of solar cells, LEDs, sensors and fluorescent tags, inks and much more.