ITMO University is happy to announce the results of the open call for projects held as part of the 2030 Development Strategy. All in all, the university received 141 applications in four categories. Out of 57 projects approved for open defense, 36 have been chosen by the expert board as the winners. 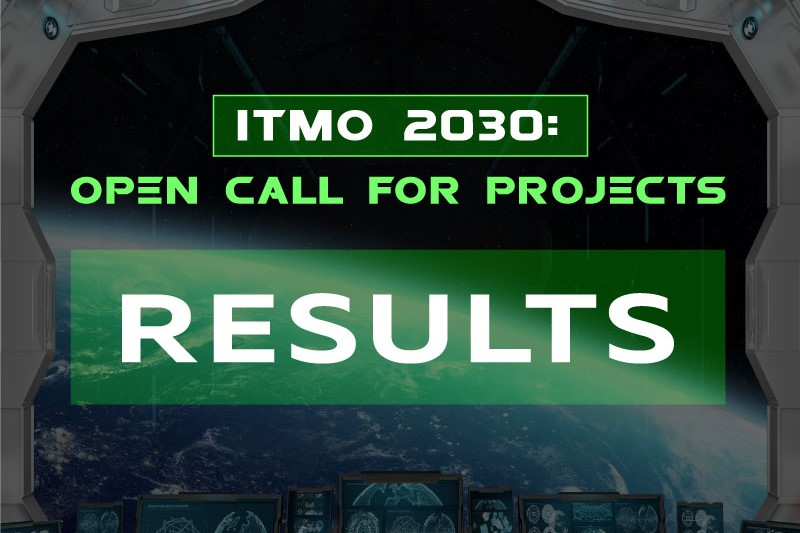 The second category was the most popular with a total of 60 applications. The most popular subcategories were Digital Transformation of Higher Education, Well-Being and Open-Source University, as well as Business Environment and Culture. Among the top M-platforms were Next-Gen Cyberphysical Systems and Human.Nature.Technology, which received 20 and 17 applications, respectively. Importantly, 20 projects were submitted by ITMO students and 13 by outside teams and the university’s partners.

As emphasized by Alexey Slobozhanyuk, the curator of the open calls focused on frontier laboratories and the PI Group initiative, the two categories received a strong response from participants due to, among other things, the high standards of the competition. The participants had to not only demonstrate their research experience, but also gain the support of world-class experts. All projects were reviewed by outside experts and leading specialists (the average h-index is 56) from Europe, Asia, and the US.

“We got applications from worthy specialists in chemistry, physics, and new materials. And what’s more, there were both fundamental and applied studies. On the one hand, we had Maxim Gorlach, who plans to create special metamaterial-based structures to detect dark matter, and on the other – Sergey Makarov with an idea of building a previously non-existent class of lasers. All these projects hold great promises for the future,” says Alexey Slobozhanyuk.

“My favorites were projects for the PI Group initiative which, in my opinion, go straight in line with our Development Strategy. I’m glad that we had no strict KPIs for each and every track. As a result, we welcomed new results and ideas,” shares Daria Kozlova, ITMO’s First Vice Rector and head of ITMO’s 2030 Development Strategy.

Summing up the results of the contest, Daria Kozlova noted that despite the time constraints, participants demonstrated a high degree of competency and, most importantly, were fully aligned with the spirit of ITMO University.

“We’ve undoubtedly upgraded our skills in preparing and running open calls. As the head of ITMO’s 2030 Development Strategy, I would have liked an even bigger “jump” into the new, but the academic community is, as usual, partial to slightly more “sensible,” conservative ideas – but always ones that bring results. There were some brilliant and creative ideas but there were also projects that required more work. We will provide feedback to each and every participant so that they could perfect their project for the next competition in 2022.

“I’m an optimist and a true fan of ITMO University, and I am sure that our hyperjump is going to happen. It could definitely happen with Maxim Gorlach’s project on dark matter, but there are others, such as our bioinformatics and infochemists specialists, or the team of Sergey Makarov and Ivan Iorsh, who could also make a huge impact. On another note, Daria Nedorezova’s project on gene therapy for cancer treatment deserves special mention. That’s exactly the kind of young science we spoke about at Sirius the other day that should be given space and supported,” says Daria Kozlova.

The first progress reviews will be conducted in June. The experts plan to base their assessment not on reports and presentations, but real results observed on-site. Participants whose projects failed to meet the open call’s criteria but showed potential will have a chance to apply again next year or have the projects implemented by the university following necessary adjustments.

ITMO.NEWS talked to the winners to learn more about their projects and what the competition gave them.

Andrey Bogdanov, a winner of the open call for PI Group projects

Project: Nanophotonics as a Speedrun from Pupils to Advanced Researchers

After I had studied the requirements, there was no question in my mind whether I should apply for the open call. The PI category seemed like the right fit for me. Unlike the vast majority of grant contests, this track does not purport to solve specific scientific problems and obtain certain results. First and foremost, it aims to develop scientific teams and educate aspiring scientists and research leaders. That is, school and university students come first! In this case, they acquire new knowledge and skills by tackling scientific challenges, collaborating with international colleagues, teaching, conducting projects, and participating in academic mobility.

The goal of our project is to train professionals who would be able to form their own scientific teams in the next three to five years to carry out cutting-edge research. The training will be conducted through a series of applied tasks: participants will face complex scientific challenges, take part in international scientific projects and conferences, as well as undertake various internships. The research part of our project focuses on the use of high-quality nanoresonators and metasurfaces in solving the problems of nonlinear optics and biosensorics.

Antonina Puchkovskaia, head of the Arts and Sciences M-platform and a winner of the open call for M-platform projects

Project: WUNDERKAMMER: Preservation and Representation of the Legacy of the Peter the Great in Digital Space

I believe that both the open calls and the national program Priority 2030 are an excellent opportunity for young specialists to demonstrate their achievements, pitch their ideas, and obtain the needed financing. For instance, the Arts and Sciences M-platform received seven applications, four of which were selected for the final round. All participants suggested ideas for developing ITMO University’s newer scientific fields, be it digital humanities, art & science, digital literacy or robotic art.

The project I am currently running is implemented by teams from ITMO University and Peterhof State Museum Reserve. Devoted to the 350th anniversary of Peter the Great, it aims to launch an informational and educational platform about the first Russian emperor. Apart from the museum in Peterhof, 114 other regional museums dedicated to similar topics will join the project.

Elena Ushakova, a winner of the open call for PI Group projects

I decided to take part in the competition because I had a team that was a perfect match for the contest’s requirements. It was my chance to turn my ideas into an actual project.

I recently joined a working group. During one of our discussions, we spoke about the role of principal investigators at ITMO University. It seems to me that there’s potential in offering such positions to young scientists. Hopefully, we, scientists and group leaders, will start to communicate and exchange our best practices more, and as a result, we will soon launch a PI school together.

Such initiatives inspire and foster a productive environment since it is always much nicer to work with people who aspire for more and work for common good. When the university supports the ideas of its employees, it helps the university become better.

Daria Chirva, a winner of the open call for projects focused on Development Strategy goals

Project: ITMO Minor Programs as a Way to Advance Your Career

I was most impressed by the scale of the tasks facing potential participants. Today, most people simply do not have enough time to do everything they would like to do. With that in mind, I started to think about creating a special system for students that would allow them to acquire competencies of Master’s programs in-person and remotely. This way, they could start to take actions for the future now, while they are still in search of their perfect laboratory and program. It would be great to let highly motivated students to study next-level skills beforehand so that they’d have more time for personal projects once they’ve started their Master’s and formed a clear career plan.

ITMO is, indeed, a university brimming with opportunities. My team took this contest as a creative challenge. We already know which project we are going to present in fall. And we are not the only ones. I am glad that our university lets staff have a say on its development strategies and approaches. It inspires and motivates others. The future is up to us.

Oleg Borisov, a winner of the open call for M-platform projects

We’re using new mathematical approaches to create next-gen technologies of embodied intelligence in robotics. Such technologies would help researchers to get robots out of laboratories, from predetermined to unstructured environments, and obtain solutions for such industry issues as automated inspection, robot logistics, and robofacturing.

I was most drawn by the contest’s scale, as well as its unconventional format and approach to application reviewing. The application process included several highly competitive stages. Participants had to not just build a strong application but also present their projects to experts publicly. I think that it is meant to make the process as transparent as possible and also foster responsibility for results.

Such competitions are a great way to focus on your ambitious goals, meet like-minded people, get your ideas off the ground, and develop yourself, your team, and your university as a whole. It makes participants feel that they make a difference when universities support their initiatives.

A complete list of the contest winners and information about ITMO’s 2030 Development Strategy can be found on the official website.