What will ITMO University be like in ten years? And what about the whole world – education and science in particular? What kind of breakthroughs are we to expect? The university's experts presented its new 2030 Development Strategy during a session of ITMO's Academic Council at Sevkabel Port. 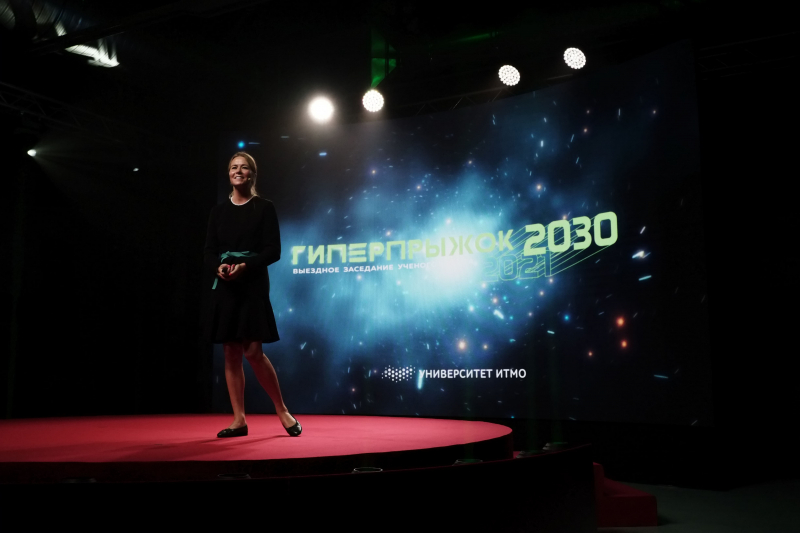 A journey into the future

The latest session of the Academic Council took the form of a journey into the future: from 2021 to 2030. First, visitors were taken into the ITMO.MEDIA area, where they could learn about the university’s latest achievements and then enjoy a peek into its plans for 2030. This futuristic atmosphere was complemented by AI assistants and futuristic treats.

The format of the event, too, took on a new shape. This time, the speakers – ITMO’s First Vice Rector Daria Kozlova and heads of the strategic projects – presented the main aspects of the program through seven-minute TED-style talks.

“The main idea we’re trying to convey is that everything is in our own hands. If we want to create the university of the future that is not like any other university and we have it stated in our Development Strategy, we will be the ones to make this possible. This Strategy is the result of our common effort, a product of the soul of our university – we’re just the ones to put it into words. That’s why I am calling on everyone to get involved. We don’t expect the Strategy to be implemented only by university administration and a couple of strong research groups. It’s important that every staff member and student gets involved. And it’s vital that students know their part in the strategy. I am absolutely sure that our stakes should be on them, because they are students today and faculty members tomorrow. They will be working at the speed that ITMO needs,” says Daria Kozlova.

The strategy features four key projects. One of them, ITMO.Impact, aims to create an open and accessible technological and educational environment in the university and beyond. For instance, one of the plans is to create joint laboratories with IT and innovation leaders, develop urban ecosystems, and participate in digitalization of city services.

An equally important area of development is the openness of the university’s educational system to the widest possible audience and strong connections to ITMO’s alumni as well as students of other universities. This field includes the development of continuing professional development programs, organization of popular science events, and collaboration with other universities.

“This is a new project for ITMO and it aims to not just build up the university’s reputation, but mainly increase our contribution to society in general. And our main task is to establish communication with the public – with young people and students, so that they get involved in this project. We expect a specific contribution from them and are planning to develop the particular activities together,” says Vladislav Bougrov, head of the Institute of Advanced Data Transfer Systems and head of ITMO.Impact.

The second strategic project, Scientific Breakthrough, focuses on reorienting the university’s research activity from publication-targeted and theoretical to innovation- and project-based. The results of this activity not only have to constitute scientific breakthroughs but also be in demand in society.

“I want to bring your attention to three main tasks. First, we need to shift our focus from the number of mediocre articles to the quality of obtained research results. People often focus on their publications and forget that they do science and articles are only indirect indicators, while the main things are breakthrough results. Second, we have to make sure that the results we produce are in demand in society. So that we don’t just busy ourselves with experiments and theoretical concepts, but make our IPs available to the public. Third, we need to attract and grow the best researchers, so that we can tackle the first two tasks,” comments Alexey Slobozhanyuk, dean of the Faculty of Engineering Research and head of the project.

Highly Personalized Value-Based Education, the third strategic project, will train specialists who will fit right into the new reality. Olga Eliseeva, head of ITMO’s Department of Educational Quality Assurance and head of the project, underlines that currently universities have to compete not only among themselves, but also with other educational platforms. That’s why ITMO has to reshape the educational process to meet the demands of students and the labor market.

It means a completely new approach to educational programs – the so-called jigsaw education, where students themselves choose the modules and courses, as well as the format and speed they want to study them at. Moreover, students can also choose to complete their thesis in different forms, including startups, art projects, scientific publications, code, and others.

“We have already reached some of the highest standards: talented students, first-class lecturers, and innovative approaches to education. But we have to find new approaches to education in the world that experiences rapid changes. Today it’s hard to predict the position on which you would enter the labor market even in two years, to say nothing of four (the time it takes to get a Bachelor’s degree in Russia – Ed.). So there is the question of who we are training. Our answer is that we’re educating a new generation that will be able to adapt to the changing world and learn something new quickly. At the same time, we need to create a selection of educational products that will meet student demands as well as high quality standards,” adds Olga Eliseeva.

Well-Being, the fourth project, was created to make studies not only relevant and intensive, but also comfortable (and ideally – happy). This project aims to create the most convenient environment for work and studies for ITMO’s staff and students.

“When we only came up with the project, we played with the idea that happy people are more productive and engaged in their work and studies. That’s why ITMO’s Well-Being project is based on such core components as mental and physical health, sports, professional development, social connections and communication, conscious consumption, and a comfortable environment. Various well-being programs are mostly adopted in major companies, such as Google and Yandex, but I don’t know of any such full-scale program at a university. We are already developing in this field with a focus on sports, healthcare, mental health, convenient coworking spaces, and infrastructure for students. But those used to be separate steps, whereas now we want it to become a single program. This will allow us to create and develop new services for our students and staff,” says Evgeny Raskin, head of the Department of Youth Policy and head of the project.

All of the introduced changes demand a major transformation of the university structure – at ITMO it will manifest itself in M-platforms presented by Sergey Kolyubin, a professor at ITMO’s Faculty of Control Systems and Robotics. The concept is based on platform economics that is the core principle behind the majority of contemporary technological companies.

“The new environment we’re creating inside ITMO demands a new type of organization system that will drive the implementation of our projects. This system goes beyond the university, involving our partners. This step will allow us to go beyond the market of science and education that we know and understand and expand into promising new fields, such as high tech markets. Those are the fields that simply cannot develop without universities – both in terms of research and engaged specialists,” concludes Sergey Kolyubin.