On June 18, ITMO students and staff, as well as their families and friends, gathered for ITMO Family Day – the university’s first-ever open-air festival in Kirov Central Park! The entertainment program included comedy, sports, and creative workshops – culminating in a performance by a special musical guest that even rain couldn’t spoil. Here’s how it went. 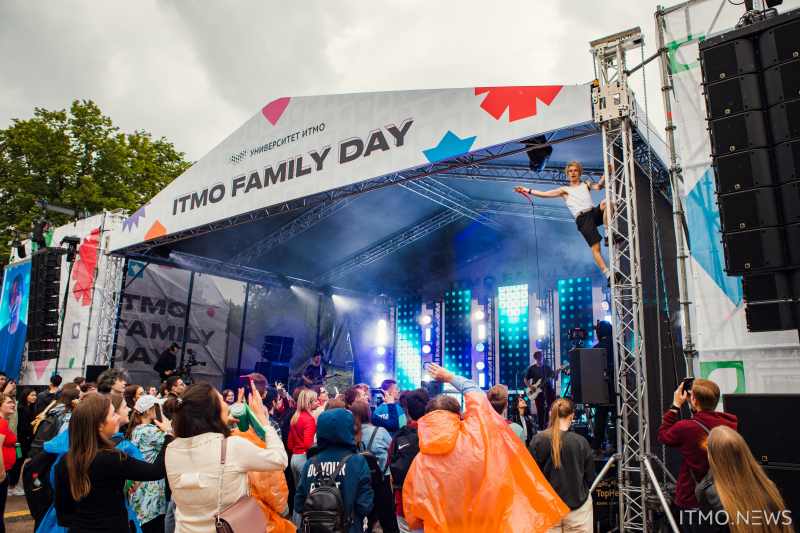 The festival was inspired by be ITMO – the philosophy that guides the university in fostering a welcoming environment and supporting the comprehensive development of all members of ITMO.Family. To promote these ideas, the festival’s team set up six thematic zones.

But that’s not all! There were five more specialized zones: Interactive Area, Experimental Spot, ITMO.Extreme, Kids, and Stage.

Even though ITMO Family Day was held for the first time, she notes that the event managed to bring together around 2,500 participants (not counting the volunteers and organizers).

Keep learning with be ITMO

The organizers of each zone prepared even more fun activities for the guests.

Attendees also gathered around the "sound tree," where each branch tells a different story – from a cat purring to someone rejoicing in their paycheck...

… and made mementos out of recycled bottle caps.

They could also test their agility by riding a mechanical bull – and strength by joining an armwrestling competition.

Those into more relaxing sports could take a yoga class in the open air.

The festival’s partners, Nexign and Selectel, awarded the best players in intellectual competitions and taught participants how to decorate their tote bags.

Professional stunt performers taught the more sporty visitors to balance on a board and perform basic tricks on skateboards and scooters.

Then, they showed everyone how it’s really done.

The most adventurous guests tried to conquer the Bolshaya Nevka on SUP boards.

A place for those are up to the challenge

Experimental Spot offered a wide range of formats to try. The comedy troupe Minskie, as well as Mikhail Kurushkin, the head of ITMO’s Faculty of Biotechnologies, Evgeny Raskin, and ITMO students, staged a stand-up show where they joked about university life.

Meanwhile, Alexey Itin, the head of the Department of Website Management, and Artyom Arushanyan, the chair of ITMO.STUDENTS, improvised about what it’s like to take a trip to the university’s Yagodnoe outdoors camp.

Participants also had the chance to embrace their inner artist by trying their hand at Korean calligraphy, watercoloring, and acrylic painting on stones.

Fairy tales and science for kids

The festival’s smallest guests had fun, too.

Rock, jazz and pop music – all on one stage

Nevertheless, the most fun was happening on the stage; even rain didn’t ruin the show but rather got the crowd even more excited.