Yesterday, 19 October, the meeting of the rectors of the Universities participating in Project 5−100, also members of the Association of "Global Universities", was held where the heads of leading universities, together with Deputy Prime Minister Olga Golodets and Minister of Education and Science Olga Vasilyeva summed up the interim results of Project 5−100. This year, 2016, marks the midpoint of Project 5−100, the program aimed at increasing the competitiveness of universities among leading research and educational centers which has already been running for three years. 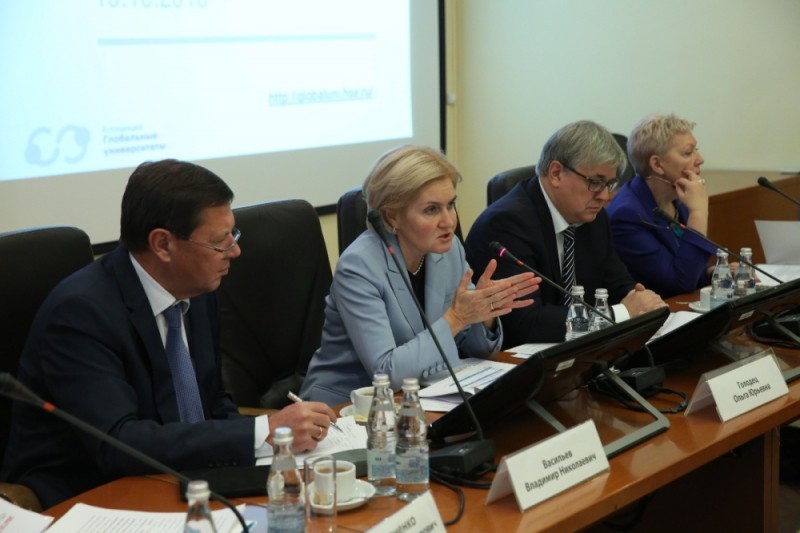 Mr. Vladimir Vasilyev, ITMO University’s Rector believes that getting into the rankings is as a result of improving a number of indicators, which the universities have been developing since the start of Project 5−100. Regardless of the university’s profile, and where they started from, Russian universities have been trying hard to make it in the world race for attracting talented students and having an excellent reputation. Vladimir Vasilyev explains how universities are reaching this success, and what concrete indicators have contributed. A number of universities increased the total amount of R & D; in three years, Kazan Federal University increased this figure by 2.5 times, reaching 1168.4 million rubles, Far Eastern Federal University increased by 2.3 times (1035.6 million rubles), ITMO University increased its volume of R&D by 1.6 times in 3 years and at the same time brought in 2286.3 million rubles from them. This increase and figure is reflected in the university entering the Times Higher Education ranking for the first time and immediately settled in third position among Russian universities. The total number of publications of the universities in Project 5−100 in Web of Science significantly increased. Some universities have significantly increased their performance in comparison with 2013, Tomsk State University began to publish 4.3 times more actively, HSE about 4 times. Thanks to additional state funding, Russian universities have become more attractive for foreign students. The number of foreign students has increased by 1.6 times compared to 2013. Universities are becoming more well known thanks to the development of open education. Between 2015 and 2016, the number of online courses posted on the national platform "Open University", increased from 22 to 82. The number of students who are using these MOOC’s has also exponentially increased, from 70,074 to 382,426 people. Moreover, over a million people from 195 countries in the world signed up for Russian Universities' online courses on the international education platform Coursera, with about 200,000 of them being residents of the U.S. and the European Union.

The Minister of Education and Science of the Russian Federation, Olga Vasilyeva pointed out that Project 5−100 will be continued.

"It is not the indicators that are important for us, but the tools and mechanisms that stand behind these dynamics," she added. Vladimir Vasilyev commented that "this proposal is very serious, in April 9 2016, in a state document that was released it was noted that Russian tertiary education is important not only in terms of institutional rankings, but also subject rankings, because the point of entry into the overall rankings is usually through the subject rankings. Therefore, it’s important to also focus on them."