Following the results of the regional semi-finals of ACM ICPC, the results of the All-Russian School Programming Contest in Programming came in. Schoolers from Almaty, Astana and Moscow got the gold here; participants from St. Petersburg shared the silver medals with their peers from Tbilisi, and the school kids from Ekaterinburg, Izhevsk, Kremenchuk and Vitebsk took home the bronze. At a round table dedicated to sports programming, such people as Andrei Lopatin and Andrei Stankevich, coaches for the St. Petersburg teams, Lidya Perovskaya, tutor at the Computer Technology Department, Vladimir Parfenov, Dean of the Information Technologies and Programming Faculty, and the world champions in programming discussed why kids from the CIS have been beating all records for the past 15 years. 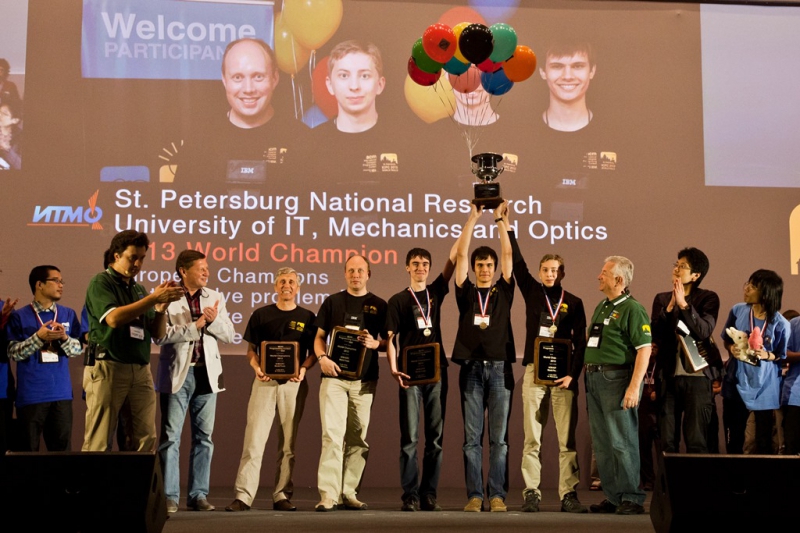 Time to root for programmers

"Programming is the future — every house now has more and more programmable devices, and this process will go on. In Soviet times, engineers were those at the frontier of progress — now the programmers are. Contests in programming are becoming more and more popular, so I'd say they have a bright future", underlines Andrei Stankevich.

Lydia Perovskaya, an experienced organizer of such events, agrees with her colleague. She believes that programming contests have a more complex structure compared to regular competitions; during the finals, teams of three compete with each other, and there can be more than a hundred such teams. The tutor is sure that a fan that is versed in programming can easily choose a team to root for.

Andrei Lopatin, coach for the Saint Petersburg State University team, notes that programming competitions are not only spectacular, but also really meaningful. According to him, modern champions easily solve tasks that seemed impossible some 10 years ago. The efficiency and speed the teams work with is getting better and better, and the code is becoming simpler, so now developing and testing programs calls for less effort. This is good for IT-companies that have to make development cheaper. "The participants of such contests are not just good at the sport, but they are on the frontier of the field, and every leading company organizes championships so as to find the best of the best — as the champions in programming are the people who think really fast and can always find an optimal solution. Actually, finding optimal decisions is a lot more important that thinking of ideal ones. So even those who didn't win the championship but got into the finals are really good at what they do — companies always fight for the chance to employ them", concluded the tutor.

Andrei Stankevich notes that sports programming is wavelike in its development, which affect the results. There are lots of factors for teams and strategies that one has to note, and the key player is often the most important. For instance, it is mostly thanks to Gennady Korotkevich that ITMO's team has been the absolute champion of ACM ICPC for the last few years. Teams who have a long-term strategy and polish their skills for years also get great results — like the team of Saint Petersburg State University that has become world champion this year. So it’s only natural when some team or player loses the top position to some other enthusiast — that means that someone moved forward thanks to effort and training. According to the coach, training is comprised of solving tasks from previous competitions so as to understand what this or that team can do, as well as lectures, common training sessions, etc. Gennadiy Korotkevich adds that different meetings where programmers gather to share their experience play a major role as well.

"Communication is really important in this sport. Teams from the CIS are successful because representatives of different universities meet, communicate and share with each other. Such events really help, they give a chance to show oneself and look at tasks at a different angle," believes the champion.

Alexey Maleev, Head of the IT Education Center of the Moscow Institute of Physics and Technology underlines that those who want to take up sports programming should be ready for several years of hard work. And no one can guarantee that in some five years one will enter at least the top ten of ACM ICPC. Still, all this hard work and collaboration with universities gives programmers from Russia and the CIS a great advantage on the global educational market. And this is why the Russian programming tradition is so highly sought after. "As of now, the question of the sports programming popularity is also an economic one. We stand at some critical point when we will soon face a new stage in IT development. This will be a new world all of us will find ourselves in — and that'd be a surprise for many. Bank systems, medicine — that all will change, auto piloted cars will become a reality, many people will lose their jobs — but there will be a lot more work for programmers. That has already begun — even in the USA, the pay of physicists and mathematicians is two times lower than that of programmers. And the countries that have such assets will make a breakthrough in the following 10−20 years", believes Vladimir Parfenov.

That is why we need these championships — to find the best of the best, talents and those who just love programming and need support. Also, our best future assets — talented children — want to participate and show themselves. They will be the ones to change the world, and there are more than 3,000 of them in Russia only; what's more — we need to find more of them. The progress goes on, adds the Dean of Information Technologies and Programming Faculty — during the last 15 years, China has already made a colossal breakthrough, and the USA still holds top positions due to their development infrastructure.

"A modern programmer starts to work right during the fourth year, if he does not go in science where the pay is lower, regrettably. And there is a lot of work out there. If we are talking about St. Petersburg, there are some 400−500 IT-companies here who try to create something new, and they are certainly a place to work at. Even those who go to work at large companies like Google often come back here", concludes the professor. Though competitive programmers are often asked about doping, the young champions still note that a clear head is most important. Stanislav Ershov, 2016 world champion shares that he likes a good sleep before the competition, as well as to eat sweet things. He also states that he doesn't want any media attention or fame — just like many scientists; he prefers to stay away from these things. Gennadiy Korotkevich, one of the few people in the world that can live off sports programming, does not believe in doping as well. According to him, it would be nice if there would be some professional recommendations for sports programmers. All in all, young programmers do not deny that someone might develop some serious doping in the future — something more potent that chocolate — but they still have no need for that.