Russian researchers have created a computer simulation that works on the word-of-mouth principle to show how information spreads among mobile phone users. The model reconstructs call paths and estimates whether the news was transferred through them or not. The program makes its conclusions based on open-source cellular communication data. According to the researchers, there is currently not enough such data to adapt the project for real-life application. Data for follow-up studies can only be provided by mobile network carriers. The paper was published in the Journal of Computational Science. 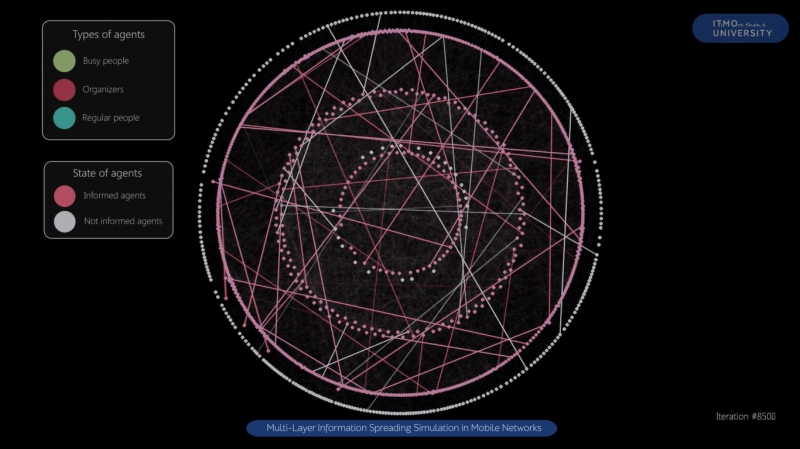 Even large cities, citizens often experience difficulties with mobile communications: either there are some loud background noises in the phone, or the network suddenly cuts off and the call is interrupted. These problems are not fatal in ordinary life. A different story is when people urgently need to inform loved ones about an impending danger or to assure them that they’re fine. If a serious accident happens, people tend to start making and receiving calls in emergency mode. Overloaded, the nearest cell towers may suffer failure.

The staff of ITMO’s eScience Research Institute have proposed a tool that can advise mobile operators how to share the load on the network to keep it from breaking down during emergencies and how to organize the work of cell towers before conducting mass events.

The computer simulation created by the scientists operates on the word-of-mouth principle and illustrates how mobile users pass information to each other when making calls. The model includes three levels, or layers; each of them contributes to news dissemination. These are the contacts network, the network of calls between communicants and direct data propagation routes.

The contacts network consists of agents – virtual people who use a mobile phone and have a certain number of contacts in their phone book. They establish strong ties with some contacts, such as family and friends, and weak ties with the rest. Each agent can call often or seldom, talk for a short or a long time, all depending on his or her phone habits specified by the developers. These features, in turn, compose the shared call network where the information circulates.

Sorting by calling activity and the ratio between strong and weak ties, the scientists divided agents into three groups: regular people, busy people and organizers. The latter, for example, make calls often, both to regular and busy people, but have short conversations, while the regular people (who comprise 94% of the total “population”) call less frequently, speak longer and often reach out to their close ones.

The speed at which contacts are alerted depends mainly on the nature of a message (normal or emergency) that scientists “plant” through several agents, as well as on the type of newsmakers. If the news is first reported to organizers, it spreads faster.

Mathematics then can predict whether the information will be passed on during a specific call or not.

“In our model, like in real life, a communicant may forget news after a conversation if it is unimportant or not relevant to them. The chain can also break when a person calls a distant acquaintance who is not interested in the message. We have accounted for this and, based on many parameters, created a formula that defines the probability of information transfer between agents”, notes Alexander Visheratin, leading author of the paper, engineer at eScience Research Institute.

The three model layers are the primary contributors to the news spreading. But the scientists plan to advance the model by including two additional levels which would account for the impact of cell towers and mobile phones. The only obstacle the researchers are facing in this prospect is the lack of expansive reali-life call data.

“The current model was built on information that could be accessed from the internet based on a few dozen subscribers , expanded by results of a survey we conducted. It was enough for the creation of a basic model, but not for solving experimental problems,” says Alexander Visheratin. “If we want to keep going forward, we have to set up a model based on data from hundreds of thousands of users. This includes info on cell tower coverage, on the number of communicants connected to them, on when a call is transferred from a tower to a tower and on the possible reasons for connection losses (leaving the coverage area, battery failure, running out of money on one’s account). This kind of data is not openly available and only mobile network carriers can anonymize it and provide it to us. But so far we haven’t been able to come to an arrangement with any of them.”