Every year on January 25, Russian students celebrate Student’s Day. This year, active members of the community including representatives from universities in St. Petersburg were awarded honorary St. Tatiana medals for their special contributions to moral education in the city and participation in the life of society. The ceremony took place in Smolny Cathedral, which in 1835 was designated as "the Cathedral of all educational institutions". Also, this year on Tatiana’s day, a special student forum for student clubs around the country was held in Kazan. The forum, called “Forward Together”, was also dedicated to the celebration of Student’s Day, was attended by more than 5,000 students from 38 regions of Russia including a delegation from ITMO University. 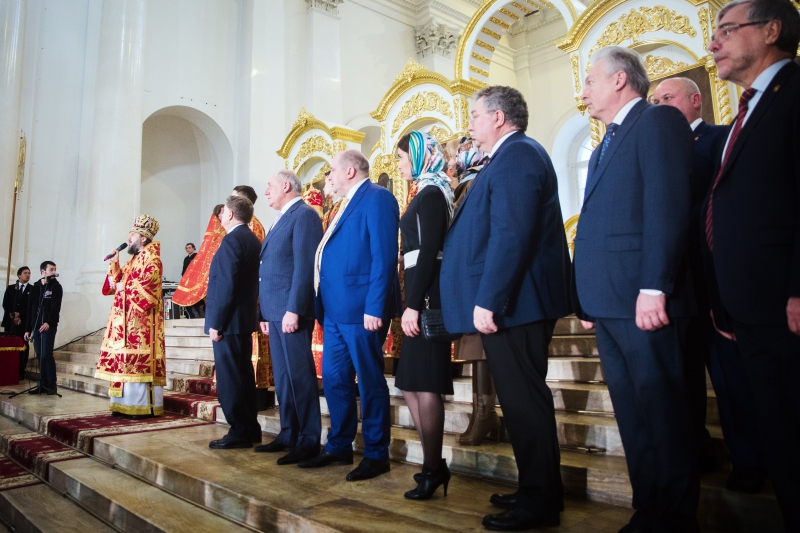 The celebration of Russian Student’s Day at Smolny Cathedral began with a special service attended by students, officials from educational institutions of St. Petersburg, and representatives of the St. Petersburg city administration. On behalf of the city’s Governor, the Vice-Governor of St. Petersburg Alexander Govorunov congratulated everyone on the celebration and thanked this year’s award winners for their excellent public service.

“Student’s Day is a celebration of being young, of those who have a creative spirit and a thirst for knowledge and discovery. This celebration is very old and it has ancient, historical roots. We are proud that St. Petersburg is known as the student capital of Russia: there are over 365,000 students studying in 170 higher education institutions here. We are also proud that St. Petersburg is said to be one of the top student cities in the world. It’s no wonder that we have representatives from 144 countries studying here. More than 20 years have passed since we resumed the celebration of St. Tatiana’s Day, and during this period we have awarded honorary medals to over 1,500 students and mentors” - said the Vice Governor.

Vyacheslav Makarov, the Chairman of the Legislative Assembly of St. Petersburg, congratulated those present on the special day, and reminded them that the core of the development of each person is spiritual. He also asked the students and their mentors to remember their history and with each day reaffirm their loyalty to the Fatherland.

"In Smolny Cathedral today, we saw a metal panel painting, created in memory of Empress Maria Feodorovna in honor of the completion of the Smolny Resurrection Cathedral. The artistic piece was re-discovered after the Siege of Leningrad. It is a reminder of the days of the blockade in Leningrad. Most importantly, today’s students must carry on a great part of the genetic code of the inhabitants of the besieged Leningrad – the code of winners, and they must understand that in every family of our beloved city is stitched a thread of the memory of heroism of great people who survived those terrible days," — said Mr. Makarov.

St. Tatiana’s medals for teaching activities and contributions to the social development of the city’s students and inhabitants were presented by members of the Rectors’ council. The medal and the title “Youth Mentor” was given to Sergey Stafeev, Professor in the Department of Physics at ITMO University.

A “youth award” was given to Roman Malyushkin, a Master’s student from the Faculty of Infocommunication Technologies at ITMO University and an active member of the university’s Volunteer Center. According to him, this award is proof of recognition that the Center's projects are indeed beneficial to society.

"Being awarded the medal is a confirmation that the tasks and goals that we set for ourselves in the Volunteer center at ITMO University, are on the right and this is not the first time that we are receiving recognition at the city level. And for me personally it is a huge responsibility and motivation to be better," — says Roman Malyshkin.

On the same day, in Kazan, a two-day student forum of student clubs was held, , called "Forward Together", which was attended by universities across the country. During the event, the students had the opportunity to exchange experiences and to use the acquired skills for the development of their University. Discussions were held in six areas: sports, art, patriotism and inter-ethnic relations, science and intelligence, IT and e-sports, and media. A delegation of 10 people from ITMO University also participated in the forum, and gave a presentation in the “Science and Intelligence” area. During the strategic sessions, the students identified the main trends, problems and areas that the student clubs need to work on. At the end of the strategic session, ITMO’s students also exchanged their experiences with representatives from other Russian universities.

The main purpose of the forum, which coincided with Student’s Day, was to promote the team spirit of students and create a collective experience for all universities across the country.

To know more about Student’s Day, its origin and how it’s usually celebrated, read our article.