We’re indeed living in the age of progress. Things change fast, maybe even too fast, and sometimes it’s hard to remember the time when we didn’t have smartphones, Wi-Fi, and access to a whole galaxy of information and entertainment. Still, while aimlessly browsing the Web in an attempt to find anything that would pique my interest, I can’t help but get nostalgic about the good old times when technology, simple as it was, was more of a miracle than some commonplace amenity. Lucky for me and everyone who feels the same, there are places that offer us an opportunity to relive this long-forgotten experience. Among them is the Museum of Soviet Arcade Machines; its exhibits, rustic and obsolete as they are, still carry the peculiar attraction of a bygone era. 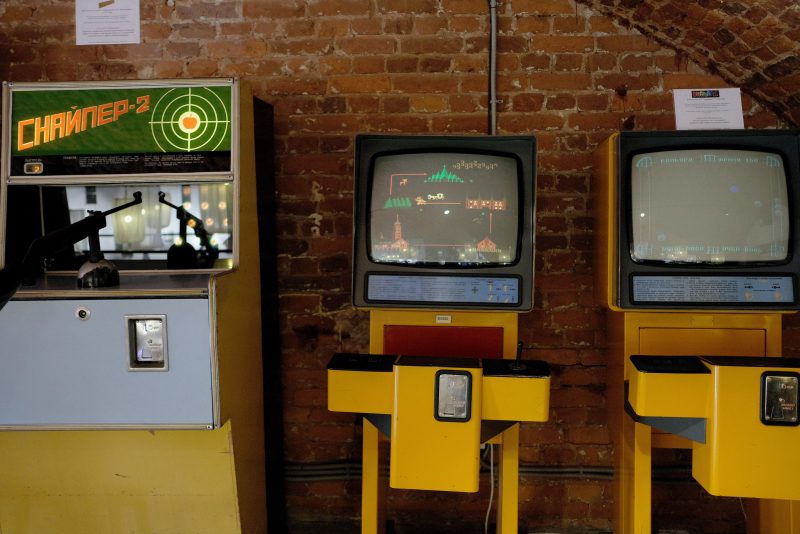 The Soviet Union was never really famous for its toys or games, so even the idea of a “Museum of Soviet Arcade Machines” sounded strange and made me curious. Still, it wasn’t until I attended the recent ITMO.GO event that I decided to check the place out: I was quite amused by the popularity of the retro games booth, and really wanted to try something of the sort.

I remember playing a Soviet arcade machine one time when I was a little kid. The bulky, loosely colored device with an old CRT display and a single stroppy controller was already outdated, and the game’s visual aspect made 8-bit graphics look like Renaissance art. Still, it possessed a strange kind of magic, leaving me completely captivated by what was happening on the other side of the screen. Though I am well aware that we tend to overrate our childhood memories, I just couldn’t wait to relive this experience.

To tell you the truth, my first impression of the museum was a bit of a dissapointment. I don’t know what it was exactly that I was expecting, but the long bar counter at the entrance, coffee tables in the back, and a bookcase with stuff no one ever reads made the place look much like your next hipster joint. Still, appearances can be misleading, so I bought a ticket, got a matchbox full of soviet kopecks (as all of the machines are originals, you have to use these old coins), and went to play.

The St. Petersburg Museum of Soviet Arcade Machines (I was quite surprised to learn that there are similar museums in Moscow and Kazan, all founded by the same group of enthusiasts) has about 40 exhibits, most of which are operational; apart from those, they have other vintage relics such as soviet soda machines, a retro photo booth, and even lockers where you can come up with your own lock code. All of those add to the place’s atmosphere; actually, it took only a few minutes for me to forget my first impressions and start enjoying myself. The only thing I regretted was coming alone, as some games are best played in pairs; also, the machine I had memories of was being repaired, but even that couldn’t spoil my mood.

The games themselves are quite simplistic; though the rules attached are all in Russian, it’s quite easy to figure them out on your own. What’s more, the place offers many other activities: on weekends there are live jazz concerts, and occasionally it hosts such peculiar events as Sozbyt, a massive garage sale where people sell and trade everyday objects and memorabilia of the Soviet era, or retro film screenings. The Museum of Soviet Arcade Machines also takes part in such major festivals as the Night of Museums, VK Fest, and Geek Picnic, which is a good opportunity to find out what it is all about.

Be it the remnants of a past that you’ve never experienced, or just a source of unconventional fun, the Museum of Soviet Arcade Machines will surely be worth your while.