2018 Student of the Year Winners on Students’ Unions, Science, and Buddy Program

Three ITMO University students were awarded the 2018 Student of the Year title after winning the competition hosted by St. Petersburg Committee for Science and Higher Education and the Rectors’ Council of St. Petersburg and Leningrad Oblast. In this interview with ITMO.NEWS, the winners shared about their backgrounds and plans for the future. 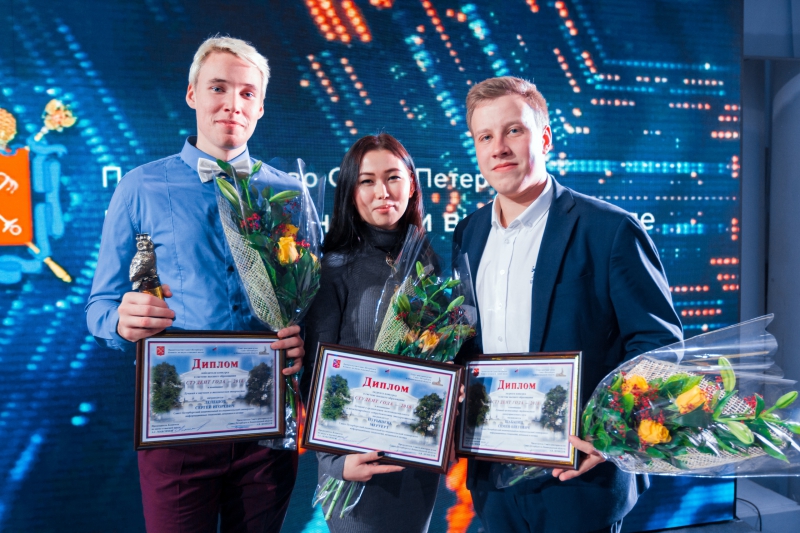 Why did you decide to take part in the competition?

I think that it never hurts to try. According to the competition’s results, ITMO University has the highest number of winners, and I hope that next year we’ll go even further, and in some five years, we’ll have awards in every nominated category. We have already earned awards for volunteering, students’ unions and science. Only a few categories are left.

What do you think about the student government at ITMO?

In my opinion, our student government is one of the best in Russia. We don’t look at others but come up with our own ideas instead. For example, we eliminated the border between different students’ associations such as the students’ council and the trade-union committee. We made these a single unit where people can ask questions and get their answers right then and there. That’s how it should really work. We also encourage our students to contact us with their questions online, so that they don’t have to waste time traveling from one building to another.

In addition to that, we often host various cultural events, for example, movie evenings, for our students not to feel lonely in this cold rainy weather.

Aren’t you tired of answering other students’ questions?

No, not at all. It’s much easier to answer these questions when you’re a student yourself because you have to solve the very same problems. I just share my own experience with them. I really enjoy working with people and trying to help them. I’m happy when people around me are happy.

Sergey Lepeshov, Master’s student at the Faculty of Physics and Engineering, the winner in the Science and Creativity category

What makes science interesting for you?

Science gives you the freedom of imagination and creativity. As a researcher, you can work wherever you like. For instance, you can make a good portfolio and go abroad, and then come back. Besides, if you work hard, science can be quite a profitable business. I study photonics, and particularly the interaction of light with nanostructures.

What is your research about and how can it be applied?

I study the interaction between transition metal dichalcogenides and dielectric nanoantennas. This is a class of two-dimensional semiconductors like graphene. This field has many possible applications, for one, in polariton lasers, which may serve as a platform for photon sources in quantum and optical computers. Thanks to these new devices, some calculations that we now believe impossible will soon become reality. For example, it now takes days and days to model the interaction of drugs and a human body or the trajectory of millions of stars circulating in our galaxy, while such computers will calculate it in a minute. It will contribute greatly to such fields as biology and medicine, not to mention artificial intelligence.

What do you plan to do after completing your Master’s degree?

I would like to pursue my PhD studies in a double-degree program at ITMO University and some Australian or American university.

Meruert Nurysheva, Master’s student at the Faculty of Cryogenic Engineering, deputy head of the International Student Club, the winner in the category ‘Organization of intercultural and international cooperation (tolerance)’

What is your job at ITMO University?

Since 2016, I have been responsible for taking care of incoming international students. My job is to facilitate communication between students from different countries and to avoid possible conflicts. ITMO University strives to become one of the world’s best educational institutions, and that’s why we have to address the challenges posed by globalization. We must be recognized worldwide.

We host a whole range of cultural events for international students such as national cuisine festivals, the Russian language speaking club, to name just a few.

What projects are you currently working on?

The main project I’m working on now is Buddy System. This is a program aimed at helping international students cope with the pressure of being away from home. Last year, 26 international and 25 Russian students took part in the program. This year, the number of students doubled: a total of 91 international students came to study at ITMO, 41 for the autumn semester and 50 for summer schools. Our task is to help them adapt to new conditions and establish international collaboration.

How does the program work?

Our partner-universities send us information about the number of incoming students and based on this information we invite Russian students to participate in our program as ‘buddies’. We welcome everyone interested in communicating with foreigners, as well as improving their English and making friends from all over the world.

In a year’s time, the Buddy System has achieved good results. For instance, the number of international students has risen significantly. The thing is that after spending an exchange semester at ITMO, students share about our university with their friends in their home countries, and it can really make a difference. Last year, there were five students from France, while this year, there are 25. The system is beneficial for Russian students as well, as if they decide to study abroad, they’ll have acquaintances there.

Now I plan to devote all my free time to writing my Master’s thesis and preparing for my PhD exams.