Having graduated from ITMO University’s double-degree PhD program with the University of Bonn, Mikhail Galkin decided to stay in science despite numerous work offers from leading companies. In this interview with ITMO.NEWS, the researcher shares about his experience of studying in Germany, working with industrial partners and traveling the globe while at it. 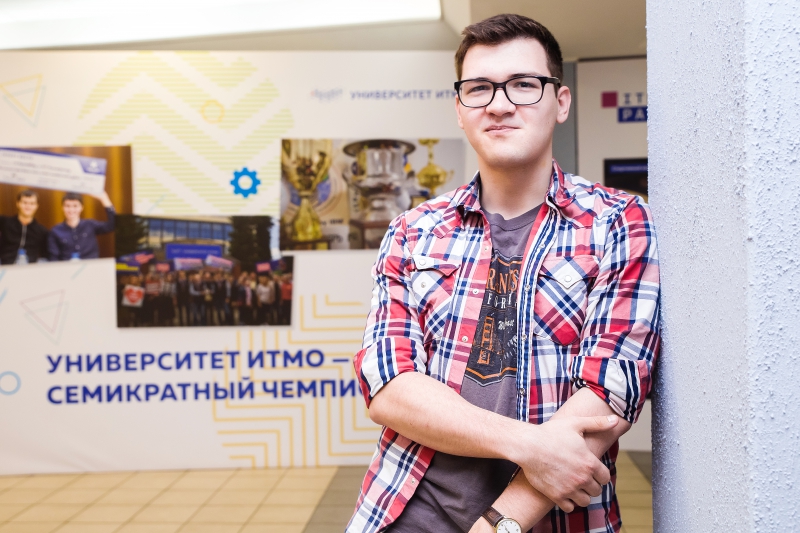 Can you tell us more about your educational journey?

I graduated from ITMO’s “Computer Technologies and Control” specialist program in 2014. By that time, I’d already had the experience of working part-time for several companies, and had to decide whether I wanted to stay in science or opt for working in the industry instead.

The decision was fairly simple, as I was really interested in topics my research was exploring. I wanted to continue with my work, to dig deeper, to expand my knowledge. I’ve been obsessed with computers since I was a kid, and it was because of this that I ended up at ITMO.

What does your research focus on?

I study artificial intelligence, knowledge graphs in particular. Simply put, knowledge graphs are machine-graspable data for artificial intelligence systems. Suppose we were to ask Siri two questions: where St. Petersburg is located and in what way cars of the Lada brand differ from that of Ford. To answer our first question, Siri only has to refer to the general body of knowledge, but for the second one, it’d have to access specific kinds of data, for example, those about engine combinations or something of the sort.

I research both the applications of knowledge graphs and how they’re created in the first place.

When and how did you get into this topic?

I got into this field in the final years of my specialist’s degree, that is, even prior to my PhD studies. In this I was supported by ITMO professor Dmitry Muromtsev; we started with simple projects and gradually moved on to writing research papers and participating in thematic conferences. Once I acquired enough academic experience, I applied for a scholarship of the German Academic Exchange Service (DAAD). My application was approved, and from 2014 up to the end of 2018, I was studying on a double-degree PhD program carried out by ITMO and the University of Bonn in Germany. It’s worth noting that I was abroad for all of this time.

Did you find doing research in Germany any different from what you’d become used to in Russia?

I surely did. The first difference is the scale of it all. There are more PhD students in Germany, the clients are bigger, and requirements are of a higher level. We would write articles for major conferences, which get thousands of applications and approve only about 10%. You had to present some world-class research to be approved for participation.

There’s also this practice there that students are taken on to work on large-scale projects that last for three-four years and are closely tied in with the topic of your thesis. This allows you to juggle between working on huge projects, attending conferences with grant funding and writing articles to pass your PhD exams. For example, for our most recent project, which was commissioned by a major German industrial partner, we had to develop a dialog system to be used in cars so that users could chat with their car while driving and ask about the situation on roads or different sights they’re passing by. We presented it at an expo in Hannover.

Everyone is very friendly, and the whole experience is very international. From 80 people in our team, only 10 or 15 were actually German. Others came from all over the world: India, Asia, South America, Spain, France, and the CIS. Many were supported by DAAD scholarships like I was.

As a student of a double degree program, I still had to go to Russia twice a year, to pass my exams and partake in half-yearly reviews where they look at how your thesis is progressing and the number of articles you pen.

What I enjoyed most about my double degree program was the abundance of opportunities for travel. There are always conferences and project meetings for you to attend. One year was particularly memorable in that I had eight publications afoot, and so the first six months I spent writing, and the other six I was traveling. I visited France, the US, Spain, South Korea. Being a scientist, you can work and travel the world, all at the same time.

Building bridges with your international researchers is a breeze; most are more than happy to cooperate. So you can easily dash off to Italy to see your colleagues there or assemble a consortium with specialists from different countries and companies.

Did you combine your studies with work?

I did, but only part-time, as the law forbids international students otherwise. I did some industrial projects, but the main bulk of my work was at the university: I gave lectures and helped students prepare for their assignments and exams. This experience is coming in handy in my current work at ITMO: my colleagues and I have developed a pilot course on digital culture and right now are creating one on knowledge graphs. Information about them in Russian is scarce, and only a handful of companies pursue them as their specialization. The community is very small.

What future do you see for AI technologies?

I think that they will only continue to grow in popularity. In Germany they’ve long entered the industrial mainstream, enabling the gradual development of the industry 4.0. A wide variety of fields are now starting to use machine analysis, from biomedicine and computer vision to natural language processing. We see that more and more people are interested in this type of technology.

Is it difficult to break through in AI career-wise?

It’s not as difficult as people think. All you need is interest and motivation, plus a good level of theoretical knowledge. But I don’t think that ITMO students will have any problems with that; everyone here knows the fundamentals of maths, physics, and linear algebra, and they’ll teach you all the rest.

Writing articles, working with students and participating in scientific events abroad in general isn’t as hard as it may seem at first glance. Too many times I was told that that was impossible, and it feels great proving this statement wrong. Every student has an opportunity to make a start in science and use their knowledge both for themselves and the industry, and see that the results of their work are in fact in demand.

And how possible is it to to get a DAAD scholarship?

In the main, everything is pretty simple. The competition is ongoing, taking place every year for both short-term and long-term internships. The year that I applied for my grant in, there were some ten winners in St. Petersburg alone. You don’t even need to know German to succeed; both PhD work and studies are done in English, though things may vary depending on your research group and field.

Do you plan to stay in Germany?

As of now, I have a blue card that allows me to work in the EU. I’ve also been offered to continue my research at the new Center for Explainable and Efficient AI Technologies (CEE AI) in Dresden. But I’m still going to keep in touch with ITMO; for one, I’m contributing to the development of online courses, and also serving as a scientific advisor for some Master’s students.

What is your final word of advice for students?

They don’t punish you for asking and trying. You have to be active, to try and persevere, not looking back at those who don’t support you and your efforts. I followed the updates in the VK group for ITMO’s PhD students, clicked on links, filled in forms. One time, I even got to go on an internship to Stanford University, which is considered to be one of the world’s best higher education institutions. As I was told later, there were 50 places available, but only 30 students actually applied to participate.

Many people refuse to believe in themselves and think that there’s no use in trying because they’re bound to fail. But opportunities are out there, they are up for grabs, you just have to try and let the cards fall where they may.