On April 28, the Russian city of Tomsk hosted RoboCup Open Russia, the national round of the RoboCup 2019 international robotics competition. The event brought together 120 teams and 500 participants of different ages, from school children and to university students and graduates, including the members of the Youth Robotics Laboratory of ITMO University’s School of Computer Technologies and Control, who presented their new robot ELSA and took the second prize in the competition’s most creative category, RoboCup OnStage. 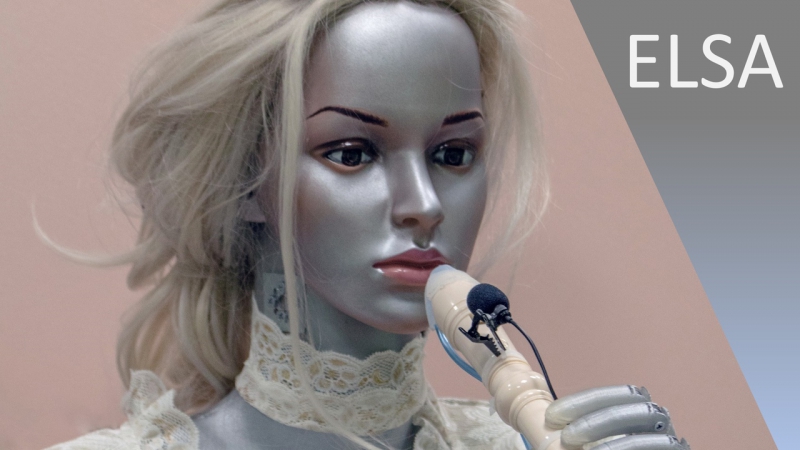 At the end of April, the Tomsk Entertainment and Sports Center housed dozens of robots, which did all sorts of things, from flying, playing football and navigating the terrain to moving objects and giving live performances.

The students of the Youth Robotics Laboratory of ITMO University’s School of Computer Technologies and Control (Vasily Dunaev, Dmitry Kharlapenko, Maxim Mikhailov, Daniil Nechaev and Levon Pogosov) together with their coach Igor Lositsky partook in the competition in the RoboCup OnStage category and presented their new robot ELSA, a beautiful humanoid playing the flute, who has become the second member of the Laboratory’s robotic musical band.

“We have always been interested in the fusion of robotics and art. Do you remember our first robot Seldon, the lead guitarist and singer of our band? Now we decided to build him a girlfriend. This time, it all started with a flute that somehow made its way to our laboratory,” shares the team’s coach Igor Lositsky.

Compared to cyberpunk kid Seldon with his lightbulb eyes and a spaghetti hairdo of wires sprawling around his head, ELSA is from a different era. When looking at her, one would never call her a robot: aristocratically fair and fine-featured, wearing an elegant ivory dress with a high-necked lace detail, she rather resembles a porcelain doll from a Baroque musical box.

However, behind the fine, delicate appearance, there are complex hardware and software systems: pneumatic mechanisms, air inlet valves, as well as machine vision and machine learning technologies.

“It’s a musical duo of a robot and a human that we decided to present at RoboCup Open Russiа,” says Igor Lositsky. “Dmitry Kharlapenko, one of our team members, plays the guitar, and he volunteered to accompany ELSA. What makes our robot truly special is that she can recognize chords and their sequences and even generate pentatonic scale notes, which makes her an excellent duo partner.”

The show consisted of two parts: an improvisation and a prepared performance. According to Igor Lositsky, the robot’s current setlist consists of several MIDI files, including the theme song from Pirates of the Caribbean, and Beethoven’s Ode to Joy.

It took the team just two months to complete their project. Their project was chosen out of eight projects by the jury that consisted of ten members: three independent experts and seven representatives of the teams.

The first place in the RoboCup OnStage category went to the team Nonstop from the St. Petersburg Presidential Physics and Mathematics Lyceum 239, who presented their robot Pinotino, a hybrid of the Russian Buratino and the Italian Pinocchio capable of recognizing numeric symbols and making jokes. The third place went to team Yo! (Ё!) from Ekaterinburg.

The winner of RoboCup Russia Open 2019 will be invited to participate in the final round in Australia, as well as the European Tournament in Germany and the Championship of the Pacific Rim.