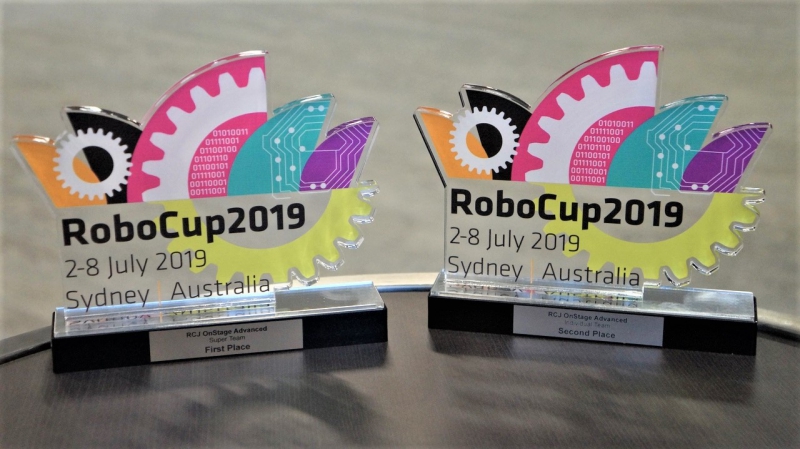 Prior to going to Australia, the members of the Youth Robotics Laboratory of ITMO University’s School of Computer Technologies and Control (Vasily Dunaev, Dmitry Kharlapenko, Maxim Mikhailov, Daniil Nechaev and Levon Pogosov) took the second prize at RoboCup Open Russia, the national round of RoboCup 2019 competition held in Tomsk. Though first place went to another team, the RoboCup expert board decided that ITMO University team should also be given an opportunity to compete “on a big stage”.

RoboCup OnStage is the category which ITMO University’s Youth Robotics Team coached by Igor Lositsky traditionally competes in. Within this category, teams have to give a performance featuring the robots they’ve designed, which have to interact with people and be part of a stage show.

ITMO University robotics team went to Australia with their humanoid ELSA, a talented flute player who can do an improvised solo show or play in a duo with a guitar player. The robot can recognize chords and their sequences and generate pentatonic scale notes, which makes her an excellent duo partner.

“When preparing for the final round in Australia, we paid thorough attention to the perfection of ELSA’s technical characteristics; everything had to work as smoothly as possible. We resoldered all the electrical components, improved the mechanism that allows her to move her hands, and also made the sound a little bit smoother,” shares Igor Lositsky.

The final round of the competition is held in three stages. The first is a technical demonstration. Participants show their robots as they are, without any decorations; the only thing that matters here is the devices’ technical properties. During this stage, teams present their robots to the jury and share about how they work. The demonstration is followed by a technical interview, during which international experts ask questions about the projects’ details and characteristics. And finally, the third stage is the performance itself. Each team is given two tries to complete the task.

“We had a restart during our second try and lost five points. Hadn’t it been for that, who knows how things would have turned out,” adds Igor Lositsky.

It’s not only the technical characteristics of the robot that ITMO University team had worked on prior to the final round of RoboCup, but also the concept of the show. While the performance in Tomsk ends with ELSA joining the guitar player performing the theme song from Pirates of the Caribbean, the Sydney show is much more dramatic. Now, the romantic duo and the robotic flowers surrounding them are joined by one more character, a pirate, who dances the robot away from her duo partner.

“Of course, it’s not theatrical details that the jury pays most attention to when assessing the performance, but it can definitely do its bit,” notes Igor Lositsky. “In fact, we are really glad to be second. There were lots of very good projects this year that deserved victory, and the competition was rather tough.”

Among this year’s winners are teams from Singapore, Russia, and the US (first, second, and third places respectively).

In one of the categories, RoboCup OnStage Advanced SuperTeam, in addition to individual performance participants also had to join forces with other teams. To win in this category, participants were required to work together with other teams and come up with a performance that would go in line with this year’s topic “Save the World” and be somehow connected to Australia.

ITMO University participated in the competition together with other Russian universities, as well as universities from Mexico and China. Coaches were not allowed to help their students. The main task here was to show excellent communication and teamwork skills, that’s why the students chose the topic in which they could all work together, namely “Saving Koala Bears from Fires and Pollution”.