Fedor is Russia’s first anthropomorphic (humanlike) robot. On August 22, it will fly to the International Space Station (ISS) to perform a range of tasks under the guidance of a fellow, this time fully human, astronaut. Going forward, Fedor will serve as the first test pilot of Federation, a new Russian-made piloted spacecraft set to launch in 2022. It is also possible that Fedor will perform a round-the-Moon flight aboard Federation. In this article, ITMO.NEWS gives a profile on Fedor, explains why a robot needs to be humanlike to work on the ISS, and what ITMO University specialists think of the development. 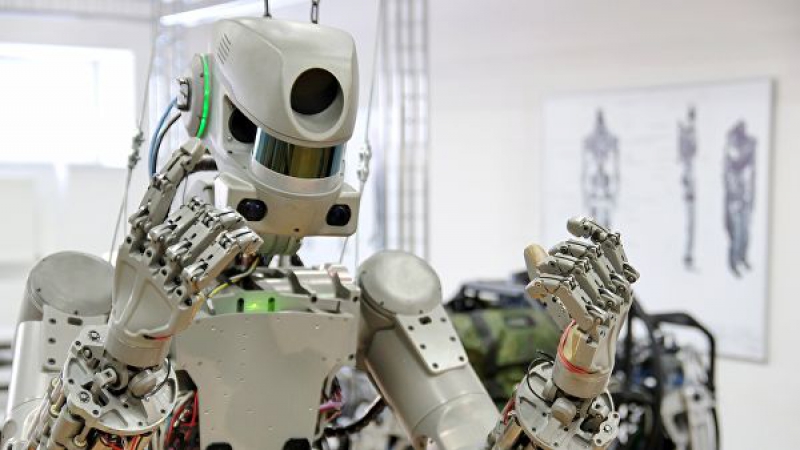 FEDOR, standing for Final Experimental Demonstration Object Research, is Russia’s first anthropomorphic robot. Measuring up to 180cm, weighing some 160kg, and boasting the capacity of 20 horsepower, it was developed by the Russian Foundation for Advanced Research Projects in the Defense Industry together with the Android Technologies nonprofit on commission of the Ministry of Emergency Situations of the Russian Federation as a rescue robot. The development is based on the previous models of robotic devices created by Android Technologies on the commission of the Roscosmos State Corporation for Space Activities (the models SAR-400 and SAR-401).

Its development ongoing, the droid has been in the works since 2014, with the first prototype appearing in 2016, together with first mentions about it. Fedor’s main vocation is saving lives. It is able to work in conditions of radiation and chemical contamination, and conduct the sorting of radioactive waste. Thanks to the well-developed motility of its “hands”, the robot can also be used for industrial and medical applications.

“It’s still unclear how justifiable is the concept of an anthropomorphic robot working on a space station. Generally though, when there is direct interaction with a human, this format can be considered appropriate because from the interaction’s standpoint, it’s easier to read the robot’s intentions and actions if anatomically it resembles a person. In regard to the utility, if we were to leave the interaction aspect and the specific space station location aside, it wouldn’t matter as much should the robot be anthropomorphic or not. However, you could still use solutions with some degree of human resemblance,” explains Sergey Kolyubin, head of ITMO University’s International Laboratory of Biomechatronics and Energy-Efficient Robotics.

The robot also has a couple of extra tricks up its sleeve. For one, it’s the first of its kind to achieve a full split and shoot a gun from each of its two hands at once (because of this, Fedor’s manufacturer was deprived of access to a number of internationally-produced parts, in spite of not being claimed as a military device). Fedor can identify typical objects and tools and discern between obstacles, combining all this in a 3D location map. The versatile droid opens doors, operates an electric drill, and drives cars and all-terrain vehicles in an autonomous setting. It can also work as a double, repeating the movements of an operator clad into an exosuit that resembles Fedor’s structural features.

The first prototypes of the robot were managed by an operator. But being a self-learning system, Fedor has since moved on, training itself to be capable of autonomous movement. Using different sensors (such as microphones, GPS, Global Navigation Satellite System, range-measuring lasers, cameras, including a thermographic one, and a special self-positioning system), the robot gathers data on its environment and its parameters. In the future, its developers plan to enhance Fedor’s functionality with the ability to independently identify tasks. For example, if the robot sees a person who has been hurt and needs help, it should be able to work out what should be done for this help to be effected (carrying the person to a safe space, as an option).

“Robots need to be anthropomorphic because everything there is on the planet was designed for people, everything there is to our civilization, the conditions we live in today and the services we use. To enable a robot to function in the same conditions humans function in, it needs to have the shape and the abilities of a human. You can produce a bespoke, non-anthropomorphic robot for each and every spacecraft, and maybe it would be more functional, but it wouldn’t be universal. In this case, anthropomorphicity is a universal tool. A robot like that could work in any environment it finds itself in,” says Igor Lositsky, head of ITMO’s Youth Robotics Lab.

The robot consists of 15,000 machine parts and runs on a Linux-based real-time operating system developed in St. Petersburg. The robot is charged using a regular socket; a full charge allows it to function autonomously for an hour. It’s known that 50% of parts for one of Fedor’s prototypes were manufactured in Russia, with the remaining ones specially commissioned from around the world including such countries as Switzerland, the US, Japan, Germany, and others. But there is no data on the exact percent ratio of the national and international components.

“In terms of the components, what matters in the end is not their country of origin but rather how they are used. We consider iPhones to be an American product while 99% of their hardware is made in China. But we understand that an iPhone is first and foremost about the software it’s equipped with. The same is with robots: it doesn’t make any difference which sensors and cords were made where: the main thing here is the principles the system operates on,” comments Sergey Kolyubin.

The anthropomorphic robot “Fedor” will fly into the International Space Station on the Soyuz МС-14 spacecraft on August 22, 2019. Before the launch, it was given a new name: Skybot F-850. According to some news sources, the robot had to meet the usual Russian requirements to qualify for the flight to the ISS, with no additional ones being put forward by NASA. When there, under the guidance of astronaut Alexander Skvortsov, Fedor will perform a number of tasks, but their exact nature is highly classified and will be made public only after the mission’s conclusion. The robot is planned to return back to Earth on September 7, 2019.

“In 2011, I participated in the Robonaut project, implemented by NASA and General Motors. The project had the same underlying idea: to make a robot which could reside within the ISS and help the astronauts there with the conduct of their missions whilst being controlled remotely or even autonomously. This robot has recently been picked up from the ISS, having spent the majority of its time either packaged up or broken. The key problem was that direct physical interaction with people calls for specific methods of the robot’s movement control, and it turned out that this results in a low quality of how the robot is being positioned. Humans suffer the same problem: we are not that precise in terms of positioning. But if a robot finds itself in the conditions of zero-gravity, some uncontrolled movement will occur. In our project, we used a limb structure that would allow the droid to grasp onto something in the surrounding space and perform different work tasks. The robot Fedor is based on a similar operating mechanism. In general, the approach applied is not new, and I’d like to believe that the authors took the mistakes of the Robonaut project, which ended up by being closed down, into consideration,” says Sergey Kolyubin.

In the future, Fedor can become the first tester of Federation, a new Russian-made piloted spacecraft which is planned to lift off in 2022, being launched by the Soyuz 5 (Irtysh) carrier rocket from the Baikonur Cosmodrome. A potential round-the-Moon flight on Federation is also in the cards for Russia’s pioneer anthropomorphic robot. The latest estimates, available for April of 2019, put the project at 300 million rubles, but the work is still continuing.

“Robotics has great potential in space. There are projects in which robots work outside of the space station, and they do indeed carry some operational load. Robots are a tried-and-true solution for the so-called 4D (dirty, dull, distant or dangerous) environments. Space is all of these things, and that’s why there’s a lot of work for robots there. I see more opportunities for robots beyond the bounds of the ISS, where a human being would find it more difficult to operate. Each venture into the outer space amounts to some very taxing loads,” explains Sergey Kolyubin.