ITMO University’s Infochemistry Center grew from an eponymous research group led by professor Ekaterina Skorb, formerly a group leader at the Max Planck Institute and Harvard researcher working under one of today’s most cited chemistry experts. Among the Center’s priority areas are interdisciplinary research at the intersection of mathematics and chemistry, experimental chemistry, and the introduction of hi-tech approaches into the industry. But its staff collaborates not only with mathematicians, biologists and IT specialists, but also artists. ITMO.NEWS spoke to Ekaterina Skorb about the Center’s tasks and projects. 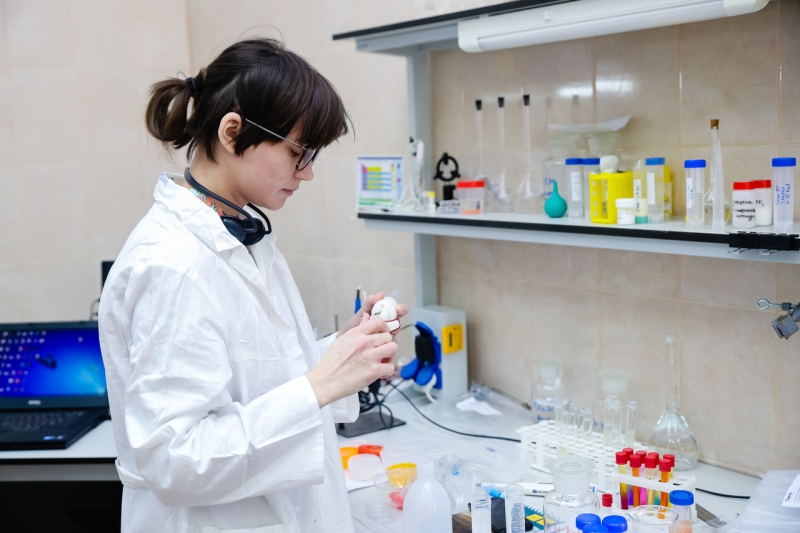 Infochemistry: uniting chemistry, maths and IT

In the words of ITMO University professor Ekaterina Skorb, infochemistry is an experimental field of chemistry that studies the storage and processing of information on the molecular level. It is the development of this field that Prof. Skorb, whose career record includes leading a research group at the Max Planck Institute and working at Harvard under the world-renowned chemist George McClelland Whitesides, started pursuing upon joining ITMO University.

In just two years, her efforts led to the creation of a research group on the infochemistry of self-organizing systems. Today, the group conducts work in a wide range of topics, from the creation of artificial cells to systems for bacterial biofilms programming, smart dynamic materials, light-activated diagnostic systems and the studying and modeling of nonlinear chemical processes.

Apart from that, the group collaborates with specialists from a multitude of different fields: experts in maths, robotics and IT from Russia and other countries. For one, in October 2019 the group’s scientists partook in a workshop organized by ITMO together with the University of Liverpool. The event brought together 30 specialists in the field of chemistry, maths, physics, IT, control systems, and robotics.

As highlighted by Ekaterina Skorb, the foundation of the Center was a natural next step: in two years, the infochemistry research group expanded to several dozen staff, with many of them implementing their own independent projects supported by the Russian Science Foundation. Working as part of the Center today are some eight research groups.

“We pursue ambitious goals and work towards the goal of creating an artificial cell, as well as applying supramolecular chemistry to the coding of information in general. At one of the conferences, we met Nobel laureate Jean-Marie Lehn, and despite the fact that due to his busyness he has long stopped participating in any kind of advisory boards, he wrote us an official letter of support in which he expressed interest in our ideas. We now also have industrial customers, namely for our sensorics and personalized diagnostics system,” shares Prof. Skorb.

The Center is developing in two directions: fundamental and applied. But both of these are connected by its work in the field of nonlinear complex chemical processes.

The Center’s fundamental work is represented by its research on the development of artificial cells and chemical computers. This work is supported by, inter alia, the Russian Foundation for Basic Research and Russian Science Foundation.

The applied work encompasses projects aimed at the development of new approaches in the field of personalized diagnostics and nutrition; here, the Center’s scientists collaborate with Anatoly Skalny, professor and doctor of medical sciences. Also belonging to this research category is the development of sensors for the analysis of early stages of kidney stone disease (this project is supported by the Russian Science Foundation).

“Projects like this can also be called fundamental, because the research process involves collecting large amounts of data. We developed a special program that would accumulate this data. We are currently studying various aspects of how it should be collected, stored and analyzed. In this we are collaborating with IT specialists. ITMO University is perhaps the best place for such collaborations. Diagnostics is exactly the field we feel we have potential for development in: we have managed to assemble an interdisciplinary team thanks to which we can garner this data and, in the future, use it to forecast specific processes,” notes Prof. Ekaterina Skorb.

What is more, next year the Center plans to launch a new Master’s program the education process of which will be built on the basis of selective module courses. The courses will be delivered, among others, by invited professors from international universities. The program will provide students with not only knowledge in the field of chemistry but also strong mathematical training.

Apart from scientific research, the Center’s scientists are actively involved in other interdisciplinary projects, including those in the field of Art&Science. For instance, the specialists successfully implemented a project with ITMO’s Creative Lighting Department, which resulted in the development of an autonomous light-sensitive robot.

And this year, Ekaterina Skorb became one of the speakers at Art&Science Day Skolkovo, a partner and scientific program coordinator of which was ITMO University’s Art&Science Center. It was there that the researcher met the team of Stenograffia, Russia’s largest street art festival.

In the ten years of their work in a Yekaterinburg-based laboratory, the artists managed to implement a wide range of projects, including a robot-printer that created frescos on the walls based on a neural network sketch, a fence coming to life with the sounds of Rachmaninov’s symphonies, objects being photoshopped out of reality, and many others. The team often uses new materials and technologies in their works. One of their projects was dedicated to the K-141 Kursk submarine that tragically sank in 2000, killing all 118 personnel on board: the supporting wall of the city pond was emblazoned with an 11-meter inscription of “Kursk” which was impermeable to water as a waterproof aerosol paint was used in its creation.

The Stenograffia team has recently made a visit to the laboratories of ITMO’s ChemBio Cluster, where the members familiarized themselves with the projects conducted by the infochemisty of self-organizing systems research group. Apart from the tour, the artists attempted to set in motion an entire system that involved the formation of silver rings in agar. Following the results of the visit, the artists and scientists came up with an idea for a new project.

“The project is still in development. But according to the main concept we discussed, this will be a picture that at first doesn’t seem to exist, that is, the viewer doesn’t see it, and then it suddenly grows apparently out of nothing. We will be responsible for the scientific side of the project, while its concept will be carried by the Stenograffia team,” says Ekaterina Skorb. “To explain it from the scientific point of view, such a system can essentially be implemented on the basis of precipitation which occurs in time and is controlled by diffusion. The products of this reaction would then be changing their color. This can be compared with the art of photography, which in fact includes a great deal of chemical work.”

As noted by the ITMO professor, scientists are interested in the projects like this one as the latter can get the public excited about chemistry. Even today, the ChemBio Cluster’s doors are open to anyone interested in science. For one, its laboratories often welcome school students.

“First and foremost, I am a scientist, but we are open to any projects and opportunities that would allow us to show and tell just how wonderful the field of science is. We regularly give presentations at different venues, showing what we do here in our Center. This is important because society must understand what scientists do and which projects it, effectively, funds,” notes Prof. Ekaterina Skorb.