Science Is Fun: All About the Fifth Quantum Potential, ITMO’s Science Stand-Up Show

The “Kosmonavt” club once again turned into a haven for intellectual stand-up enthusiasts, who came to the latest installment of “Quantum Potential”. Business, IT, Big Data, a scientist’s imagination and the future of science were some of the topics on the table. The limelight, however, was on jokes and stories, as well as four professional scientists, two stand-up comedians and over 300 guests. Read on for the best puns and discussions heard on the show. 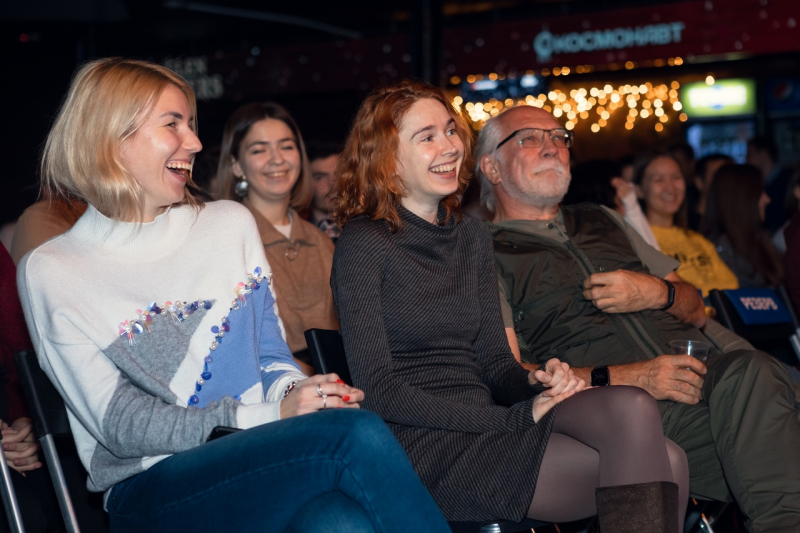 What is there to laugh at?!

“Quantum Potential” is an original show created by ITMO University. Science is a very popular topic. We talk about it in many languages, we write about it, we explain complicated facts to children, we learn more of these facts via podcasts and cartoons, but stand-up is a rather unconventional format for academia. At the same time it is anecdotes about the life of a scientist that are the best ground for communication. If people laugh at the same things, they share a certain connection.

“Science is actually a lot of fun. Naturally, one can make fun of something more commonplace, like everyday life or bizarre interactions with people on the subway. But it is much more fun to joke about something you know very well, and in our case it’s science and technology. There is a demand for such jokes and stories on our show both from our hosts and our guests. Taking part in the show is, of course, a challenge for any scientist. They are used to presenting their work at various conferences or giving lectures, it is their natural habitat, but doing stand-up in a club is something totally different. That is why the show leaves such an impression on them; they value recognition and laughs from the audience,” shares Alexander Gostev, the founder of the show, public relations specialist at ITMO University.

There was even more science in the fifth “Quantum Potential”. According to the organizers of the event, even Nidal Abu-Gazale, the host of the show, and Seva Lovkachev, the invited comedian, were mostly targeting scientific news.

A funny joke or something to learn from

The first up was Artyom Volovikov, a PhD in Engineering Sciences and the founder of ARSKA Technologies. His topic was “Hirsch or Cash”. In his talk, he compared businesspeople and scientists. Artyom presented a stereotypical businessperson on the hunt for profit, juxtaposing the image to that of a research-oriented scientist, denying any sort of material gain. He demonstrated that there were not as many differences between the two types and shared his personal experiences of a scientist comfortably navigating the business sphere.

Next came the talk by Ekaterina Pudanova, a graphic design team lead at Wrike. In her stand-up, called “You Can Never Be a Former Scientist”, she elaborated on her personal experiences of becoming a scientist and then deciding it was not for her. She also explained why her interest in science stays strong even though she is professionally involved in another field.

“I have been doing stand-up at open mics for some time, but then I realized I want to perform for a more educated audience, so I strove to get here. “Quantum Potential” is something different: here I can make jokes about the theory of relativity and people will understand why these are funny. Usually stand-up is not like that. You are supposed to pick other topics there, but I wanted to talk about something more complicated. Scientific jokes are more complex, they are deeper. I think this show can be really beneficial for students, because it is an opportunity to see real-life scientists who went through a similar ordeal. It is almost like career guidance done in an entertaining way,” said Ekaterina Pudanova.

The third talk was by Vladimir Ulyantsev, the Head of International Laboratory “Computer Technologies”, with the topic “”Why Scientists Find It More Interesting to Be in Their Head”. Vladimir speculated about the world that a scientist actually lives in, while also trying to understand where the future of humanity is born and underlining the reasons to stay in tune with yourself.

“The story I have just told you is actually not about scientists or programmers. It’s not about ITMO either. It is about every one of us. We all have our imagination, our own worlds and our own reasons to distance ourselves from other people. I urge you to always remember that anyone you talk to has their own world inside their head. A world you cannot measure with your standards and values,” concluded Vladimir.

Last came Artyom Egorov, ITMO University graduate, a mathematical analyst, a CTO and cofounder of BI-Tool.ru. His talk “More Big Data!” was full of his professional experiences in collecting user data. He also discussed how much companies are willing to pay for your attention on the internet, how one can sell it, and why only 1% of all ads hits the target.

“It was my first time as a stand-up comedian. It was great, thanks to the organizers, who spent multiple evenings helping me come up with the jokes. I was very nervous, although I had made presentations at conferences before, but stand-up turned out to be a completely different thing. Presenting the seemingly boring topics in an entertaining way requires talent. Thanks to this show, I discovered that there is actually a decent sense of humor hidden inside me, I was glad to see the audience laughing. We take the little things from our work lives, the notes we make on the margins, and people listen to them, they understand – it is a crazy experience,” shared Artyom Egorov.

Over five seasons, “Quantum Potential” has changed its venue, grown a substantial following and taught comedians to make jokes about science. It will only get better from here. The organizers shared that they intend to continue developing the show, making it more popular and entertaining. They also noted that young scientists, PhD students or researchers are always welcome at the show. Contact the team, tell them a little bit about yourself – and the stage of “Quantum Potential” is yours for the taking.